Mindy was a character who first appeared in the ninth episode of the third season in The Vampire Diaries. She was a werewolf from Portland, until she was successfully turned into a hybrid by Klaus Mikaelson. She was decapitated by Stefan Salvatore in the episode Our Town.

In Homecoming, Mindy was a peaceful werewolf who lived in Portland. Looking for more victims, Klaus arrived in Portland and sired many werewolves including Mindy and transformed them into hybrids. She and the rest of the hybrids came back in Mystic Falls together with Klaus.

She was first introduced to Tyler Lockwood at the Homecoming party while she was watching the concert. Klaus ordered his new army to protect him from any danger. He knew that Elena, Damon and especially Mikael would try to destroy him, so Mindy's mission was to supervise the party. If the enemies would have attacked, she had to announce Klaus immediately.

When Mikael arrived at the party, Mindy told Klaus he has a new visitor. Klaus told her to call everyone and go in the backyard. Klaus wanted the hybrids to rip Mikael. When the father and his despised boy were having a violent discussion, Mindy handed Katherine, who pretended to be Elena to Mikael. Then Klaus discovered that Mindy and the other hybrids were compelled by Mikael. Later, it is discovered that the hybrid's command was to kill Damon Salvatore, after a possible death of Klaus. Mindy's friends were also injured.

In The New Deal, Mindy was with Klaus. They where rebuilding The Original Family House. Klaus says to compel someone to open a wall so that there be sun there, and says he wants it to be a Fortress and not a dungeon.

In Our Town, Klaus ask Mindy to take Rebekah's coffin to her new room. When she comes back she asks Klaus if everything is okay, Klaus says that Stefan was just leaving. Stefan then killed Mindy by cutting her head off and says one gone, and then tells Klaus that he should make the rest of his hybrids leave Mystic Falls or he would kill more of them. Her body, together with her head, were burnt by the rest of the hybrids.

Mindy was quiet and didn't say too much, but she was a loyal follower, especially to Klaus. She did, however, take orders from Klaus and did what he asked her to do despite however wrong he may be.

Mindy was an attractive, young lady with medium length dark, brown hair, brown eyes and a slim build with a short stature.

Mindy possessed all the standard powers and abilities of a non-Original werewolf-vampire hybrid.

Mindy had the typical weaknesses of a non-Original werewolf-vampire hybrid. 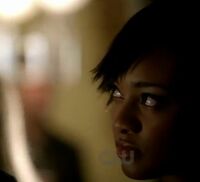 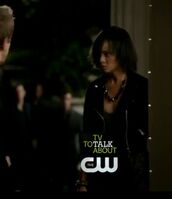 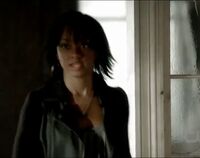 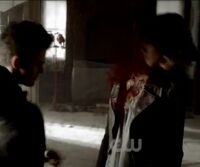 Retrieved from "https://vampirediaries.fandom.com/wiki/Mindy?oldid=2767333"
Community content is available under CC-BY-SA unless otherwise noted.