COSTUME PARTY OF THE DAMNED - On campus, Elena is touched by a sad and secretive student named Aaron. Elena and Damon attend the Whitmore Historical Ball dressed as Anne Boleyn and Henry VIII. At the Ball, Elena shares a dance with Dr. Maxfield, who has a disturbing message for her. Caroline's evening at the Ball takes her from happiness to heartbreak. Meanwhile, Nadia reveals her surprising history to Katherine, and Damon tries to make a deal with Silas. Silas demands that Damon commit an unthinkable act, which leads to a violent confrontation.

After Professor Wes Maxfield killed Jesse at the end of the last episode, this episode starts with him making experiments on Jesse for unknown reasons and it seems that this is not the first one.

Meanwhile, Elena tries to deal with Bonnie's death so she tries to distract herself by going back to her research about Megan's death and why Professor Maxfield covered the reason she died. While she thinks how to get the information she needs, she sees someone at Megan's grave. She approaches him and asks him his name and if he knew Megan, but the man doesn't seem very willing to answer her questions. It is later revealed that the man's guardian is professor Wes and his name is Aaron. Wes asks him to stay away from Elena and then, on an encounter with Elena at the Whitmore Historical Ball, he tells her to leave college and go back to Mystic Falls with her friends because there are people on Whitmore who are watching her.

Tyler came back for Bonnie's funeral and he now spends some time with Caroline who still tries to convince him to stop what he is doing and come to college. Tyler informs her that he can't let Klaus get away from what he did to his mom and that he'll haunt him down and kill him. Caroline tries to change his mind with no luck so Tyler leaves and they break up.

Nadia still has Katherine captured and Silas tries to find them but he can't do it without his mental power. Katherine keeps asking Nadia what she wants from her and Nadia reveals her that she is her daughter who left behind in 1492 and the only reason she became a vampire was to find her.

In the meantime, Damon tells Jeremy his plan about how they can bring Bonnie back to life. Since to bring someone back someone else has to die, he says that they should take advantage the fact that Silas wants to die to be with his true love, Amara, so that Bonnie comes back. They have to work with Silas though to do that and Bonnie doesn't agree with the idea, but Jeremy tells Damon that she's fine with it. Damon meets Silas to inform him about his plan and Silas agrees but he puts his own term; he wants Damon to "kill" his brother. By "killing" Stefan, the link between the two of them will be broken and Silas will have his mental power back. Damon just has to keep Stefan "dead" as long as Silas will be pretending to be Stefan so he can get the information he needs from Qetsiyah's head.

The plan goes well until the moment Stefan escapes from Damon before he "kills" him again and lets Qetsiyah know that she is talking to Silas and not him. Qetsiyah gets mad, reaches into his heart and twists it while she is making a spell causing it to stop. The spell turns Silas cold and grey and unable to move or do anything, but not dead. Damon and Elena find him and take him back to the Salvatore house.

Katherine arrives at Salvatore house after Damon called her and she is happy seeing that Silas is gone. The reason though Damon called her was to use her and bring Silas back so he feeds her to Silas. Silas starts waking up and while Katherine should be dead after this, she also wakes up with Elena and Damon not knowing why.

Damon: "Lady Anne Boleyn. Now who in their right mind would cut off a head so gorgeous?"
Elena: (curtsies) "You, my King. My not-so-loving husband."
Damon: "Well, maybe I can dance my way out of this dog house."
Elena: "Yeah, maybe... Maybe later."
Damon: "Or... Maybe you can tell me what's going on with you. Come on."
Elena: "Bonnie died three months ago and what was I doing? I was having the summer of my life... with you."
Damon: (tries to lighten the mood) "Guilt. Don't know it, but I've heard it can be a real bitch."
Elena: "I know that it's not my fault that Bonnie died, but it is my fault for not figuring it out sooner."
Damon: "Elena, you are allowed to be happy once in a blue moon. Besides, Jeremy has been lying to us all summer."
Elena: "I should have figured It out, Damon! I know that It's not the same, but I'm not 'gonna let Megan's death fall through the cracks too..."

Caroline: "Oh, before I forget. I talked to the register and your major is... drum roll... geosociology."
Tyler: "How about... we don't talk about the major right now."
Caroline: "And I compelled you a single."
Tyler: "Definitely don't wanna talk about my dorm room."
Caroline: "Or we could talk about the hybrid-sized jerk that you've been for not calling me back. Ever."
Tyler: "How many times do you want me to tell you. I've been helping a werewolf pack in the land of no cell phone reception."
Caroline: "Well, lucky for you, I figured out a way for you to make up for it."
Tyler: "I thought I did make up for it. A couple of dozen times."
Caroline: "You are escorting me to the Whitmore Historical Ball."
Tyler: "The what?"

Tyler: "Hey."
Caroline: "Hey."
Tyler: "Care..."
Caroline: "Wait. I've been thinking about it, and I've decided that...I'm not going to have this conversation again. I can't just sit here while I'm waiting for you to come back."
Tyler: "I don't want that either."
Caroline: "Then stay. Just be the love of my life, Just love me more than you hate him."
Tyler: "I'm sorry, Care. I can't do that."
Caroline: "NO. NO. NO! Don't you dare walk away from me. I swear to God, Tyler, if you take one more step, we are done, okay? No more surprises, no more excuses, no more chances. We are done."

Silas: "What makes you think that I need help?"
Damon: "Well, for starters, you're still here. As in, why do you suck so badly at killing yourself?"

Silas: "Of all the men here, Tessa went straight for Stefan. This face won her heart before. See, a woman never forgets her first love, no matter how badly it ended."

Katherine: "What kind of sick game are you playing?"
Nadia: "It's not a game, Katherine. You did kill my mother, but it wasn't in Paris. It was in a little cottage in England, and it wasn't 1645. It was April 6, 1492, and she was all alone, exiled by her family two years earlier. You stuck her head in a noose, pushed her off the chair, and snapped her neck."
Katherine: (stunned) "Who are you?"
Nadia: "My name... is Nadia Petrova... And you are my mother."

Silas: "You love me. You know you love me."
Tessa: "I did love you. And then you broke my heart, and now I'm gonna break yours. Or at least stop it from working, so your blood can't flow and your veins dry up and you rot from the inside out. Sp the world can see you exactly as you are-- a cold, gray, hideous monster." 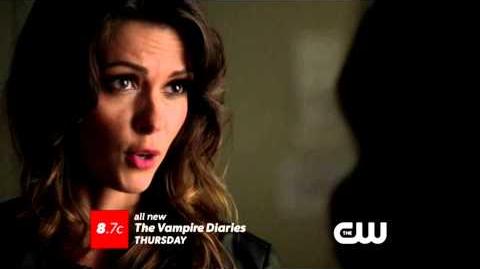 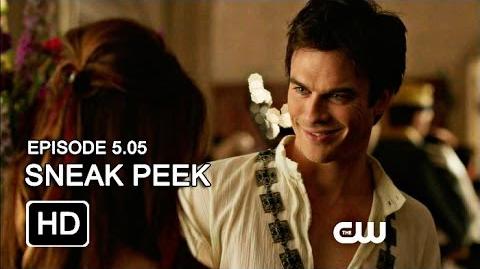 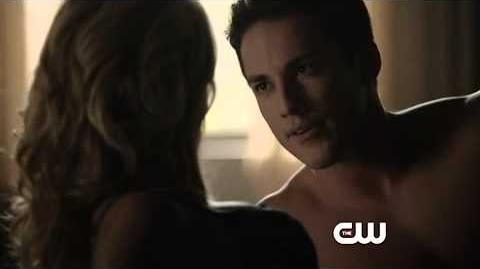 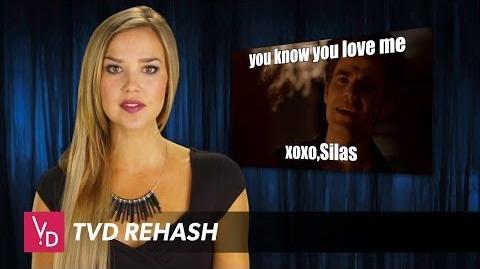 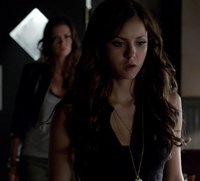 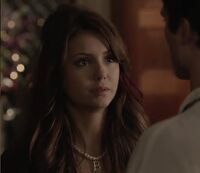 Retrieved from "https://vampirediaries.fandom.com/wiki/Monster%27s_Ball?oldid=2785299"
Community content is available under CC-BY-SA unless otherwise noted.