Murder House Party was an event in the Season Four episode, The Five at Whitmore College. It is a dress up party where attendees dress up as infamous murderers or their victims.

When Bonnie shows a "Murder House Frat Party" invitation to Damon and Elena, Damon sees it a s a perfect opportunity to teach Elena how to feed. Damon arrives at the party dressed up as Jack the Ripper and the girls dresses up as his victims. Bonnie goes to meet Professor Shane while Damon asks Elena to choose a person to feed. Elena immediately finds the boy she wants to eat. She lures him away easily and drinks deeply. Damon supervises, and begins to worry that she is drinking too much. She stops herself, and proudly hugs Damon. But she wants more.

Meanwhile, Bonnie and Shane talk about witchcraft and he says he can show her a few things. Back on the dance floor, Damon and Elena drink from anyone unlucky enough to dance with them. Elena and Damon then come together, both with bloody mouths, and dance together seductively, on a blood high. Elena catches sight of Bonnie and immediately feels guilty for enjoying herself.

Elena is outside and wiping blood off her mouth and tells Bonnie she should be here with Stefan. Damon steps outside in time to hear that last bit. Bonnie accuses him of wanting Elena to go over the edge. He argues that she needs to learn to revel in being a vampire. Not hating herself and enjoying it will be the only way she, like him, can make feeding fun and not go nuts and kill hundreds of people. Damon walks away hurt and Elena begins to cry as she realizes what she has done to him. 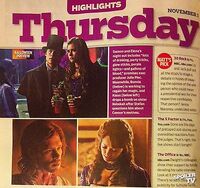 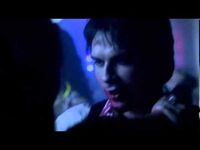 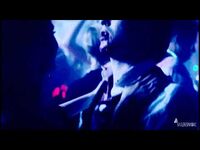 Retrieved from "https://vampirediaries.fandom.com/wiki/Murder_House_Party?oldid=2767051"
Community content is available under CC-BY-SA unless otherwise noted.