Mystic Falls is a picturesque town located in central Virginia with a then population of 6,923 people, currently unknown since after its closing and eventual restart. Aside from the town's foundation in 1860 by the Founding Families, the town also has a long history of vampires, witches and werewolves, causing Mystic Falls to be an uncanny village with a dark secret. Many famous historical occurrences have taken place in Mystic Falls.

Mystic Falls, which was once a hotbed of supernatural events, became one of the few places (if not the only one) in the world where non-traditional magic had no effect (although all magic, including Traditional Magic, was ineffective); therefore, the majority of supernatural species and magical artifacts had no effect in the town. As a consequence of the spell that the Travelers cast to undo non-traditional magic within the town borders, a vampire or a hybrid who entered Mystic Falls would have the magic that keeps them vampires slowly stripped away until they finally reverted to the stage in which they existed before being reawakened as a vampire—a dead body. They would then die the exact same way they died before reawakening in transition to become a vampire (e.g. drowning, snapped neck, a slit throat, etc.) and will stay dead due to the lack of magic reanimating their corpses.

The magical energy that empowered the Travelers' anti-magic barrier spell, was absorbed by Malachai Parker. As a result, magic can once again exist in Mystic Falls.

Over 1,000 years ago during the Viking era, the Mikaelson Family heard of a mystical land from which the inhabitants were blessed with the gift of speed and strength. Desperate to leave the place they currently lived due to the plague and death of a child, they moved to this land where they lived among the special people as equals. Until one day, when the family's youngest was killed as he snuck out to watch the beasts turn from human to werewolf. This prompted their mother to create a superior race. The remainder of the family fled the village not long after. The magical place was discovered some centuries later in 1860 by the Founding Families and named Mystic Falls.

In I Was Feeling Epic, Vicki Donovan returns to Mystic Falls for the first time since the collapse of the Other Side. Vicki planned to ring the Maxwell bell and reign hellfire upon Mystic Falls. Despite the attempts of both Damon and Matt to stop her, Matt eventually orders the evacuation of the town due to a "gas leak"; a regular occurrence in Mystic Falls. Vicki is successful in ringing the Maxwell bell and does bring hellfire, however, due to the efforts of Bonnie Bennett, Mystic Falls is not consumed by hellfire. However, the Clocktower is badly damaged, so too are the tunnels connecting Mystic Falls and the Armory.

Some of the known mayors are:

Some other institutions include:

The Founders Council is an association of the Founding Families, townspeople who are descended from the original settlers of Mystic Falls, as well as various municipal officials. Such as Alaric Saltzman. Outwardly, it appears to be a civic organization dedicated to celebrating local history. Secretly, the council's mission is to protect the town from supernatural beings, especially vampires. Journals written by members of the Founding Families describing vampires and how to catch and kill them are passed down through subsequent generations. 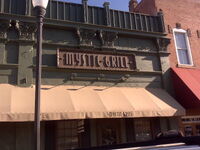 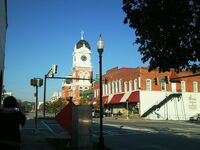 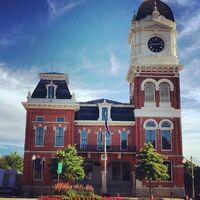