Mystic Falls Founders Bell, also known as The Maxwell Bell, was a supernatural church bell currently situated at the top of the Mystic Falls Clock Tower. It was originally enchanted by Bennett witches to kill Sirens although it was eventually corrupted to open a doorway to Hell thereby giving it the ability to summon Hellfire. It consists of the bell, the Maxwell Heirloom and the Staff of Arcadius. Together, the staff and heirloom are combined to form the bell's striker

When activated the bell glows red with heat until white.

The Bell was created by Ethan Maxwell in 1790 and spelled to be indestructible by the witches. This act would later warrant their deaths and be known as the massacre of a hundred witches.

The bell has been made by the Maxwell family, who were in charge of making church bells back when Mystic Falls was founded. Seline looked for the bell back in 1883.

Peter, a descendant of the Maxwell family, threw the bell in the lake under the Wickery Bridge in 1992, but it was retrieved by Elizabeth Forbes in 2009 when they pulled out Grayson and Miranda's car from the river. After her death, all of her belongings were boxed up by Matt. Not having the heart to go through her mother's stuff, Caroline placed the boxes in the garage.

Sometime after Seline was hired as the twin's nanny, she found the bell and took it for herself.

In We Have History Together, Sybil and Caroline Forbes went looking for the bell in the garage of her house, but Seline managed to take it before them.

In The Simple Intimacy of the Near Touch, Seline reveals that the bell can be assembled with the Striker (Maxwell Family Heirloom) and the Staff of Arcadius. Once together, Seline claims it holds terrible power, enough to kill her sister, Sybil. Later, she informs Dorian that only the Maxwell Family can use the bell's power and willingly hands it over to Matt.

In Nostalgia's a Bitch, Peter and Matt assemble the bell by welding the Staff of Arcadius and the Maxwell Striker together. Seline informs them that, to kill Sybil, a Maxwell must ring the bell 12 times. Later she elaborates to them and Stefan that the bell can kill sirens with hellfire (indirectly), as it rips open a hole in Cade's domain, his psychic imprint of his death (burned at the stake) and will kill everyone for miles. Later, Matt is compelled, yet with a free choice, to ring the bell 12 times if he can't forgive Damon for killing Vicki. He rings the bell 11 times before he is stopped.

In What Are You?,

In We're Planning a June Wedding, Vicki Donovan is revealed to have escaped Hell and proceeds to ring the bell.

In I Was Feeling Epic, Vicki rings the bell 12 times, ordered by Katherine Pierce so that she could destroy Mystic Falls, kill Elena and getting her revenge against the Mystic Falls Gang, when Vicki was about to ring the bell the last time, Bonnie sent the hellfire to The Armory where she sent it back to hell, killing Katherine and Stefan in the process.

Since the the bell has been welded together with the Staff of Arcadius (and the Striker), the Staff's effects are amplified greatly. So much so that it can weaken and drop the psychic boundaries of Hell. Due to this, should the bell be rung 11 times, the bell could open a portal to hell. In doing so, spirits could escape the tortures of hellfire, although they would still be tethered to Hell and could only return permanently if allowed by Arcadius. Should the bell be rung 12 times, specifically by a Maxwell, the walls of hell will be breached and hellfire itself will be released. Since the destruction of hell, the bell is no longer capable of releasing the hellfire, nor spirits, as the dimension of hell was destroyed.

Sketches of the bell in the Maxwell Journal 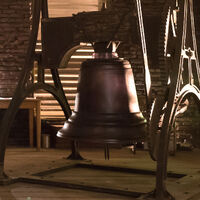 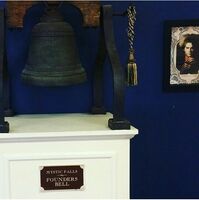 Retrieved from "https://vampirediaries.fandom.com/wiki/Mystic_Falls_Founders_Bell?oldid=2767355"
Community content is available under CC-BY-SA unless otherwise noted.