Unlike most high schools, due to its location in Mystic Falls, MFHS is a common battleground for supernatural wars. Sometimes the school and its students are referred to as Timberwolves. The principal was Alaric Saltzman.

The Mystic Falls High School football team, also known as "The Timberwolves", were first shown in Season One. Elena convinced Stefan to join after personally witnessing his speed and strength. Prior to his death, Coach Tanner was the team's coach. When Tyler Lockwood first became a hybrid, Coach Lyman was running team practice, but Tyler compelled him so that he and the team could go to the bonfire. After this, they weren't seen again.

Their uniform, much like the Mystic Falls High School cheerleading squad, is a dark shade of red. The jersey has a V-neck black and white striped collar and a white number printed on the front.

Ben McKittrick led the team to a state championship.

The only currently known cheerleader is Maya; previous students include Caroline, Bonnie, Elena, Rebekah, Tiki, and Dana. All but Dana, who is deceased, have graduated.

The school's flag football team participates in an annual game against Salvatore Boarding School for the Young & Gifted. Every year, their team always wins due to the Stallions intentionally playing poorly so as not to arouse suspicion, or even attention, to their supernatural abilities.[6]

Most of the history class students

Elena and Stefan kissing at the Student Lounge in 1x16

Stefan, Elena, and Caroline talking in front of the lockers in 1x16 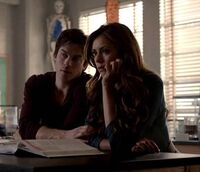 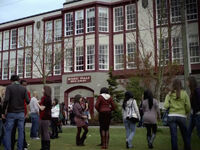 Tyler Vicki and Jeremy at the Stoner Pit in the Pilot