The Vampire Diaries Wiki
Register
Don't have an account?
Sign In
Advertisement
in: Cities, Locations, Locations outside of Mystic Falls

New York City is the most populous city in the United States of America and the center of the New York Metropolitan Area, one of the most populous urban agglomerations in the world. It was once the temporary home of Damon Salvatore in the late 1970´s, where he enjoyed a bohemian and hedonistic lifestyle in the city.

During the mid-late 1970s, Damon Salvatore lived a wild life in New York, where he was active in the bar scene that was becoming all the rage as the punk trend gained popularity. Since his humanity had been turned off since his escape from Augustine's captivity in 1958, he had been viciously feeding on and killing so many people that he eventually became known as the well-known serial killer "the Son of Sam." Damon made friends with a vampire named Will, who ran a bar called Billy's, out of which he also ran a side-business for vampires in need of new identities. Because of this secret business, Will made a deal with Damon—Damon could feed on the human patrons of his bar, so long as he chose victims whose physical appearances matched his vampire clients and stole their IDs afterward so their identities could be given to said clients.

In 1977, Lexi Branson and Damon crossed paths at this very bar and Lexi revealed that she was sent by a worried Stefan to help him after the two had learned of Damon's killing spree all the way back in Mystic Falls. Lexi intended to help Damon turn his humanity back on, just as she had helped Stefan do the same multiple times over the centuries, and though Damon refused her help, she persisted and remained by Damon's side for the next six months. The two eventually fell into a routine where they would spend the evenings partying at the bar, getting drunk on Will's alcohol and feeding on the human patrons together, and then late at night, Lexi would take advantage of his drunkness to try to stir up feelings in Damon by making him reminisce about his past.

One night at Billy's, when Lexi was getting Damon to talk about his former flame Katherine Pierce, he tricked her into thinking that his humanity switch had been flipped because he had feelings for her, which led the two to have a night of wild sex throughout the bar. The two ended up on the roof, where they had fallen asleep, and the next morning, Lexi awakened at sunrise when the sun began to burn her skin, since she didn't have a daylight ring. However, when she fled for the exit to return inside, she found that the door had been locked and reinforced by Damon while she was sleeping, forcing her to press herself against the door in order to stand in the tiny sliver of shadow that it cast across the roof. Damon then began to taunt her, revealing that he had planned this "joke" to get back at Lexi for trying so hard to turn his humanity back on when he had no interest in doing so and stating he had lied about having feelings for her. He then abandoned her on the roof, leaving her trapped in the small patch of shadow until nightfall when she was finally safe to leave, and afterward, Damon was confident that Lexi now hated him enough to not follow him any longer.

In Bring It On, Damon and Rebekah Mikaelson, who were looking for Katherine in order to steal the cure back from her, ran into Will (who was dying of a hybrid bite from Klaus Mikaelson) just outside Mystic Falls, causing Damon to realize that he had been providing Katherine's many identities after all of these years and k. When he returned home to find that his girlfriend Elena, who had recently turned off her own humanity after the death of her brother Jeremy, had nearly killed her best friend Caroline and had alienated Stefan, he decided to take her to New York with him, as he thought getting her out of town would be the best course of action and figured he could also pursue his hunt for the cure while he was there.

Damon and Elena arrived in New York City in Because the Night, not knowing that Rebekah had followed them, as she wanted the cure and believed that Damon was trying to search for it without her so he could give it to Elena instead. Knowing that Elena didn't want the cure, Damon denied that he was looking for it so as to not scare her away, but Elena knew he was lying, though she played along for a while. The three started to get drunk and feed on some of the bar patrons, just as Damon did when he was living there with Lexi, but while Elena and Rebekah were feeding on a girl together, Damon sneaked away to search Will's records for Katherine's current address. While he was gone, Elena informed Rebekah that she was well aware of what Damon was doing, but that she had no interest in taking the cure despite how much everyone wanted her to do so. Rebekah suggested that they team up, believing that by doing so they could both get what they wanted, since she wanted the cure for herself, and if she took it, Elena wouldn't have to worry about it being used on her. However, Elena rejected this offer, claiming that Rebekah's emotional nature and insecurities—issues that Elena didn't have without her humanity—made her a liability in her plan.

Elena eventually seduced Damon on the roof to try to get Katherine's address for him, but just as Damon was about to neutralize her to keep from interfering with his plans, Rebekah appeared and snapped his neck, saving Elena and convincing her that the two of them teaming would be a good idea. Elena and Rebekah then stole Katherine's address from Damon's pocket, as well as his Camaro, which they drove toward Pennsylvania until it ran out of gas so they could abandon it for another stolen car so they would be harder to track.

In Because, Damon and Elena played a game where they discussed where they would want to be in five years if they were human, a game which Damon started as a way to gauge whether or not Elena would be interested in taking the second cure Bonnie had brought back from the 1994 Prison World. Elena admitted that she would live to be living in an apartment the TriBeCa neighborhood of NYC located on top of the bar that Damon would hypothetically be running in this scenario.

In Day One of Twenty-Two Thousand, Give or Take during a flash-forward to 2016, a wounded Stefan arrived to a storage locker in in the Brooklyn neighborhood of New York City, where Elena and Damon (the former due to the magical coma caused by Kai, the latter due to desiccating himself to pass the time before she awoke more quickly) were being stored in coffins. Stefan fed Damon a blood bag, despite Damon's earlier orders not to do so until Elena was awake, and insisted that he needed him. Just then, a mysterious woman armed with vampire-killing weapons arrived and began to shoot at them, forcing them to take cover behind Elena's coffin. When Damon remarked that "she" had returned, Stefan explained that he already knew, and showed him a scar on his chest in the shape of a cross, which he said had opened and began bleeding that morning, alerting him to the fact that "she" was near. Damon then explained that they needed to run, because she wouldn't stop until Stefan is dead.

In The Feast of All Sinners, Rebekah moves to New York City with Marcel following her after they can no longer live in New Orleans.

In Where You Left Your Heart, Rebekah and Marcel are still living in the city when he asks her to marry him at city hall unable to do it without her family she declines the offer.

In Ne Me Quitte Pas, after Elijah loses his memories he finds himself in New York living there for a while and plays the piano in Central Park. However Marcel finds him and tells him to leave town soon since Elijah cannot be there when Rebekah comes back. 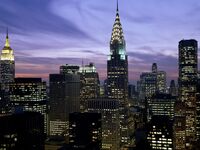 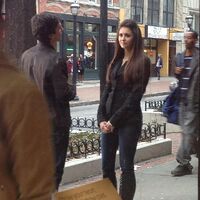 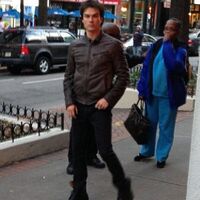 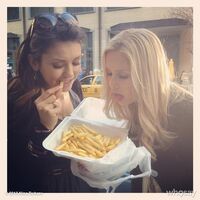