Nikolina Konstantinova Dobreva (Bulgarian: Николина Константинова Добрева, born January 9, 1989) is a Bulgarian-Canadian actress who plays Elena Gilbert, Katherine Pierce and Amara on The Vampire Diaries and Tatia on The Originals. She is perhaps best known for her role as Mia Jones in Degrassi: The Next Generation. Dobrev has also been featured in movies.

Nina Dobrev was born on January 9, 1989 in Sofia, Bulgaria as Nikolina Konstantinova Dobreva (Bulgarian: Николина Константинова Добрева). Her father Konstantin is a computer specialist and her mother Michaela is an artist. She has an older brother, Alexander. Her cousin, Jeny Nikolova, is a model in Canada. Nina moved to Canada at the age of two and has lived in Toronto, Ontario until 2009.

From a very young age she showed great enthusiasm and talent for the arts of dance, gymnastics, theater, music, visual arts, and acting. Modeling jobs led to commercials, which then turned into film auditions. Shortly after, she had roles in the feature films Fugitive Pieces and Away From Her as well as the popular television series Degrassi: The Next Generation on CTV.

Nina loves to travel and has often visited Europe both for pleasure, as well as competing internationally representing Canada in Aesthetic gymnastics. She enjoys playing volleyball, soccer, swimming, rock climbing, wake boarding, snowboarding, and horse back riding. But above all acting is her passion, and she sees it as an adventure that has just begun; she believes that the journey and the characters we create along the way will help us understand ourselves. 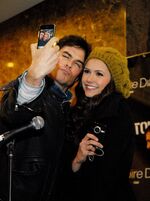 Nina dated her co-star Ian Somerhalder, who portrays Damon Salvatore, for three years. The two officially broke up in May 2013. Despite their breakup, the two remain friends. A few months later, Nina became romantically linked to Dancing With The Stars dancer Derek Hough. The two have been spotted holding hands and sharing various romantic tweets towards each other.[5] Around October 2013 it was reported that Nina and Derek had broken up. In a May 2014 InStyle Magazine interview, Nina says that she's a bit of a Tom Boy and loves to skinny dip. Nina also admits to carrying a bikini with her, no matter where she goes so that if the urge strikes to go for a swim.