THE RACE TO SAVE CAMI — Following a violent encounter that has left Cami's life hanging in the balance, Klaus is forced to rely on his family and allies to find a cure as he keeps a watchful eye over Cami at the compound. With time running out, Freya turns to her arsenal of spells, while Vincent and Marcel head to Cami's apartment to gather a crucial ingredient. Elsewhere, Hayley and Elijah travel to the Bayou in hopes of bringing back a potential antidote that could save Cami's life. Finally, Davina confronts Lucien and learns some heartbreaking information that will change her future with Kol forever.

Camille wakes up the next morning, sees the bite mark on her arm, and painfully realizes she's going to die. Lucien is, of course, nonchalant about the whole thing and tells Camille her days were numbered the day she caught Klaus' interest. She looks through her belongings for a weapon and finds the Devil's Star, throws it at him, and gets away.

At the compound, she pleads with Klaus not to be angry or fly off the handle. He smells her blood and pulls up her sleeve. Camille tells him she loves him, and faints. Klaus carries her inside, telling her he'll say "I love you" tomorrow.

She wakes up. Hayley sits with her. Klaus person a healing salve made from motherwort and white willow bark; Freya says it's a thousand-year old recipe that will ease the pain and dull the symptoms, but it won't take away the infection. Elijah and Vincent arrive; Klaus bets Lucien's blood can cure her, and since there's blood in Camille's apartment from when she sliced him, Vincent goes to retrieve the blood because Lucien wouldn't be on the lookout for him. Hayley joins in, saying that perhaps Hope's blood might help.

Davina shows up at St. James Infirmary, upset that Kol didn't say goodbye or tell him that he got back. Kol tells her he starts to desiccate if he leaves New Orleans, and it isn't safe to be around him. Davina is sure there's a way to undo the curse. Marcel calls Davina on the phone, telling her what happened with Camille.

Klaus regrets not killing Aurora, but Camille is now not so hung up on revenge. She's angry at what Aurora did to her, but that anger is not her—Camille used to help people like Aurora, and she won't let Aurora take that away from her.

Camille asks Klaus to write her will. He owes her that, since she was his stenographer. To Davina, she'll give everything in her closet, just nothing too revealing. To Josh, her records. To Vincent, her books and all of Kieran's files. To Elijah, an old game of Trivial Pursuit. To Hayley, and eventually Hope, her dark objects. When she gets to Klaus, he can't take it anymore.

Vincent uses magic to lift Lucien's blood off the floor and into a bowl. He nearly doesn't make it because The Ancestors don't want him using magic.

Davina meets Lucien, putting up a barrier spell and knocking out everyone in the bar with her magic. She wants Lucien to tell her how to help Camille. At first, he just tells her trivial facts about himself. He finds her persistence annoying, and walks across the barrier, telling her he can do so because the Ancestors are on his side. He also reveals the Ancestors have a plan to shut her up for good. She continues to ask about helping Camille, just when Vincent arrives with Lucien's blood at the compound, and he says there's no loophole or cure to his bite. He allows her to leave, as she isn't his to kill; the Ancestors have something else in store for her, something Kol knows about.

Klaus and Camille spend the rest of the day in her mind, walking around a version of New Orleans from her memory and being happy. The conversations turn emotional as they start talking about her imminent death.

Davina confronts Kol about the Ancestors. They put the curse on him to kill Davina, but he's been fighting it. Kol tells her there's another way—daggering him. The first thing he did when he came back to life was track the White Oak ash and dagger to make sure Klaus wouldn't stick it in him the second Kol started to annoy Klaus. He always hated it when Klaus daggered him, but now it's the only option.

Camille is still not healed. Freya suggests putting her into another body, but Elijah says Camille would never want that. They shouldn't deny her the dignity of choice, and she should have the dignity to die as she would want.

Klaus conjures up the night they met. He tells her he loves her, and Camille knows she doesn't have tomorrow to live. She is dying, and she finds she can't go without being scared. Klaus reassures her that she didn't fail, either with him or in life. As her body begins to desiccate, Camille tells him to end the cycle of abuse Mikael inflicted on him, to be the light in Hope's life.

Vincent, Freya, and Hayley say their final words to Camille (the way everyone did to Katherine when she died, and the way the Mikaelsons did for Finn before scattering his ashes).

Freya and Vincent are determined to unmake Lucien, as it was her blood and his magic that made him what he is now. An earthquake shakes the city. It stops, just as Kol appears behind Davina and feeds on her. When he is finished, he realizes what he's done and tries to heal her, but to no avail.

Lucien: "But to be honest, your days were numbered the moment you caught Nik's eye."

Klaus: "I can tell you I love you tomorrow. You're not dying today."

Lucien: "All the makings of a lovely day."

Lucien: "But to be honest, your days were numbered the moment you caught Nik's eye."

Cami: "I just needed you to know."
Klaus: "I can tell you I love you tomorrow. You're not dying today."

Lucien: "All the makings of a lovely day."

Lucien: "Ah. Camille! Finally awake! Perfect! You've got a big day ahead of you."
Cami: "You bit me."
Lucien: "I took quite a bit of your blood actually. It was very tasty, although more bitter than I expected."

Cami: "Oh my god. I'm gonna die!"
Lucien: "Yeah... apologies. But to be honest, your days were numbered the moment you caught Nik's eye."

Klaus: "You're not dying today."

Hayley: "Hope is a Mikaelson witch who carries the wolf gene. We already know that she has healing powers."
Freya: "It's worth to try."

Kol: "Lucien is an unstoppable monster made by the Ancestors."
Davina: "I have stood up to Klaus. I'm not afraid of some second string copycat."

"There Is Something On Your Mind" – Zydeco All-Stars

The Originals No More Heartbreaks Trailer The CW

The Originals No More Heartbreaks Scene The CW

The Originals Inside No More Heartbreaks The CW 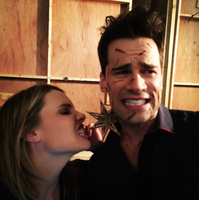 Retrieved from "https://vampirediaries.fandom.com/wiki/No_More_Heartbreaks?oldid=2785459"
Community content is available under CC-BY-SA unless otherwise noted.