Alphonz Bellatunde Delgallo, better known as Papa Tunde, was a dark witch and a former leader of the French Quarter Coven in early 20th century New Orleans. He was resurrected in 2011 by Céleste Dubois, who was possessing Sabine Laurent, along with Bastianna Natale and Genevieve, using the energy from the Harvest ritual. He was resurrected due to his intention to seek revenge on Klaus for killing him and his twin sons in 1919. To complete this mission, he willingly sacrificed himself in a ritual performed by Céleste that would turn his blade into a dark object with the ability to cause devastating pain to even someone as powerful as an Original vampire.

In 1919, Tunde and his twin sons came to New Orleans at Marcel Gerard's behest after the vampire had met him while he was deployed to France in World War I. Papa Tunde first appeared in a ceremony performed by the witches of the French Quarter Coven, where he revealed that he, too, practiced Ancestral Magic. However, he then admitted that he practiced an additional form of magic as well-- Sacrificial Magic, which involved him using the power of his offerings (typically supernatural beings) in order to vanquish his enemies. After explaining his history, he then offered a deal to the coven: if they welcomed himself and his sons into their coven and accepted him as their leader, he would use his substantial sacrificial power to defend them against the werewolves, vampires, and corrupt human politicians.

Days later, Tunde and his twin sons crashed a meeting between the brothers Elijah and Niklaus Mikaelson and the Guerrera werewolf crime family. The Mikaelsons and Guerreras were in the middle of discussing how they could best smuggle alcohol into the city in the face of Prohibition becoming the law of the country when Papa Tunde interrupted them by informing them that as a fellow king of the city, he deserved to be at the meeting with them. He gave them the head of Mayor O'Connell, who was meant to be joining them in the meeting, as a warning before stating that he would be in touch and leaving with his sons in tow.

After giving his warning, Tunde began his campaign to gain more power in the Quarter and he sacrificed the weaker vampires, werewolves, witches, and humans who opposed him to fuel his sacrificial magic, making him a force to be reckoned with in the supernatural community of New Orleans. Even still, Klaus was convinced that he was a charlatan and spent some time studying Tunde and his methods to best craft a plan against him. Though Elijah attempted to arrange a meeting to discuss a diplomatic resolution to their problems, it was ultimately Klaus who showed up at the scheduled time, where he revealed that he had learned the secret to Tunde's power — he used his sacrificial sigil to channel the power of his twin sons to boost his strength. Echoing Tunde's earlier warning that involved him giving the brothers Mayor O'Connell's severed head as a gift, Klaus gave Tunde the severed heads of his twins as proof that he had lost the bulk of his magical power. Klaus then took advantage of Tunde's physical, magical, and emotional weakness due to the loss of his sons and gouged his eyes out with his thumbs, killing him instantly and ending his reign of power in the city.

In Après Moi, Le Déluge, Papa Tunde was resurrected by The Harvest ritual with help from Céleste Dubois. He went from the cemetery, picked up his hat and met with Genevieve, Bastianna and Sabine who revealed that she has been possessed by Céleste for almost a year.

In Dance Back from the Grave, Tunde begins his renewed campaign of witch supremacy by killing a couple of daywalkers. Leaving a sacrificial ritual mark where Thierry could find it, Tunde then waited for him to summon Rebekah. Attacking them both, Tunde revealed his magical power by desiccating Rebekah with a mere touch. As Thierry ran off, Tunde performed his ritual, drawing all of Rebekah's power into him, and leaving her trapped in a desiccated state. He then attacked Marcel at Rousseau's. After a short fight, he desiccated Marcel and prepared to drain, and kill him, when Klaus showed up. However, with the strength of Rebekah, and all of the day and nightwalkers he killed, Tunde proved to be more powerful than Klaus, and had the upper hand in the fight, until Elijah and Hayley freed Rebekah, severing his link to her power. Tunde then ran while Klaus saw to Marcel, and went to the Garden to kill every single occupant. Finally, channeling all of the power he acquired into his bone blade, Tunde, for the glory of the French Quarter Coven, allowed Céleste to kill him, to increase the power further.  Marcel revealed in a conversation with Camille that Tunde slaughtered many werewolves and witches including the Guerrera werewolves during his first visit to New Orleans.

Papa Tunde was a witch with immense confidence in his own ability. He approached the French Quarters in spite of being aware of the natural forces running it, which includes the Original Vampires. When Klaus killed his source of power, Tunde's two sons, rather than becoming afraid before the Original Hybrid, he opted to attack him then and there.

He was a man that was of tall stature and always wore dress up shirts (tuxedos, etc.) that were either black or white. He was also rarely seen without a fedora as well.

Papa Tunde was a very powerful and formidable witch who not only practiced Ancestral Magic, that was not local to New Orleans, but also proved to be especially skilled in Sacrificial Magic.

He was referred to as "Great" by Genevieve who was a powerful witch of the French quarter in her own right, which somewhat was in reference to his power or history among the witches of New Orleans, and was easily accepted by the French Quarter Coven as their leader who would lead them to victory against their enemies; the Vampires. He was also referred to as a "very dangerous witch" by an Original Vampire, which also testified to his power, and seemed to strike fear in the hearts of the Mikaelsons and other Vampires, something that very few witches could do. He also seemed to single-handedly go up against the Humans, Werewolves and Witches of New Orleans who opposed him, and Marcel recalled his rampage in a flashback and even stated that "No one was safe" which furthermore described how formidable he was as a witch.

He showed great skill in channeling both supernatural beings, thus replicating their unique abilities e.g. when he channeled his sons' powers as well as when he channeled Rebekah and was able to channel the abilities of an Original Vampire through her such as super strength, speed, and durability, and also Humans. This is perhaps the most proficiently performed channeling as no other witch, other than Dahlia with her connective magic, has been seen to do this. While channeling he was unbeatable, though he was calculative in which sacrifices he chose first, i.e. attacking and amassing power from normal vampires, then adding Rebekah's power to his own, which he was able to accomplish with a single chant. At that point he could even best Klaus the Original hybrid, up until his sacrifice was desecrated. In order to protect the sacrifice he was channeling, in regards to an original vampire, he also utilized powerful, and equally complex, sacrificial sigils with his boundary spells

His greatest weapon seemed to be his blade, which was said to incapacitate its victims by digging deep into their hearts and leaving them in a perpetual state of unimaginable pain until uprooted from said victim's chest, and not even an Original was immune to its power. With the creation of this weapon, it was nearly as feared by the Mikaelsons as the White Oak Stake. In the end, Papa Tunde transferred all the dark power he harvested from the vampires he killed and channeled it into his blade, stating that the blade could do things worst than death, even to an original. He, himself, became the final offering to his bone blade, giving Céleste a weapon she could use to fulfill her revenge. 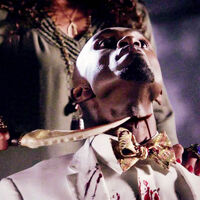 Retrieved from "https://vampirediaries.fandom.com/wiki/Papa_Tunde?oldid=2767409"
Community content is available under CC-BY-SA unless otherwise noted.