Party at the Grill

The Party at the Grill was an event on November 1, 2009. Damon compelled Caroline to throw the party. It was also the day of Stefan's 162nd birthday, which he spent at this event. Earlier that day Lexi came to visit Stefan like she did every birthday he had. The party was held in the Mystic Grill at night.

Stefan played pool with Lexi and was having a great time, even seen smiling. Elena talked to Lexi and she told her that the love of her life was a human.

Caroline tried to get the crystal from Bonnie, but failed because it shocked her. Later Caroline was seen drunk in the middle of the party and Matt carried her home. At the end of the night, Damon attacked a young girl and then compelled her to tell Sheriff Forbes that it was Lexi who attacked her. Then Sheriff Forbes and two other cops injected Lexi with vervain, and arrested her.

They took her to a back alley with the intent of staking her, however Lexi was strong enough to resist the vervain and was about to attack Sheriff Forbes, until Damon "saved" the sheriff by staking Lexi in the heart. Damon's plan worked as Sheriff Forbes then responded, "Finally this nightmare is over." 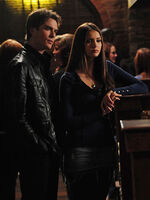 Retrieved from "https://vampirediaries.fandom.com/wiki/Party_at_the_Grill?oldid=2767412"
Community content is available under CC-BY-SA unless otherwise noted.