Pastor Young was a character who appeared in the first episode of the fourth season of The Vampire Diaries. He was a dangerous vampire hunter who had a personal hatred for vampires and threatened Meredith to expose her use of vampire blood on patients. He also captured Stefan, intending to use him as a bait to capture Damon as well.

However, most of his bad actions (in Growing Pains) are because Shane manipulated him using the grief for his deceased wife. So these final actions aren't truly his actions, but are really Shane's, so as to complete the Expression Triangle.

In Growing Pains, Pastor Young was appointed as the leader of the Town Council's effort to eradicate vampires in Mystic Falls after Alaric Saltzman's revelation about their continued presence in town. He began by neutralizing the treacherous members of the council. Meredith Fell's medical license was suspended and the hospital blood bank was secured by the Sheriff's deputies; Mayor Carol Lockwood was relieved off-duty, arrested and questioned about her son Tyler's whereabouts and Elizabeth Forbes was suspended from her job as sheriff. The pastor also made sure that all the vervain in Mystic Falls was taken, even the stash in the Salvatore house.

Pastor Young then activated the Council's contingency plan to suppress the vampires. To this end, he had his deputies capture Caroline Forbes before she could escape from Mystic Falls, Stefan Salvatore and even Rebekah Mikaelson, one of the Original vampires by temporarily incapacitating her with a stake to the heart. He personally led Stefan's capture and also took his girlfriend Elena Gilbert with him. His deputies failed to capture Damon Salvatore and the indestructible White Oak stake during the attack in Rebekah's house.

He locked them up in his farm where they were kept in the barn with vervain to keep them weak. The plan was to use Stefan to lure Damon into a trap and to use Rebekah to lure her siblings back to town. Elena would give them the stake and therefore allow them to destroy the vampires once and for all. The pastor failed to realize that Elena was transitioning to becoming a vampire, but when he did she was imprisoned with the others. Damon and Matt Donovan then came to save their friends. Damon attacked Matt to attract the pastor's attention. Young told Damon to give him Matt, to which Damon agreed to in exchange for his brother and Elena but the pastor responds by having a deputy shoot him. However, Damon was faking his unconsciousness and kills the remaining deputies before releasing all the prisoners and leaving.

After the failure of the Council's plan, Pastor Young invites all the "loyal" members of the Council to his farm to discuss his retaliation against the vampires. However, the pastor had ulterior motives for the meeting. Releasing a gas line, he then locks them all in the kitchen and, using a lighter, blows up the farmhouse, killing the entire Council.

In Memorial, a mysterious new hunter named Connor Jordan arrives in town and starts to investigate the Council fire. In the stove of the farm, he finds a letter written by the pastor to his daughter, April Young, talking about a greater evil and a war to come.

In We All Go a Little Mad Sometimes, Matt Donovan discovers that the pastor had been in close contact with Professor Atticus Shane, an Occult Studies teacher, at Whitmore College who was aware of the events occurring in Mystic Falls. They spoke almost every day and the day the pastor blew the Council up, they spoke ten times.

In O Come, All Ye Faithful, Shane reveals that his connection to the pastor was due to the latter's depression over his wife's death due to cancer but that he never knew that he was planning on destroying the council. This was later revealed to be a lie. The death of the council members was the first massacre necessary to create the Expression Triangle.

Like many of the other dangerous hunters that have been featured in The Vampire Diaries, Pastor Young has a cold, calculated and somewhat sinister personality. He justifies his actions by saying they will assure the safety of the human population of Mystic Falls, but when humans are tied to vampires or vampire activity (friend, lover, family, etc.), he does not consider the links and sees them as traitors.

Pastor Young was a middle-aged man with light brown hair and blue eyes. He had a tall stature and medium build, wearing a clergyman's regular attire. 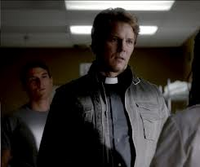 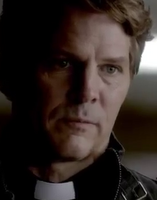 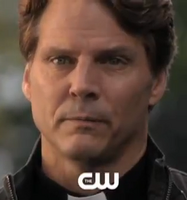 Retrieved from "https://vampirediaries.fandom.com/wiki/Pastor_Young?oldid=2780898"
Community content is available under CC-BY-SA unless otherwise noted.