Peter Maxwell is a recurring character who first appeared in the fourth episode in the eighth season of The Vampire Diaries. He is the long-lost father of Matt Donovan and Vicki Donovan, who recently resurfaced and was dragged into the supernatural world. He assisted Alaric Saltzman and Dorian Williams at the Armory, which was later destroyed.

Peter is the long-lost father of Matt and Vicki, and the ex-boyfriend of Kelly Donovan. He left them when Vicki was young, and while Kelly was pregnant with Matt. He states that because he couldn't be a toilet scrubber anymore. He felt ashamed and had to get out. He mentions that he regrets leaving his mother the most, especially at the time when she needed him the most.

He also gambled away a lot of money and even cheated on his taxes, but managed to reform his life.

In An Eternity of Misery, he is first introduced at a car shop where his employee, Lou, was just killed by Damon. Damon "compels" him and questions him about Sybil, but Peter swears he has never met her. Damon tells him that he is looking for a Maxwell family heirloom and sends Peter about the shop looking for it. Peter brings all sorts of objects to try and see if it's what Damon wants.

Peter mentions that his grandmother left him a box of stuff that his son might have. Damon tells him to call his son.

Damon notices Peter's watch and has Peter toss it to him. It burns Damon as the leather was likely steeped in vervain. Damon questions him about it, and Peter remarks that he has no idea what Damon is talking about and that his son gave him the watch.

Damon stabs Peter and is about to leave, but Damon is shot from behind by Matt Donovan, who is revealed to be Peter's son. Matt feeds Peter Damon's blood and promises him some answers. Matt apologizes for not telling him things months ago.

Matt and Peter head to the place where Damon said Tyler could be found. Peter goes over all the supernatural information that Matt has just schooled him in. Matt tells him about vervain and Peter's watch being the reason Damon couldn't compel him. Peter says "A glass of vervain everyday keeps the vampires at bay". Peter tells Matt that his great-grandmother used to say that while making tea. He says that he doesn't expect Matt to forgive him, he had his reasons, but they don't seem right now. Matt states that he understands and that they all should have gotten out of the town when they could.

Peter is seen again when Matt finds Tyler's body, and he consoles his son.

In Coming Home Was a Mistake, Peter and Matt are boxing things up at the Lockwood mansion. Peter brings Matt a package from the Armory. Peter encourages Matt to take his time packing but Matt would rather get it over with. Matt tells Peter that he's an expert at dealing with loss because it started at such a young age. This comment obviously hurts Peter, but he thinks he deserves it.

Peter wants to know how all of the things in Mystic Falls happened. Matt tells him he had to deal with vampires, vervain and death all alone, with no escape so he didn't feel like giving Peter a history lesson.

Peter finds Matt going through the package from the Armory. It was from Tyler to be delivered to Matt upon his death. All of it's contents are spread out on a table so Peter asks about it. Matt tells Peter that Tyler was helping a girl named Virginia St. John locate some sirens that had escaped the vault. Virginia's great-grandfather had released one of them in 1883. Then Virginia died, leaving everything to Tyler, who died and left everything for Matt. Matt tells Peter that he wants to stay out of it but Peter encourages his son by telling him that he is brave and fearless.

In The Next Time I Hurt Somebody, It Could Be You, Matt and Peter show up for Christmas dinner at the Salvatore's, surprising Caroline. Peter had convinced Matt to stick around the people he loves. Sybil and Damon are clearly up to no good as Sybil looks at Peter and says to him "We've been waiting for you."

Caroline hands presents out to everyone, including Peter. Damon announces that after dinner he is going to kill the most evil person in the room and give them a trip straight to hell. Peter looks a little worried.

As they sit around the dining table, Damon describes his job to everyone. Peter speaks up and comments on how Damon murders innocent people. Sybil asks about Peter and says that she has heard so much about him.

Peter starts confessing to everyone at the table that he gambled away a lot of money and cheated on his taxes. Peter still can't figure out what else Damon wants to know. Damon reminds him that he abandoned his kid and demands to know what else he's been doing for the past twenty-plus years. Damon attacks Peter and holds a knife to his throat, demanding answers. Damon cuts him on the cheek, saying the next one will be lower. Peter finally yells that he was ashamed. Kelly had just told him she was pregnant again and he just couldn't come back to this town; he had to get out. Damon comments on how Peter didn't have a reason for abandoning his kids at all and thus declared Peter the winner of his game.

Sybil takes Peter to the kitchen and apologizes for the cut on his face. She tells him she came to get something from him but Peter has no idea what she's talking about. She puts her hands on either side of his head causing Peter to scream.

In We Have History Together, Peter talks with Matt and Dorian. He tells them that the Maxwell family used to have a business making church bells. Peter confirms that the Maxwells had an estate, Peter then tells Matt most of it was sold to the town of Mystic Falls, so their family can pay off some debt.

Peter and Matt talk while driving. Peter explains why he threw the Maxwell bell over the Wickery Bridge. He tells Matt he did it because it was a payback to the people who took over Mystic Falls. As they continue to drive Matt gets a text from the Sheriffs department saying the students who were kidnapped by Sybil need to be saved. Peter tells Matt this and tells him to drive faster.

Sometime later at the clock tower Peter meets Seline and Stefan. He has no idea what's going on. Seline talks about Cade and the Maxwell bell and what they are capable of. Sometime later Stefan tells Matt he will be the one to ring the bell whether he likes it or not. Peter tells Stefan to stay away from Matt. Stefan pushes Peter away so he can compel Matt.

Peter asks Matt if there's any way for Matt to forgive Damon. Peter and Matt talk Matt begs Peter to leave. Peter tells him it's his fault that they are in this mess. And he's ready to take some responsibility for his actions. He tells Matt he won't leave. Because him leaving him and Vicki was the biggest mistake of his life. Peter then tells Matt if he even tries to ring the Maxwell he has to get through Peter first. Matt tells Peter he has to kill him. Peter refuses and Matt punches him and kicks him. Matt continues to punch Peter begging him to do something. Peter gets knocked out. While Matt rings the bell. Peter wakes up and puts his arms around Matt's neck ready to kill him. Damon pulls Peter off of Matt and Matt gets knocked out.

In We're Planning a June Wedding, Peter meets with Matt and Kelly at the Mystic Grill. He wants Kelly and Matt to reconnect and for them to have dinner later that night.

The next day Kelly meets with Peter outside and Kelly asks Peter about a dagger that can be used against Katherine's bones. He's shocked that Kelly knows about this and can't believe Matt told her about this. He tells Kelly he already gave the dagger to Stefan. As Kelly is puking blood, she takes out a small knife and slashes Peter's throat.

Later in the evening that same day, Matt comes across Peter dying from his wound. Peter tells Matt that Katherine didn't try and kill him. It was someone else.

In I Was Feeling Epic, at the Mystic Falls Hospital, Peter comes out of the hospital while it's evacuating with a bandage on his neck. Peter tells Matt he heard the Maxwell bell and was told the patients need to be evacuated. Matt tells Peter they have to get to Grove Hill. Peter asks if Matt isn't ringing the bell then who is. Matt tells him it's Vicki.

Later at the Mystic Falls clock tower, Peter sees Vicki again while she begins to ring the Maxwell bell. He tells her he isn't going to stop her. Matt tells Vicki that Bonnie has a plan. Peter then tells Vicki he just wanted to see his daughter one last time. Then Peter and Vicki hug.

Peter and Matt watch the clock tower while Vicki is ringing the bell. They watch as Bonnie's spell contains the hellfire within the building and the underground tunnels.

Peter was initially a character who did not care much for family; he left Kelly Donovan and his children behind in search of a better life and with hopes to better his reputation; generally having no feeling or thought for the consequences of his actions. He admitted that he was ashamed to be a toilet scrubber and with the life he had been given. He also revealed instances where he was a gambler and cheated on his taxes.

However, as his character developed, Peter became emotionally attached to his children, developing a deep disdain for his earlier actions, blaming himself for what happened to Vicki and regretting ever leaving town. He admits that he tries not to think of Vicki too much as it is too painful, however, he is able to see her again in I Was Feeling Epic, which lightens his mood.

Peter has short light brown hair, blue eyes, a slim build and tall stature. He has mainly been seen wearing gray, blue or other light colored clothing. He was seen wearing a tuxedo and fanciful clothing during Stefan and Caroline's wedding. 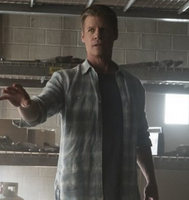 Retrieved from "https://vampirediaries.fandom.com/wiki/Peter_Maxwell?oldid=2767422"
Community content is available under CC-BY-SA unless otherwise noted.