PROM NIGHT IN MYSTIC FALLS — After making a decision that infuriates Klaus, Elijah proposes a life-changing challenge for Rebekah. Caroline finds that her carefully laid plans for the perfect Senior Prom night are disrupted by Elena, so she turns to an amused Klaus for a solution. Determined to get through to Elena, Damon and Stefan both attend the prom, but the evening begins to spiral out of control despite their efforts. When Elena suddenly lashes out in a way no one could have predicted, Matt turns to Rebekah for help. Finally, Bonnie makes a terrifying discovery, and Klaus receives a message that could change everything.

Damon: "She doesn't want the cure. She's just gonna start killing people if she knows we're still trying to get it for her."
Stefan: "So why don't we make her want it?"
Elena: "I don't need a babysitter."
Stefan: "Really? Last time I saw you, you snapped a waitress' spine."
Damon: "Don't eat the prom queen."
Elena: "I feel nothing for you, Damon."
Bonnie: (to Damon) "Elena's gone."

Caroline: "What kind of dreams?"
Bonnie: "Usually I'm at his grave. All of a sudden, he appears to me."
Caroline: "Oh, you never got to say goodbye, Bon. You're grieving, that is normal."
Bonnie: "When I woke up, the couch was on fire."
Caroline: "Oh..."
Bonnie: "I don't know if it's because I was emotional in my dream, or if Shane was right. Without his help, I'll lose control of my magic."
Caroline: "No, it's because you need a night off from mourning. And I'm gonna make sure that you have it."
Bonnie: "You look super hot, by the way."
Caroline: "You think?"
Bonnie: "Oh, yeah!"
Caroline: "Yeah!"
Bonnie: "Yeah!"
Caroline: "Yeah!"
Bonnie: "Matt and I are gonna have the sexiest date there."
Caroline: "You know what? I love Friend-Prom. And it's exactly what Prom should be, friends and memories. Yes, it's sucks that my boyfriend can't be here, but the three of us are going have the time of our lives."
Elena: "Hey Bonnie, heard you got your mind wiped. That sucks. Pretty dress, Caroline."
Caroline: "I know, you helped me pick it out months ago. When we were friends. Before you tried to kill me."
Elena: "I thought it looked familiar."
Caroline: (to store employee) "Can you press this for me? I'll pick it up later. Bonnie?"

Damon: "How long has it been? Eight, nine days?"
Stefan: "Yeah, eight or nine days, I don't know, I lost count."
Damon: "We lost count for the consecutive days in which Elena Gilbert is not killing anyone. I'd say that's progress, brother."
Stefan: "So, what we are going to do? Just, uh, throw the football around for another hundred and fifty years so Elena gets her humanity back? 'Cause I'm cool with that."
Damon: "She doesn't want the cure. She's going to start killing people if she knows we still trying to get it for her."
Stefan: "Alright. We can always make her want it?"
Damon: "Yeah, how you're gonna make an emotionless vampire want anything?."
Stefan: "Get her to flip her humanity switch."
Damon: "So what are you going to do? Pull a Lexi, bombard her with emotions 'til one of those sticks?"
Stefan: "Yeah, and if that doesn't work, then we got Plan B-- lock her up, keep her isolated until you and I figure out Plan C."
Damon: "And what happens when she gets slammed with every emotion she's repressed since Jeremy died?"
Stefan: "Well, then you, my friend, will be right by her side ready to help her through it."
Damon: "Right, 'cause you don't want to keep reliving history and when this is all over, you are just going to get out of our lives."
Stefan: "Bingo."
Damon: "Alright, how you wanna do this?"

Rebekah: "What am I missing?"
Elena: "Silas is appearing to Bonnie as my dead brother. Which means he still wants her to do the spell."
Rebekah: "So? The nice thing about having no feelings is you don't fear your enemies on the Other Side."
Elena: "I'm not worried about my enemies. It's people like Alaric and Jeremy. The Salvatore brothers are annoying enough as it is. Can you imagine if my brother came back to the living? He'd spend every waking hour trying to get my humanity back." 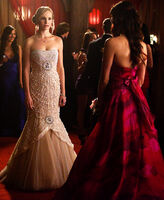 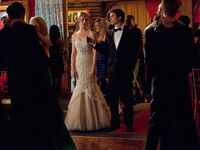 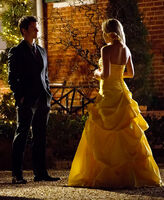 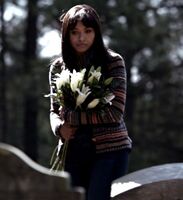 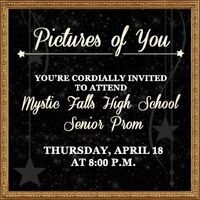