The slogan "Previously on Legacies" is heard at the beginning of all Legacies episodes since episode 2 (Some People Just Want To Watch The World Burn). These words are followed by a series of short clips that recap the scenes that are important for the current episode. All of this lasts for approximately one minute.

In season three, only four episodes had voiceovers. Matt Davis voiced over twice while Danielle Rose Russell and Aria Shahghasemi voiced over one time each.

There's a World Where Your Dreams Came True title card

Someplace Far Away From All This Violence title card 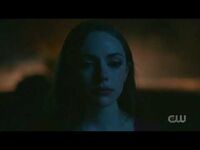 Opening Scene - Legacies 3x05
Example: intro from This is What It Takes