The Vampire Diaries Wiki
Register
Don't have an account?
Sign In
Advertisement
in: Episodes stuff, Lists, The Originals (series)

Previously on The Originals

The slogan "Previously on The Originals" was heard at the beginning of all Originals episodes since episode 10 (The Casket Girls). These words are followed by a series of short clips that recap the scenes that are important for the current episode. All of this lasts for approximately one minute.

In Season One, for the first 9 episodes (until Reigning Pain in New Orleans) of both the season and the show, there is a special opening, where the three main characters of the show, Klaus (Joseph Morgan), Elijah (Daniel Gillies), and Rebekah (Claire Holt), narrate briefly their history, mainly regarding the city of New Orleans.

In season one, Daniel Gillies voice-overed 5 times, Joseph Morgan & Claire Holt 3 times each and Danielle Campbell & Phoebe Tonkin 1 time each. Charles Michael Davis, Leah Pipes, and Daniella Pineda are the only ones who didn't do any voice-over all season.

In the second season's premiere, the episode opens with Rebekah (Claire Holt) narrating the events of the previous season to baby Hope as a fairytale. In season two, Joseph Morgan has voice-overed 10 times, Daniel Gillies 4 times, Phoebe Tonkin 3 times, Yusuf Gatewood 2 times and Claire Holt & Charles Michael Davis 1 time each. Leah Pipes & Danielle Campbell are the only main cast members who didn't do any voice-over.

In season three', For the Next Millenniums (3.01) opening was not a voice-over, but was a special narration opening by Klaus (Joseph Morgan), which served as an introductory monologue for the flashback scene opener. The episode A Streetcar Named Desire (3.14) did not feature a voice-over. Joseph Morgan has done 8 voice-overs, Daniel Gillies has done 4 voice-overs, Claire Holt & Riley Voelkel have done 2 voice-overs, and Phoebe Tonkin, Charles Michael Davis, Leah Pipes & Danielle Campbell have done 1 voice-over each.

There wasn't a voiceover in the first episode, as Vincent (Yusuf Gatewood) did a special naration opening. No voice-over was featured in the second episode either. Daniel Gillies has done 4 voice-overs, Joseph Morgan has done 2 voice-overs and Yusuf Gatewood, Charles Michael Davis, Riley Voelkel, Danielle Campbell & Phoebe Tonkin have each done a voice-over once.

This is the first and only season to have a proper voice-over in all of the episodes. 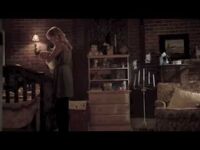