OUTRUNNING DEATH - When Stefan and Elena escape from Markos' control, only to find themselves stranded in a remote location, Stefan gets philosophical with Elena about her relationship with Damon. After their attempt to protect the doppelgängers goes badly, Liv and Luke come up with a dangerous new strategy. Damon recruits Matt and Jeremy to help him set a trap for Markos, who turns out to have a devastating surprise of his own. Bonnie finally admits to Caroline that she's been keeping the truth about the Other Side from everyone. Finally, while Bonnie searches desperately for a way to stop Markos, Caroline is witness to an unthinkable act of violence by one of the Travelers.

The episode starts with Damon having captured a traveler and interrogating him to tell him where Markos is so he can find Stefan and Elena but the only thing the traveler tells him is that it doesn't matter if he find Markos since he has whatever he needs and it's too late to do anything. Meanwhile, Stefan and Elena are tied up and being drained by Markos who needs their blood for his spell. A woman appears and frees Stefan who goes and frees Elena and they escape.

Stefan calls Damon to tell him that they escaped but he doesn't know where they are and they will try to find their way back home safe. They are walking down the road discussing when a car appears. The driver stops to pick them up and it's Maria, one of the travelers and the one who freed Stefan. Elena and Stefan wonder why she is helping them and Maria tells them that her husband, Julian, is inside Tyler's (Michael Trevino) body permanently and that means when Markos finish the spell, Julian will die since Tyler's body is a hybrid. She wants to find her husband and run away.

Enzo keeps bothering Damon to keep his promise and bring him back to life. He also pesters Bonnie since she is the one who is able to do it. Bonnie asks Damon to make Enzo stop but instead he tells her that since she is working with Liv on a spell to keep her alive when the Other Side collapses, they should include Enzo as well to the spell and save him too. Caroline comes to Bonnie with an idea of how to save Tyler; they can kill his body so the traveler will go and Tyler passes to the Other Side and then bring him back with the spell that will bring Bonnie back too. Bonnie can't lie anymore and she admits to Caroline that there is no spell and that she lied about it, something that Enzo also hears and he is mad about it. He demands from Bonnie to find a way and when she tells him to give up he says he will never give up as long as the Other Side still exists and he is there.

Meanwhile, Damon tries to make Markos appear and he steals all the travelers' bodies from the cave, leaving a note to Markos to come and find him. Markos does and he appears at the Salvatore house where he explains Damon his plan and that by threatening him that he'll destroy the bodies won't work since the bodies are not essential to his plan. To prove it, he kills one of the travelers. Damon tries to attack him but Markos knocks him out and tells him that he is not strong enough to kill him since he is full of doppelgänger blood and he channels the power of all the travelers. Julian, who's chained at the basement, hears the two talking and tells Damon that Markos doesn't know he is there and they should take advantage of that.

Elena, Stefan and Maria arrive at Mystic Falls but Liv and Luke ambush them and by using magic they cause their car to crush. Maria dies and Elena and Stefan try to get away from them. Liv and Luke want to kill at least one of them so the travelers won't be able to complete the spell that will strip away all the magic from Mystic Falls. In the meantime, the travelers started the spell and Liv and Luke start losing their magic power. Elena and Stefan's rings also stop working and they start getting burned by the sun. They run and hide to avoid the sun and head to find Damon, Caroline and the rest. Maria's spirit appears to Bonnie to pass to the other side and asks Bonnie to tell Julian that she tried to save him.

Back at the Salvatore house, Julian tries to help Damon to take Markos by surprise and he attacks him by biting him. Markos pushes him away while Julian's fangs disappear because of the spell that the travelers already started. Damon's ring stops working as well and the wound of the gunshot that killed him appears on his chest. Damon and Julian run away to get out of the range of the spell so they won't die.

Caroline tries to pack their things and leave the dorm and while Bonnie should be doing the same, she just sits without doing anything. Caroline asks her why she is not helping and Bonnie says that she might found a way to bring them back to life but she needs Enzo's help. Enzo finds Maria at the Other Side and she asks her if she knows the spell the travelers used to bring Markos back and Maria says she does and she is willing to help them, but with the Other Side falling apart, Maria is drawn away by the force that draws away the people from the Other Side. Enzo and Bonnie lose their only chance to manage to bring the ones they need back in life.

Jeremy finds Damon running in the street and picks him up and they go and find Stefan, Elena, Caroline and Matt. Matt and Jeremy decided to go back to Mystic Falls while the rest should try to get as far away as they can. Damon and Elena leave with Jeremy's car while Stefan and Caroline stay behind to wait for Bonnie. Julian appears and asks about Maria. Stefan tells him that Maria is dead and Julian starts a fight with Stefan where he ends up killing him by ripping his heart out. Julian says that that's the way to stop the spell and leaves, while Caroline is in shock crying over Stefan's body. The episode ends with Stefan appearing to Bonnie so he can pass to the Other Side. Bonnie is in shock seeing him and she can't believe that he is dead. Stefan asks to tell him that she found a way to bring them all back, Bonnie tells him that she did but she lost it and then Stefan passes through her to the Other Side.

Damon: "Yeah, I know. Find Markos, kill Markos. Save Mystic Falls."
Markos: "Nice place."
Damon: "It is polite to knock."
Maria: "Once the spell starts, magic will be stripped away, layer by layer."
Liv: "We have to kill Stefan and Elena."
Markos: "The spell has already begun."
Damon: "We have a problem."
Liv: "I'm sorry... One of you needs to die."

Caroline: "So Julian is trapped inside Tyler forever, or until he dies. So, I was thinking... what if he does die? You, know, maybe that's how we do it! That's how we get him out!"
Bonnie:"You want to kill Tyler?"
Caroline: "He'll go to the Other Side and then, when Liv does the spell to help you and Enzo, Tyler can come back. And speaking of, shouldn't you be, like, preparing, or talking to Liv? Or doing anything other than packing up our dorm room?"
Bonnie: "We have to be out of here right after finals, which I might skip, due to the potential extinction of magic in the place where I was spending my summer break."
Caroline: "Right, but I think the Other Side falling apart is slightly more pressing than late housing fees."
Bonnie: [sighs] "There is no spell. I made it up. The Other Side is collapsing, and everyone in it, including me, is going away for good. So, no. I don't think you should kill Tyler."

Bonnie: "He said you promised to bring him back."
Enzo: "Ah. You're paraphrasing. He said, quote-- "I will find a way."
Bonnie: "Whatever."
Damon: "Hello! Still here. And I know what I said."
Enzo: "Remind him that he doesn't have a very good track record for keeping promises."
Bonnie: "Please stop talking."
Enzo: "The the Other Side is on the brink of collapse. I plan on pestering all of you until I'm safely returned to the land of the living."
Bonnie: "You need to fix this before I lose my mind."
Damon: "Hey! I'm sorry. I've got two missing doppelgängers. I've got a Traveler that wants to rid our town of magic. And I've got the friendly banker, Mr. Sikes, in the coat closet. So, your escape from the netherworld is going to have to wait till tomorrow."
Bonnie: "I think he wants to be penciled in for today."

"The Truth In You" – The Garden District

"I'll Be Honest" – The Privates 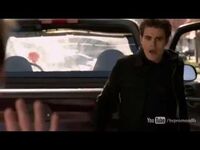 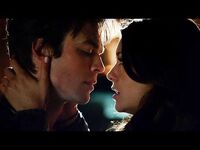 Retrieved from "https://vampirediaries.fandom.com/wiki/Promised_Land?oldid=2785711"
Community content is available under CC-BY-SA unless otherwise noted.