Ray Sutton was a character who first appeared in the first episode of the third season of The Vampire Diaries. He was originally a werewolf, until he was transformed into a rabid, unstable hybrid by Klaus. Eventually, he was killed by Stefan Salvatore, to protect his brother, Damon Salvatore.

Little is known of his early life.

Klaus and Stefan traveled through Tennessee to find Ray, so they could use him to lead them to his werewolf pack. During their search for him, they found two of his human friends, Samara and her friend Keisha, both of whom Klaus interrogated for information on his whereabouts before he ordered Stefan to brutally and viciously murder them.

They later arrived at Southern Comfort, a bar where Ray was found drinking. At first, Ray refused to help them, but Stefan decides to play a game of "Truth or Wolfsbane" in order to get him to talk. Ray remained resistant, but since Stefan compelled everyone at the bar to ignore them, none of the bar's patrons would come to his aid.

Stefan tortured Ray by using him as a dart board and throwing wolfsbane-coated darts all over his body every time he refused to answer a question. Stefan later left him with Klaus to take care of his brother Damon, who had been tracking them all summer. In his absence, Ray finally revealed the information that Klaus wanted: the location of the other werewolves in his pack. Klaus then fed Ray his blood and killed him to turn him into a hybrid.

Ray woke up at the werewolf camp. Since he had just awoken in transition, he needed to feed on human blood. Klaus learned that one of the people with the pack was a human, Ray's fellow werewolf Paige's boyfriend, Derek. After some coaxing, Ray finally fed on Derek's blood.

Despite feeding on blood to complete his transition, he began experiencing intense pain, and he began to bleed out of his eyes. Frightened, he told a confused Klaus that he was getting worse, not better, and reminded Klaus that he had promised him "It would feel better." Ray soon became rabid, and when Stefan tried to restraint him, he bit Stefan and fled the site. Stefan asked Klaus to heal him, but Klaus told him he was only willing to give Stefan the cure to the fatal hybrid bite if he retrieved Ray first.

While Stefan was searching for Ray, he discovered that Damon, Elena, and Alaric were in the woods looking for him. Ray stumbled upon the group while he was fleeing from Klaus, and once he noticed that Damon was a vampire, he became enraged and lunged toward him. Ray struggled as he attempted to bite Damon, and though Alaric shot him in the back with a crossbow, he remained unaffected and continued to attack him. Terrified that Damon would be bitten again, Elena threw a wolfsbane grenade to Damon, who throws it in Ray's face, incapacitating him long enough for them to tie him to a tree with wolfsbane and vervain coated ropes. Once Ray woke up while bound to the tree, he started to agonizingly transform into to his wolf form in order to break out of his restraints. Damon was forced to fight him in order to give Elena and Alaric the opportunity to escape. Ray almost overcame Damon, but Stefan arrived just in time and ripped Ray's heart out.

Ray seemed to be a bit of loner, but still had some friends to keep in contact with. Like most non-original werewolf-vampire hybrids, Ray was a bit aggressive and showed a hatred for vampires.

Ray was an non-original werewolf-vampire hybrid with short, brown hair and blue eyes. He had some facial hair and wore a purple-red plaid shirt with a gray shirt underneath it. He had a slim build and somewhat tall stature.

Ray possessed all the standard powers and abilities of a non-Original werewolf-vampire hybrid.

Ray had the typical weaknesses of a non-Original werewolf-vampire hybrid. 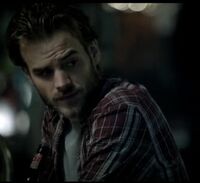 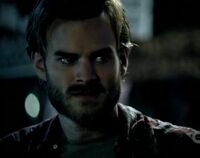 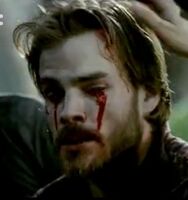 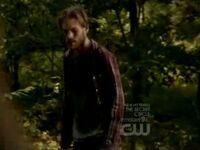