View source
watch 01:56
Who is Rayna Cruz?
Do you like this video?
Play Sound

Rayna Cruz was a recurring character and the primary antagonist in the seventh season of The Vampire Diaries. She was a Shamanic Huntress hailing around the 19th Century, the daughter of Vicente Cruz, who was a member of the Brotherhood of the Five, and was a fierce vampire huntress whose sole purpose was to eradicate and incarcerate vampires within the phoenix stone.

After being forced to kill her father by Julian, she became enhanced by a tribe of shamans to get vengeance on Julian, his Heretic family, and all vampires. Her main target was Stefan Salvatore who was stabbed by her when she attempted to kill Damon. The wound from her sword marked him allowing her to find Stefan anywhere and compelling her to kill him. She was willing to kill anyone of any species who dared to stand in her way.

After the Phoenix Stone was destroyed, she writes down the names of all the vampires that escaped and has the gang go after them. She later agrees to give her remaining life to Bonnie Bennett to save her and while the ritual to transfer is almost completed, Rayna reveals that Bonnie will become like her and stabs herself, thereby dying for the final time.

Rayna was a member of the Cruz Family.

Rayna was born to a man named Vicente and an unknown mother in New Orleans, but at some point relocated with her father to St. Malo, Louisiana. Her father was one of the Brotherhood of the Five. As he traced his tattoo for her to see, Rayna asked why she could not see the Mark, and when she would get hers, showing she admired her father and wanted to be a vampire hunter like him. Eventually, she convinced her father to train her as a vampire hunter, and Vicente gave her a short sword that would eventually be turned into the Phoenix Sword.

When she was older, while training with her father and finally besting him in a moment in their sparring, Julian attacked the settlement they lived in. Her father tried to save the villagers, however, he lost against the old vampire. Rayna interrupted Julian before he could kill her father and told him her father was one of the Five, hoping the revelation would persuade the surprised Julian to spare Vicente in fear of being afflicted with the Hunter's Curse. Julian, realizing that if he spared Vicente that the hunter would never stop trying to kill him, found a loophole to his conundrum. Instead of killing her father, and receiving the Hunter's Curse, Julian compelled Rayna to kill him. Forced to execute her father, Rayna told her father she couldn't stop, and he told his daughter he knew she couldn't, not to blame herself for it was Julian's fault, and to remember what he taught her to carry on his legacy while he would always be with her. Rayna then stabbed her father with the sword he gave her years earlier.

In order to get revenge, Rayna teamed up with a group of Native American shamans who gave her a tea of protection, shielding Rayna from any magic used to harm her, then sacrificed themselves and cast a spell on Rayna, endowing her with powerful abilities that would allow her to kill vampires, such as increased strength to rival ancient vampires, slower aging, the urge to kill vampires, the ability to find any vampire she stabbed with her Phoenix Sword, and granting her multiple lives which allows her to come back from the dead. She was also bestowed with the phoenix sword, the sword her father gave her as a girl, which the shamans enchanted for her, turning the stone in the hilt into the Phoenix Stone. This granted Rayna with two powerful and mystical artifacts that when combined together can entrap any vampire's soul within the stone where they are forced to endure a personal hell for all eternity, and allows her to find any vampire she marked with her sword.

For a decade Rayna chased a vicious serial killer vampire named Ambrose within and outside of Memphis. During this time things got personal between them with Ambrose framing Rayna for many of his violent massacres. He even went as far as to turn her boyfriend into a vampire, which led to her having to stake him. She eventually was able to catch and kill Ambrose and achieve her revenge.

At some point in the mid-late 19th Century, she began to hunt the Heretics along with Julian and Lily Salvatore. She pursued them across Europe for decades and at some point, branding Beau with an "X" shaped scar and killing Julian, imprisoning his soul within the Phoenix Stone.

At some point before the Originals fled New Orleans, Rayna returned to her birthplace. Once back, she wreaked havoc on the vampire community for years earning a fearsome reputation that even made Klaus himself fearful, as she killed many of his vampire friends and allies. She also came across the Strix at some point because Aya knew her.

In A Streetcar Named Desire, Stefan purposefully removes the magical paste patch Freya used to stop Rayna from sensing him, so that she can hopefully charge through The Strix's legions of ancient vampires in an attempt to reach him as a distraction tactic for Stefan, Hayley, and Marcel to rescue Elijah and Klaus. Rayna arrives at the gates of the compound and quickly dispatches the guards allowing her to enter the building. She is quickly confronted by Aya and her backup of vampires and begins to battle them. Rayna does battle with them and is able to wound and kill an unknown number of them before being killed. She possibly killed all present but Aya, as Aya, who's shoulder was stabbed by the Phoenix Sword, making Aya a future target for Rayna, dragged in Rayna Cruz's corpse alone. Hayley, however, staked Aya in the heart as revenge for Jackson's murder.

Rayna is ruthless and unstoppable. She also seems to have a pathological hatred of vampires. Stefan Salvatore, who she is increasingly obsessed with destroying, has become her number one priority in hunting due to his constant success in eluding her, so much so that all other vampires don't even matter to her. This is revealed to be because the shamans who made her, also gave her a relentless supernatural urge to hunt down and kill vampires that have been marked by her mystical sword, any other vampires that dare to cross her path, and any people (regardless of the species) who dare to involve themselves with vampires she hunts, much like the hunter's instinct present in members of the Brotherhood of the Five. This seems to make her mentally unstable as she gets old, as she accidentally murdered a supermarket cashier, mistaking her for a vampire. She felt compelled to kill her due to the hunter's instinct she was spelled with. She is also skilled at manipulating people as she comes across as a senile old woman to Mary Louise, Nora and Bonnie. Only after the two Heretics leave, does she reveal her true nature to Bonnie and attempts to strangle her to get Bonnie to free her, showing annoyance for Bonnie associating with vampires. She is also very stoic and taciturn as she doesn't display much emotion and rarely speaks.

Though it should be noted that Rayna does not appear to hate all vampires, just ones that are like the one who ruined her life, as she mentions briefly that she had a vampire lover once. But also believes that vampire-human relationships do not work out in the long run, as she ended up staking him in the heart for unknown reasons. So she apparently is very capable of looking past her own hated of vampires and capable of feeling about them in a positive way on occasion.

In the flash forwards, Rayna still appears to be obsessed with hunting Stefan. Even if she has to take someone he cares for hostage to lure him to her. She even successfully captures and holds Damon hostage, as he tried to get there and stop her before Stefan wandered into her trap. Once Stefan was captured she admitted she was exhausted chasing him, and gloated over her victory. But when she approached for the kill Rayna admitted she was reluctant to go through with it. Once again showing that she does not view all vampires in the same light, openly admitting that she does not actually want to kill Stefan even after all the trouble she had to go through of hunting and catching him. Saying instead that she knows that he does not deserve that mark he has and is even willing to transfer it to a more deserving vampire.

As a young woman, Rayna has long black/dark brown hair and dark brown eyes. According to Damon, she bears a resemblance to Elena Gilbert and her three doppelgängers. She also had a very dark exterior and wore a dark leather jacket.

As an old woman, Rayna had medium length gray hair and wore a mental patient's attire, given she was committed for stabbing a person who she initially believed to be a vampire. 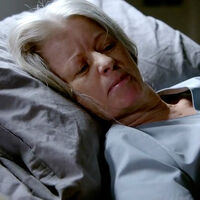 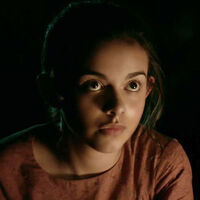 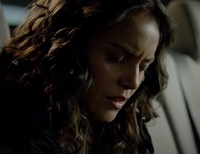 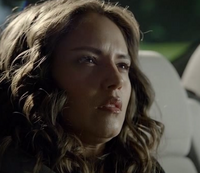 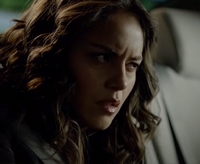 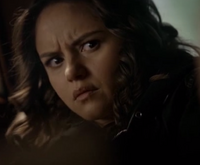 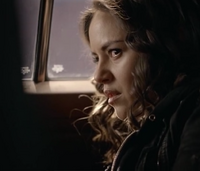 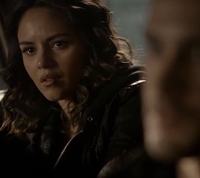 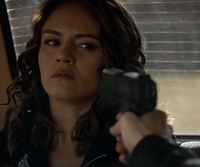 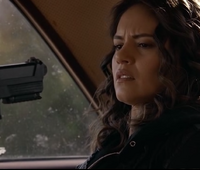 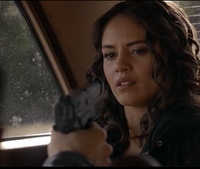