It has been suggested that this article be merged with Rebekah Mikaelson/Relationships. If you disagree, leave a message here.

Were Family, Brother/Sister, Former Allies, Former Enemies; Rebekah was the only sibling to mourn Finn's death, Rebekah now hates Finn for what he did to their brother Kol and their niece Hope, Rebekah and Finn loved each other and cared for each other once, Finn's delusion of what their mother did to them drove them apart.

When Rebekah was born.

The strained-sibling relationship between the Original Vampire siblings Rebekah and Finn. The two siblings do not share a close relationship, partly due to the fact that they were not able to spend much time together while Finn was incapacitated by a silver dagger for nearly 900 years and dead for several years after he was awakened, and partly due to the fact that Rebekah has tended to side with their half-brother Klaus. Finn and Rebekah have not physically interacted with each other since The Murder of One.

Finn was the second child of Mikael and Esther, after their first-born child, Freya. Rebekah was their fifth child and second daughter. Their mother, with on the suggestion of their father, turned them into vampires to ensure they would not die at the hands of the local werewolves like their youngest son Henrik did in the early 11th century. Once they had been transformed, Rebekah seemed to relish in being a vampire, though she secretly always wished she could have a normal life, and preferred not to think about it, since she knew that growing old and having a family of her own was not in the cards for her. Finn, however, was more like his father Mikael in the way that he quickly began to hate his vampirism and what it did to his family, and became much more vocal in this self-hatred than any of his other siblings. As all vampires' personalities become heightened after they are turned, Finn's ultra-moral beliefs only grew more pronounced after he became a vampire.

In 1002, when the Originals came upon Lucien, a servant in a nearby castle, Finn and Rebekah both voted to let him live. Niklaus had the deciding vote and with his help, the Originals were presented as nobles, no longer having to constantly be on the run.

In the early 1100s, the Mikaelson siblings, who were living in Italy at the time, were tricked by a group of supernatural vampire hunters known as the Brotherhood of the Five. Rebekah was seduced into falling love with one of the hunters, Alexander, while Finn and Rebekah's other brothers were invited to a sleepover by the rest of Alexander's brothers. The hunters had acquired daggers that were capable of neutralizing the Originals, and they used them to great effect—Rebekah was daggered by Alexander, while his fellow hunters ambushed the other Originals, daggering them one by one, including Finn. Luckily Finn and Rebekah's half-brother, Klaus, who, unbeknownst to the hunters, was part werewolf, wasn't effected by the daggers, leaving him able to kill all of the vampire hunters and undagger all of his siblings, with the exception of Finn. He left Finn daggered for centuries afterward, as he'd grown sick of his judgmental attitude. Rebekah would later show great disgust in what happened to Finn, though, at the time, she didn't do anything to save her brother.

In 1702, when Mikael found the siblings in Spain, Rebekah was tasked with getting herself and the daggered Finn onto the ship so they could flee while Klaus and Elijah tried to convince Kol to leave with them.

About 900 years later, in Bringing Out The Dead, the dagger was pulled out of Finn by his brother Elijah, who also undaggered Rebekah and Kol. She had been daggered a number of times by Klaus over the centuries, while Finn had been rotting in the coffin Klaus kept him in. Both Finn and Rebekah angrily attacked their half-brother for his crimes against them, the former stabbing him in the hand and the latter stabbing him in the stomach, though they knew they wouldn't kill him. They planned on leaving Klaus behind and setting off with their brothers Elijah and Kol, but were interrupted by the sudden and unexpected return of their mother, whose body had been preserved by her dear friend and mentor Ayana after Esther's death. She told them she wanted to be a real family again, which changed all of their plans.

In Dangerous Liaisons, the family held a ball to celebrate their family's reunion after so many years apart, and all of the Mikaelson children, aside from Finn, were under the impression that Esther was genuine about her desire to live as a family again. However, Esther's plans were soon revealed to be much more sinister. Finn, still hating being a vampire, joined his mother in her plan to link all of her children together so what would happen to one, would happen to all. After celebrating at a reunion ball with his other siblings, Finn and Esther secretly complete the spell, linking all of them together by dripping the enchanted blood of a doppelgänger, Elena, in their champagne. Finn assured his mother that when the time came, he was prepared to die in order to kill the rest of his siblings as well.

In All My Children, Elijah brought up to Rebekah how something didn't seem right with their mother. She told him to ask Finn, since Finn had been spending a lot of time with Esther, but Elijah admitted that he didn't trust Finn, as he knew he'd always hated being a vampire. Rebekah disagreed however, and insisted that Finn seemed just as intent on reuniting their family again as the rest of them. However, it was later revealed that night that Esther, who was channeling the entirety of the Bennett bloodline, living and dead, was working with Finn to reverse the spell that turned them into vampires, with the goal of killing Finn, and, through the spell that linked them, killing the rest of the Mikaelson children along with him. Finn and Esther attempted the spell at the Witch Burial Ground but were thwarted, and ultimately, Finn and Esther fled from Mystic Falls.

In Break On Through, Rebekah ran into Sage, Finn's lover from 900 years ago, and the only person he ever turned into a vampire. Sage had heard that Finn had finally been undaggered and came to Mystic Falls to look for him, but Rebekah, who has never liked Sage, told her that Finn must have moved on, since he hadn't mentioned her since being undaggered and since he was fully willing to commit suicide with no thought of her.

In The Murder of One, when Klaus found Finn in the middle of a city, needing his siblings' blood to undo the linking spell, Finn ran away from him, because he had no interest in listening to anything Klaus had to say. However, when Finn ran into a nearby alley, where he was cornered by Rebekah. She told him to come quietly, having learned of his role in their mother's plot, but Finn refused, angry that she would side with Klaus over him, especially after she knew, like he did, especially the fact that Klaus left Finn daggered for nearly a century. She argued that at least Klaus wasn't trying to make them extinct, right when Klaus, knocked Finn out and dragged him back to Mystic Falls. When he awoke in the Mikaelson Mansion, he was brought into the foyer where Sage was waiting for him, in hopes that Finn would see the love of his life and find the will to stay alive and willingly give up a sample of his blood so that they could all be unlinked. Soon after, though, Finn was killed with a white oak stake by Matt Donovan. Rebekah was openly upset and sad about her older brother's death, especially when Klaus brushed the death aside, calling Finn a lovesick fool and a traitor. Rebekah seemed the most upset about Finn's death out of all of her siblings.

In The Five, when Klaus retold the story of the Original Vampires' encounter with the Brotherhood of the Five, Rebekah brought up how at least she fared better than Finn, and scolded her half-brother about how he had daggered him for nearly a millenia.

In The Brothers That Care Forgot, having returned from the dead, Finn asked his brothers where Rebekah was since she was no longer living with them. He asked why someone who was so blindly loyal to Klaus would suddenly not be by his side. Klaus and Elijah refused to answer, but Finn remained focus on her, telling them that their mother had been tracking Rebekah down ever since she came back to life. While he rebuked Klaus and Elijah for refusing to become mortal again, Finn seemed to be rather approving of Rebekah clinging on to her humanity, being confident that Rebekah would respond differently and accept Esther's offer to be human again. Later, Finn revealed to Cami that her body was being prepared as a new host for Rebekah's spirit, as part of Esther's plan to put her children into mortal bodies so they'd no longer be cursed as vampires.

In The Map of Moments, Klaus explained to Rebekah, Elijah, and Hayley the story he had heard from Finn about how Esther was originally barren, and had sought a magical fix from her powerful witch sister Dahlia that, while allowing her to have children, came at a cost - Dahlia demanded every first-born Mikaelson child as payment for the spell she cast. When Klaus informed them that their eldest sister Freya had actually not died from the plague, as they were told by their mother, but instead was given to Dahlia as payment, Rebekah remarked, "Well, no wonder Finn hates us. He lost the sister he adored, and instead got a judgy pack of siblings who found him unbearably dull." 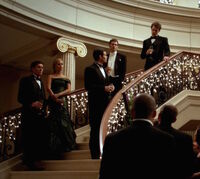 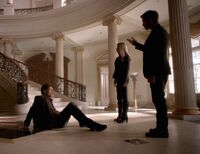 Retrieved from "https://vampirediaries.fandom.com/wiki/Rebekah_and_Finn?oldid=2778754"
Community content is available under CC-BY-SA unless otherwise noted.