It has been suggested that this article be merged with Rebekah Mikaelson/Relationships. If you disagree, leave a message here.

Former Allies, Frenemies; They worked together, Thierry betrayed Rebekah by leaving her to fend for herself in the hands of Papa Tunde, Rebekah believed that Thierry was a coward for leaving her in Papa Tunde's hands.

Season 1 of The Originals


The relationship between the Original Vampire Rebekah and the Vampire Thierry Vanchure. Rebekah got to know Thierry in the Garden after Marcel had left her for her brother and their empire. Rebekah plotted with Thierry to take the French Quarter from both Marcel and her brother Klaus. This failed miserably when Thierry decided to ditch Rebekah in the middle of a dispute with Papa Tunde and he left her to deal with Papa Tunde on her own. This destroys their alliance and Rebekah grows to dislike him for his cowardice.

They don't interact onscreen after this. However, any sort of future alliance that may have happened ends with Thierry's death later on in the series.

In The Casket Girls, Thierry has already gotten to know Rebekah, Klaus' sister, while she was exploring The Garden. when Rebekah wanted to show Davina of what kind of man Marcel was. Davina was with Timothy and Josh when Rebekah showed them Thierry, who was Marcel's most trusted friend. She explains that Thierry was tricked by Klaus and even though Marcel knows of this he let his friend rot in The Garden. Later after Rebekah brought Davina home, she went back to The Garden and talked to Thierry. Rebekah explained to him, that her brother has for a 1,000 years taken what ever he wanted regardless of the consequences. Rebekah then tells him that Marcel seems to allow it and her other brother stands by his side no matter what. Thierry then asks her what she wants him to do about it, she tells him she wants his help in taking New Orleans from her Marcel and her brothers. And now that they have Davina on the inside to help them, Thierry agrees with a smile.

In Après Moi, Le Déluge, after Davina started becoming ill and Marcel took her with him to hide from everyone until she got better, Rebekah went to The Garden to talk to Thierry. He's a little mad at Rebekah and says that her plan for Davina is failing, Rebekah then asks where Marcel might have hidden himself and Davina. Thierry won't tell her because, he thinks she will just abandon him, like Marcel. But Rebekah tells him she is not abandoning him and promises to get him out of The Garden as soon as possible, Thierry then tells her to look for them at the docks.

In Dance Back from the Grave, Rebekah and Thierry go to the docks to investigate some of the recent strange happenings in the quarter. They are cornered by Papa Tunde who places a spell on Rebekah so he can use her as a source of power. Thierry on seeing this runs back to the abattoir but sits drinking instead of telling anyone about it.  He says nothing until Elijah, agitated because he cannot reach Rebekah on her phone corners him in the courtyard and threatens to kill him. Thierry tells Elijah what happened and and tells him not to tell Klaus, Elijah then leaves to find and help Rebekah. When Rebekah is saved she finds Thierry and turns on him because he left her to Papa Tunde, Thierry told her that even tough they had a deal down the line is is every man for himself. Elijah then appears and snaps Thierry's neck.

In Le Grand Guignol, Thierry aided Rebekah and Marcel to kill Bastianna Natale by setting himself up as bait to distract Bastianna and Genevieve. Rebekah convinced Thierry to do it by asking him 'from one stray dog to another'.

Rebekah : "I, too, am resilient, and I'm tired of being oppressed. For one thousand years, my brother has taken what he wants in whatever way he wants, regardless of the consequences. Marcel seems determined to allow it, and Elijah stands right by his side, futilely awaiting the day that he'll change."

Rebekah : "Despite your dire warnings to Marcel, he just can't seem to quit my brother. The two of them stand side by side ruling this city whilst you're left in here to rot. I want you to help me take New Orleans right out from under all of their noses, and I have something they won't see coming. Someone on the inside. She's quite the resilient girl herself."

Thierry : "So much for your grand schemes of using Davina for revenge."

Rebekah : "Survival first, plots to overthrow my brother second. Where would Marcel hide something precious to him?"

Thierry : "You think I'm just gonna offer that up so you can leave me here to rot? Water runs downhill. You think I have to have drowned before to know how much that will suck?"

Thierry : "Used to run things down here for Marcel. Thought you'd like to see what I found before Klaus did."

Rebekah : "Not a day out of the Garden, and you're already proving yourself useful."

Thierry : "We made a deal, and if it screws things for your brother, I'm all for it. Though, to be honest, this stuff makes my skin crawl. I've never seen anything like this."

Rebekah : "I have, a long time ago. Somebody is copycatting a very dangerous witch. They draw their power from sacrifice."

Rebekah : "Ugh! I should rip out your coward heart."

Thierry : "What, Rebekah? We made a deal to take out your brother, but at he end of the day, it's every man for himself."

Rebekah : "I am so sick of self-serving narcissists. Are men simply incapable of committing to an alliance?"

--Dance Back from the Grave

Rebekah : "Look. We have one shot at this, and I know our chances of success are sweet bugger all, but we've got to do it. So please, one stray dog to another, help us."

Thierry : "Not many go up against those odds and live to tell the story. Have you?" 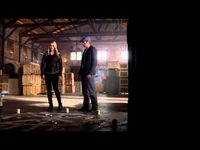 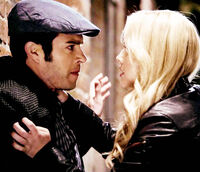 Retrieved from "https://vampirediaries.fandom.com/wiki/Rebekah_and_Thierry?oldid=2780923"
Community content is available under CC-BY-SA unless otherwise noted.