Richard Lockwood was a character who first appeared in the fourth episode of the first season of The Vampire Diaries. He was the former Mayor of Mystic Falls, Virginia and a carrier of the werewolf gene. He married a human named Carol and they had a son together, Tyler. During Founder's Day, he was affected by the Gilbert Device, leading others to believe he was a vampire and killing him because of it.

Little is known of his early life.

Mayor Lockwood had a strained relationship with his son Tyler. When Tyler got into a fist-fight with Matt Donovan at a party, he told Tyler that he would never embarrass his family again -by backing from the fight. Even though he was married, he was attracted to Pearl.

Richard was a member of the Town Council. In the season finale, during Founder's Day, John Gilbert persuades Richard into sanctioning a strike against the tomb vampires using Johnathan Gilbert's Device. Richard and John knew that the Sheriff Forbes would never approve their plan, so they staged a coup against her.

Richard rallied her deputies to their cause while John knocked her out and cuffed her in her office. Shortly before it began, he found his son and told him to go home, showing genuine care for Tyler for the first time.

Richard and Tyler were both affected by the device, however when Richard was injected with vervain by the deputies, it did not affect him. We can only guess that while he was potentially a Werewolf, he had never activated the curse by killing somebody. When Damon told him in the burning basement that he was a vampire Richard was shocked, and staggered backward into a vampire who snapped his neck, killing him.

He often went to the extreme to get what he wanted, like defying Sheriff Forbes and using the Gilbert device on Founder's Day.

In The Turning Point, he also was shown to be violent, and a bully, when he tried to force Tyler and Jeremy to fight. He takes them outside, and tells them to fight, rather than talk to solve their problems. This probably was because he was under the influence of the full moon. Tyler suffered a lot of abuse from Richard. Alaric once called him a "douche" and Tyler once called him a "dick", Carol once called him a "jerk". He also flirted with Pearl. Although he seems kind and amicable to the outside world, he was actually quite selfish, for when Mr. Tanner dies, he was more concerned with how his death would affect the football team, and finding a replacement. He was also extremely arrogant, and a control freak. The night they were rounding up all the town vampires, he was willing to put innocent peoples lives in danger. He helps John Gilbert execute his plan to capture and kill the tomb vampires. However, it backfires when he is also affected by the device, that neutralizes the vampires, because he carries the werewolf gene, with him, and the deputies think he was a vampire too, and lock him up in the basement, where he was killed by one of the tomb vampires.

Richard had a slim build and a tall stature, and he wore dark colored suits. He had dark, brown hair and brown eyes. 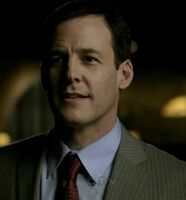