View source
watch 01:35
Who is Rose-Marie?
Do you like this video?
Play Sound

Rose-Marie, commonly known as Rose, was a recurring character of The Vampire Diaries. Rose was a vampire and the best friend of fellow vampire Trevor. When Katerina Petrova was on the run from Niklaus Mikaelson, Trevor helped her escape and sent her to Rose to get help. While in their hideout, Katherine tricked Rose into feeding her vampire blood and then killed herself to turn into a vampire as well. Klaus pursued Rose, Trevor, and Katherine for 500 years for their roles in presumably ending the Petrova bloodline and ruining his chance at breaking his curse. When Rose and Trevor learned of the existence of a Third doppelgänger, Elena Gilbert, they kidnapped the young girl in hopes of exchanging her for their freedom. However, while Klaus' brother and cohort, Elijah, pardoned Rose for her role in aiding Katherine's escape due to her loyalty toward her friend, he killed Trevor for betraying his loyalty to him and Klaus. Rose then fled after Elijah was staked and supposedly killed by Damon Salvatore.

She later joined forces with the Salvatore brothers to defeat Klaus and had a brief sexual relationship with Damon in the process. She was bitten by Jules, a werewolf, and was ultimately mercy-killed and staked by Damon, who cared about her and wanted to end her suffering.

Her ghost visited Jeremy in season three when he, Elena, and Damon were trying to learn which Original vampire sired their bloodline. Rose revealed that she was turned by Mary Porter who turned out to have been sired by Klaus.

Rose was born in 1450 in St. Austell, England. She was later turned in 1472 by Mary Porter. In 1492, her friend Trevor sent Katerina Petrova to the cottage where they were staying to hide from Niklaus Mikaelson. Rose was furious when she heard Katerina had fled from Klaus with the moonstone and feared retaliation from Klaus when he learned of what she had done. She locked Katerina in a room with intentions of returning her to Klaus after sunset. Katerina, desperate to avoid being sacrificed to break Klaus' hybrid curse, stabbed herself in the abdomen and was about to die. Rose, unwilling to face Klaus' wrath if he learned Katerina had died on her watch, fed her her vampire blood to heal her, not realizing that this was a trick on Katerina's part to get Rose to give her what she needed to survive.

When Rose accidentally left Katerina alone to talk privately with Trevor about what they needed to do, Katerina hung herself, and since she had Rose's blood in her system, she then awoke as a vampire in transition. She completed the transition by feeding on the human owner of the cottage after Rose accidentally staked the woman while trying to kill Katerina. Rose was furious at her for this betrayal, as now there was no human to keep unwanted vampires out of the cottage, and Katerina's blood was now no longer viable for the ritual to break Klaus' curse. Rose angrily stated that Katerina had signed all of their death sentences due to her actions, but Katerina replied, "Better you die than I," and fled before Rose and Trevor could catch her. Rose and Trevor, knowing that Klaus would be out for their blood in punishment for accidentally aiding in Katerina's escape, and went on the run afterward to hide from Klaus and the rest of the Original vampires.

In Heart of Darkness, she came to Jeremy, Elena, and Damon in ghost form so that she could communicate with Jeremy, who is a medium, from the Other Side. She said she was happy to be able to go where she pleased without having to worry about being on the run, and told Jeremy to tell Damon that he was still "dripping sex," though Jeremy was too embarrassed and disgusted by the comment to share the message. She then stated that she missed Damon and Elena before admitting that she was rooting for the two of them to finally end up together. After that, she revealed that she was turned by Mary Porter, but Rose didn't know which Original turned Mary. She then went to search for Mary and returned later, letting him know where she lived so they could track her down.

Rose appeared to Jeremy one last time in the car on the way back to Mystic Falls, and told him that while Jeremy might be too young to understand, she believed that Damon and Elena were good together because they challenged each other and made each other better. She then added that Damon could be either the best or worst thing for Elena before she left again.

Rose seemed to care for others, vampires and humans alike, and stated on several occasions that she has never enjoyed taking human life. However, she was shown to be rather violent at times when it was necessary. For example, after she and Trevor kidnapped Elena, she smacked her across the face and sent her flying backward after she snapped at Elena to be quiet, as she was nervous about the arrival of Elijah and their intention to trade Elena for their freedom. She has shown to be sad for her fallen friend, Trevor, who she had turned many years ago, and considered him to be her only family. She was known for being loyal to her friends, and once she teamed up with Stefan, Damon, and Elena, she fought for them by giving them the information they needed in their fight against the Originals. Even after her death, she was shown keeping an eye on her friends from the Other Side.

She was willing to give up both Katherine in 1492 and Elena in 2010 to Klaus in exchange for her and Trevor's freedom. She was brutal to Elena in Rose, backhand-slapping her so hard Elena spun in mid-air much like a spinning toy before landing unconscious on an old sofa. However, this may have been an attempt to keep her distance emotionally from a human she was delivering to her death. In 1492, after Katherine committed suicide by hanging herself with Rose's blood in her system and consequently becoming a vampire, Rose tried to kill Katherine by staking her. However, Katherine quickly used an old human woman as a shield and Rose inevitably staked her. She screamed in horror over this act, despite the fact that she had compelled the old woman to allow her to live there and was compelling her to do household chores. She may have truly cared about the woman or was just using her for protection from Klaus, though there was no sign Rose was hurting her or feeding on her. This suggests that she regards human life as more than a source of food or to be exploited, although it must be said again that she did compel the woman in that cottage.

Judging from how she seems to be interested in helping Elena's friends to keep Elena from being killed, her previous acts were those of desperation and not a reflection as to how she regards humans. Unfortunately, Rose was bitten by a werewolf (Jules), which is fatal to vampires. As it slowly killed her, it caused hallucinations along with the tremendous physical pain. She essentially went rabid and attacked Elena several times, thinking she was Katherine. After she left the house, she killed three people in her rabid state. Her behavior toward Elena and killing those humans caused her to feel a profound guilt from these actions, and wept when she regained her senses. She herself said she disliked taking human life, even when she was first turned all those centuries ago.

Rose was an attractive and pretty young woman. She had dark brown hair and green eyes. In the past, she had long wavy hair, but in the present, her hair was cropped in short and simple bob. Her height is about 173 cm, or 5'8". In the present day, she was shown to dress casually in jeans, boots, long-sleeved shirts, and a leather jacket over top of it, and wore little jewelry. While she lived in the 15th century, however, she wore the long-sleeved dresses that were the style at the time.

Rose possessed all the standard powers and abilities of a non-Original vampire.

Rose had the typical weaknesses of a non-Original vampire.

Rose: (to Elena) "Again with the questions. Haven't the Salvatores been teaching you your vampire history?"

Rose: (to Elena) "Trevor and I have been running for 500 years. We're tired. We want it over. We're using you to negotiate ourselves out of an old mess."

Rose: (to Elena) "Because you're a Petrova doppelgänger. You're the key to breaking the curse."

Rose: (to Stefan) "I don't need your help, but I think you need mine. Elijah may be dead, but this isn't over."

Rose: (to Stefan) "It isn't over. The Originals, they'll come for her. They have to. They're doing it for him."

Rose: (to Damon) "It's an observation. Being in love with your brother's girlfriend must be difficult."

Rose: (to Damon) "I'm older than you and stronger. Don't get on my bad side."

Rose: (to Damon) "It's a lie, you know. There's no switch you can turn off. Sure, when you're a newbie... But, after a couple of hundred years... you just have to pretend."

Rose: (to Damon) "It's not nice to leave a girl naked so early in the morning."

Rose:"I'm gonna stay and help you."

Rose: "Because I like you. I believe in friendship. I happen to have a vacancy in that department, and you can use all the friends you can get."

Damon: "Are you sure you can do that?"

Rose:"I don't love men who love other women. I think more of myself than that. But, that doesn't mean I can't be your special friend."

--By the Light of the Moon

Rose: (to Elena and Damon) "It's the worst part about it: the hunt, the need to kill, the thirst, the pleasure it brings you afterwards. I wasn't meant to be evil. It hurts."

Rose: (to Elena) "You can never forget it, what it's like to be human. It haunts me. It's the only thing that's kept me going. It doesn't hurt as much anymore."

Rose: (to Damon) "Who would have thought you'd be a nice guy?"

Rose: (to Damon) "That would be nice. Maybe I'll see Trevor too. I'm not afraid anymore."

Rose: (to Jeremy about Damon) "Tell him he's still dripping with sex too. (Jeremy stares at her, clearly embarrassed and grossed out) Fine, tell him I miss him."

Rose: (to Jeremy) "And tell him I'm rooting for him and Elena."

Rose: (to Jeremy) "Are we there yet? Don't tell them I'm here. They had a fight. I know you want to stop it. Protect her from him. But you're young, you don't see what I see. It's not just that she makes him a better person-- she does-- but he changes her too. Damon challenges her, surprises her. He makes her question her life, beliefs. Stefan is different-- his love is pure. He'll always be good for her. Damon is either the best thing for her or the worst." 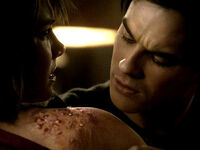 Rose as a ghost 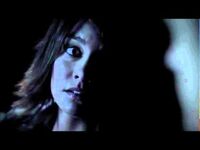 Rose about to be staked 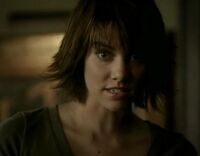 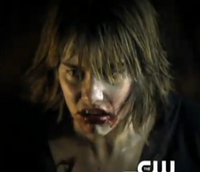 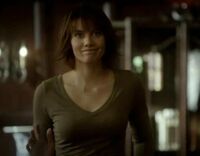 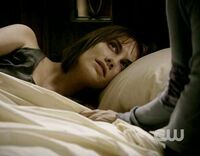 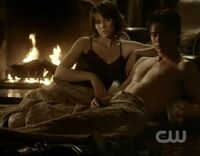 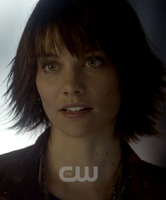 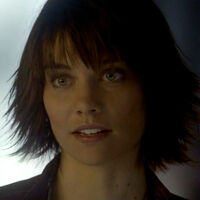 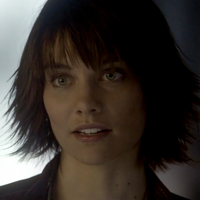