Rudy Hopkins was the interim mayor of Mystic Falls, the ex-husband of Abby Bennett Wilson and the father of Bonnie Bennett.

Rudy was a relative of the Bennett Family.

Not much information is known about him except that he gave his daughter his ex-wife's last name and that according to Bonnie, he doesn't want to get involved or care to know anything about witchcraft.

When Bonnie walked in the grill, he told his daughter that Mystic Falls could use a little more rules and that he wants to protect the town. Bonnie said that she can protect the town herself. Rudy replied that although he is aware of Bonnie's powers, he is still her father and said that it means he gets to protect her. Later he is seen talking to April Young with Sheriff Forbes on the murder of the Founder's Council and April told them that her father, Pastor Young, was brainwashed by Professor Atticus Shane to kill himself along with the other 11 founding members.

In Catch Me If You Can, Rudy Hopkins ordered Sheriff Forbes to take Professor Atticus Shane into custody and be brought somewhere they would question him of the Pastor killing himself along with the 11 other founding members. Rudy watched the video feed of Sheriff Forbes questioning Professor Atticus Shane, then Bonnie came to see her father and asked him why he had Shane arrested. He told his daughter that Shane is responsible for manipulating Pastor Young to kill himself along with the other 11 founding members, and told her that Shane confirmed it to Rebekah, who told April, who told him. Bonnie then asked her father for a few moments alone with Shane, which he accepted. When Bonnie began using her Expression magic on Shane, he rushed to the room and tried to convince his daughter to stop, but was unsuccessful and told Shane to convince her which he did. Shane told Rudy that with his guidance, his daughter would become the most powerful witch in the world, but without it, she would become a time bomb. Rudy later had a talk with his daughter about her losing control over her powers and that she needed help with it and told her she needed it even more when she said she was fine.

In A View to a Kill, he was confronted by his daughter over the phone for apparently having dumped vervain into the towns water supply. He has apparently been establishing several new anti-vampire protocols, like cancelling town events, much to Bonnie's chagrin.

In Graduation, he handed out the diplomas to the seniors who graduated including his own daughter.

In I Know What You Did Last Summer, he was still unaware of Bonnie's death that happened before Graduation, but believed she was at the Grand Canyon. He was killed by Silas, posing as Stefan, and Bonnie, unseen population of Mystic Falls, screamed over his body in horror.

Rudy was an African American in his early 40s. He had a tall stature and slim build, with black, shaved hair and brown eyes.

The relationship between Bonnie and Rudy was first shown in After School Special. Upon becoming the new mayor of Mystic Falls, Rudy has made it his priority to protect Bonnie, much to her disapproval, and thought that she was in need of help with controlling her magic. Though despite their rough patches in the past episodes, they loved each other unconditionally and it appeared as though Rudy feared losing Bonnie to magic, like he had lost Abby. 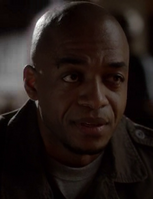 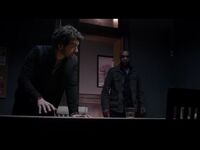