THE SALVATORE SCHOOL PRESENTS "SALVATORE: THE MUSICAL" — The students prepare to put on a musical about the founding of the Salvatore School at the behest of their mysterious new guidance counselor. Meanwhile, as Landon throws himself into writing the musical and Lizzie, Josie, Kaleb and Jed dive into their roles, Hope distances herself from the musical.[2]

Hope sits in the new guidance councillors office to discuss her behaviour over the last couple of days post-breakup with Landon. When he asks about the attack against Jed during the dodgeball game in the gym, she refers to her behaviour as an accident, but is not sorry about her outburst of magical energy when she caught numerous students laughing at the historic entries about her father, Klaus. Moments later, Hope is surprised when Landon enters the room, and Dr. Goodfellow remarks that it is good to have a discussion as the three of them — Hope remarks that they can't have a couples session without the couple, but Landon tells her that he didn't walk away from their relationship. Following this, Hope tries to leave to continue tracking the monster she tracked to the office, but it becomes clear that Dr. Goodfellow is the monster, but is able to convince Hope otherwise through simple suggestive sentences.

Hope bumps into Landon once more in the hallway, wherein he shows her a poster for a musical he is hosting, titled "Salvatore: The Musical!". He explains to Hope that the musical is based on the founding of the Salvatore Boarding School for the Young & Gifted, therefore he needs her help given he knew most, if not all, of the characters involved in real life. Hope becomes angry, remarking that she is not a character in their story and she will not allow her family to be involved in such.

Meanwhile, MG talks with Kaleb, who is getting ready to attend auditions for the musical. As he leaves, Alyssa appears to MG, citing that she is astral projecting. She tells MG that she is still on the Necromancer's side, but could not bare to see MG hurt; she tells him of a monster the Necromancer has sent to the school to distract them whilst he plans his move. Alyssa warns MG not to be a hero and to escape whilst he still can, given nobody at the school will believe who the monster is, even if he figures it out.

During the practices for the show, Josie complains to Landon that she doesn't feel the story is heading in the right direction, particularly surrounding the ending and what it means for Elena. Josie makes a remark about him walking away from Hope twice to show that love is not eternal, much to his surprise. When Landon suggests that they run lines for Caroline's part, Lizzie freezes and leaves the room with haste.

In the library, meanwhile, Landon tries to work on the ending of the musical once more, but finds himself stuck with the complexities of the Sirens and Bonnie Bennett's numerous disappearances. His stress it witnessed by Dr. Goodfellow who suggests that eventually he will figure things out. Following this, Landon asks Hope if she is alright, and she rebukes him, citing that she trusted him with her father's letter and he used it as a song lyric; Landon seems unable to see the issue with this.

The musical begins and is a huge hit for the students of the Salvatore Boarding School for the Young & Gifted. The musical tells the story of Mystic Falls, and the deaths of Miranda and Grayson Gilbert and Elena's life following this, with the tensions between the infamous Salvatore brother's, Stefan and Damon. The audience is receptive of the piece, but Hope refuses to watch, instead remains in her room throughout the production.

During the break, Josie talks with Dr. Goodfellow about how well the show is doing, but is surprised when he grabs her arm and apologises before snapping the bone. Josie is unable to perform further in the musical, but everyone is surprised when Hope arrives and is convinced by Dr. Goodfellow to perform in the musical. Hope is successful in her portrayal of Elena and manages to tell Landon that she loves him and their argument was silly.

Meanwhile, MG tries once more to confront Dr. Goodfellow, but has trouble with his actions and is unable to successfully confront him. He tries to handcuff himself to Dr. Goodfellow but finds this futile given the latter's magical abilities.

Josie and Jade talk as Jade uses a magical healing spell to fix her arm. Jade tells Josie that perhaps the Salvatore School is no longer the place for her and she needs to explore life outside of the four walls. It is with this that Jade tells Josie that she is leaving the Salvatore School and all of the prior memories behind to work on herself. Josie remarks that it would be a shame if she didn't get to kiss her once before she left and the two kiss.

Lizzie reads a letter sent by Caroline. Inside, Caroline tells Lizzie that there is no defining moment in life, nor was her transition her defining moment, but that life happens when you least expect it, and is more than likely already happening.

Landon and Hope talk by the lake and the two apologises for their behaviour, with Landon remarking that Rafael's leaving is hitting him harden than he thought it would. The two reconcile their relationship and it seems that the two are back together.

MG arrives at the Salvatore Crypt to rescue Alyssa, but finds the whole situation a set up by Alyssa. MG is knocked out and taken a prisoner by Alyssa and the Necromancer. 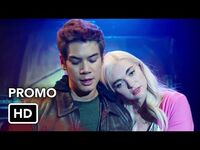 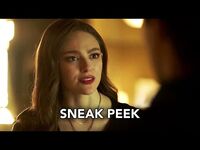 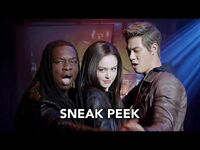 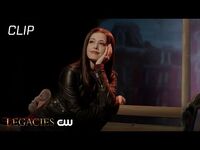 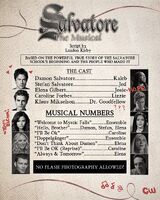 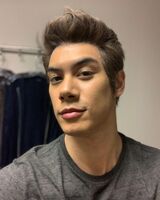 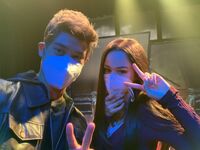 Retrieved from "https://vampirediaries.fandom.com/wiki/Salvatore:_The_Musical!?oldid=2787840"
Community content is available under CC-BY-SA unless otherwise noted.