The Vampire Diaries Wiki
Register
Don't have an account?
Sign In
Advertisement
in: Characters, Guest Characters, Female Characters,
and 8 more

Samantha Gilbert was a character who appeared in the sixteenth episode of the third season in The Vampire Diaries. She was one of the town's founding family members and appears in flashbacks in the episode 1912. Samantha was also in possession of one of the Gilbert Rings.

Samantha was a member of the Gilbert Family.

She was the granddaughter of Johnathan, and inherited one of his rings, which prevented her from dying of supernatural causes. After being revived a few times, Samantha started growing a dark ego and went on to kill members of the Founding Council.

She confesses to the murders and gets locked up in an asylum. She tried to do a lobotomy on herself with a knitting needle and bled to death, finally dying for a final time due to it not being caused by something supernatural.

Samantha Gilbert was the granddaughter of Johnathan Gilbert and inherited one of his rings that prevented the user from dying via supernatural causes. She was first seen at Zachariah Salvatore's funeral where, along with Marianna Lockwood, she met Stefan. She then told him that Zachariah was murdered despite Marianna's attempts to convince her otherwise.

It was later revealed that Samantha was actually Zachariah's murderer and was the other founding family members murderer too in 1912. Although never caught, she confessed in 1922 and was locked up in an asylum, though this was not public information. Later, she tried to do a lobotomy on herself with a knitting needle and bled to death. Damon Salvatore thought he had killed her back in 1912, until he learned this information in the present day, realizing she was wearing one of Johnathan Gilbert's rings.

Much like her grandfather, she kept a journal in which she exposed the fact that she had no idea what she was doing when the murders were committed and, reading between the lines, Elena and the Salvatores figured out that she had committed the murders while wearing the Gilbert ring, just as Alaric Saltzman was and he was the main suspect in the murders that had been occurring against the Founding Family members in 2010. Specifically, just like Samantha, he suffered from blackouts (that he had originally attributed to alcohol) at the time of the murders.

Samantha was polite and had a mind of her own. Despite Marianna's attempts at convincing her of Zachariah's death, she firmly believed he was murdered.

Samantha was a beautiful, young woman with dark, brown hair and brown eyes.

Samantha: (To Stefan) "Be careful Mr Salvatore. It's not a good time to be a founder in this town."

Samantha: "I don't feel like myself. I am losing time... As though I am going mad. (Voiceover from one of Samantha's Diary entries.) 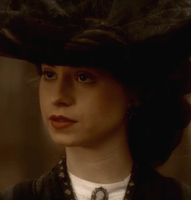