HOME FOR CHRISTMAS — When a dangerous affliction threatens to expose one of her siblings, Freya searches for a way to reverse the crippling curse even as she finds herself the target of The Strix's latest plan. Elsewhere, Klaus keeps a watchful eye over Cami while she attempts to help Detective Kinney, whose life has begun to spiral out of control as a result of Lucien's compulsion. Meanwhile, a confrontation with Marcel causes Vincent to reevaluate his decision to stay out of witch business, and Hayley's attempt at a quiet Christmas with Jackson and Hope results in an unexpected surprise. Elijah also appears.

The episode opens with Rebekah narrating. Marcel had once asked her what it was like being daggered—a deep, dreamless sleep. But the dagger Aya used on her is unique; it ensures she feels the cold, her hunger for blood, and the agony of waiting.

A group of men stand over the box with Rebekah's body in it. Elijah "Smith" paid a lot of money to dig it up out of the Gulf, so the man in charge figures it must be worth a fortune. But all they see is Rebekah's corpse. Elijah appears behind them, and tears them all apart. He frees Rebekah from the dagger, and they smile.

The compound is decorated for Christmas. Camille thanks Klaus for letting her stay with them while she recuperates, but gets a text from Vincent about Will Kinney.

Tristan has taken over Marcel's bar. He's impressed with it, as it's a neutral place where magic is useless and should do nicely until the Strix can install a new Regent among the witches. Tristan has already found a candidate, Van Nguyen. With his mother gone, Tristan made him an offer with which Van wouldn't be able to say "no."

Vincent tells Camille that Will got fired, from being M.I.A., when he's supposed to be on duty and then gaping holes in his reports, arrests he can't explain and missing evidence. Will is isolating himself, not going out of his house or even taking Vincent's phone calls. Camille agrees to make a house call.

Hayley visits Jackson in the bayou. He's still upset with her and about the Mikaelsons, explaining he didn't come home because it's the apartment Elijah compelled someone to give to them and has a bedroom that looks into Elijah's library. Hayley tells him that while her feelings for Elijah are complicated, it doesn't mean she loves Jackson less, and would choose Jackson every time over and over again. She wants to spend Christmas with him and Hope, as a family. Just the three of them.

Aurora wants the Mikaelsons sealed away as soon as possible, but Tristan assures her that soon, he'll have the Serratura again and will make sure Freya, the only witch willing to protect them, will be dealt with.

At a gas station, Rebekah comes out wearing fresh clothes. She's angry, because she's been staked by his ex (Aya) and Klaus's former love (Aurora.) Suddenly, her veins become visible and she talks about wanting to rip Klaus's heart out and seeing how long it'll take for it to grow back. She returns to normal, but her wrist has a mark on it. She's been infected with a curse, from the stake.

Jackson sees Freya being followed, and hesitates to help her and not get mixed up in Mikaelson drama. But just as she's about to be killed, Jackson kills the vampires. One vampire escapes, with the Serratura.

Klaus shows up at Will's house with Camille, much to her dismay because she can handle herself with Will. He doesn't answer the door, but Klaus hears a heartbeat. He breaks open the door, although unable to come inside, and they see he has a gun to his head. Will's words about his worthlessness are similar to what Lucien compelled him to believe, and Klaus asks Will to invite him in.

Hayley returns to the compound, just as Hayley sets down Freya on the couch in the compound. Freya heals with Hayley's blood. She tells them she was meeting with the witch from the bloodline who built the Serratura, but it can't be destroyed. The only way to get rid of it is to use it. Elijah returns with Rebekah, saying they have a more urgent problem.

Vincent is in Marcel's gym, clearing his mind. Marcel is upset with him, because Van Nguyen, whose family business got shut down, can't put food in the table for his sisters, and just got 50,000 dollars from Tristan. The soon-to-be Regent will have a debt to The Strix. But Vincent will now have blood on his hands because he sat back and let it happen instead of becoming Regent himself. Vincent uses his magic, and electricity flies around, and decides that he'll start using his powers again and take back the Regency, but Marcel won't like what he'll do with it.

At Will's home, Klaus tells Will that there's beauty in those who persevere despite all they've been through and believe there's good in the world; those with darkness often find they need that light the most. Klaus then compels Will to believe that everything he doesn't see in himself, others see, and that he does matter. Since it's Christmas, he encourages Will to go to his sister.

The curse will turn Rebekah into a relentless, unstoppable ripper. Freya finds the curse written on the stake, but she'll need a lot of magic to reverse it, and then she faints. Hayley's blood healed her, but Freya was infected with a poison.

Elijah makes some calls to get the cure. For Rebekah's mark on her arm, Hayley goes to get a pure silver knife and Jackson will hunt down white muskroot. Since Freya is too weak, she'll channel Finn, to which Rebekah says sarcastically that the black sheep of the family is just waiting to help.

Finn tells Freya it's not worth it. To let Rebekah die. Klaus tells Elijah he doesn't need the recipe, he knows where to get the cure—Lucien's penthouse.

Rebekah's curse starts up again. She tells Hayley that she doesn't mind the family drama when she needs something from them; or when she's unhappy and looks for someone to blame, the Mikaelsons are the enemy; the last time they spoke, Hayley planned on taking Hope away forever, and asks if she's been a foe all along. They fight, but Rebekah has the upper hand.

Finn helps just this once, for Freya. Elijah tries to stop Rebekah, but even he's no match for her. She nearly rips Hayley's heart out, but Klaus stops her. Camille gives the briefcase with the antidote to Hayley, who brings it to Jackson. Jackson plunges the antidote into Freya's heart.

Freya cuts the mark off Rebekah's skin, and she passes out before awakening as if she had a hangover.

Hayley apologizes for not giving Hope and Jackson the Christmas she planned, but Jackson tells her to not worry, and he leads her downstairs to have Christmas with everyone.

Since the Trinity need to believe Rebekah is still lost, she decides to leave. But not before encouraging Klaus to be with Camille, since he has feelings for her.

Tristan says Van has been rejected by the Ancestors in favor of Vincent, whom Tristan knows had once been inhabited by Finn Mikaelson. He visits Vincent, and even though Vincent stands up to Tristan, Tristan threatens to put Finn's spirit back in him.

Elijah meets Rebekah, who reveals the curse is back. She begs him to dagger her, and to not tell Klaus either.

Klaus and Camille make out, but he later wakes up to see her bloody body.

Freya (to Rebekah): "The stake was cursed. As this mark grows, you'll go mad."

Elijah (to Rebekah): "Control yourself."

Freya (to Rebekah): "The stake was cursed."

Elijah (to Rebekah): "Control yourself."

Camille (to Attendant): "Did they like... pay you?"
Klaus: "Handsomely, and with a generous Christmas bonus. Isn't that right?"
Camille: "So you just compel her to nod and agree with whatever you say."
Klaus: "I compel her to feed me and to hang the occasional Christmas ornament. She can say whatever the hell she wants. You seem better."
Camille: "Thank you for letting me stay here for the past couple of days...and giving me space to not talk. Why didn't you go with Elijah to help Rebekah? I hope it's not to stay and babysit me."
Klaus: "It's not a good idea for he and I to spend hours together in confined spaces: Given that the prophecy foretells one family member felling another."
Camille: "You don't think he would hurt you."
Klaus: "I don't know what to think."

Aurora: "How many days has it been?"
Tristan: "Please go relax. I'll be up shortly with your next dose."
Aurora: "No!"
Tristan: "Let's try to avoid another episode."
Aurora: "No. No! I will not relax until Niklaus is buried alive! We need to get back the Serratura and lock them all away in a pit of fire!"
Tristan: "It's being taken care of, darling. Here. The sister has been researching the medallion since it's been in the Mikaelsons' possession. By end of day, we'll have what's ours, and we'll have taken care of the only witch willing to protect them."

Elijah (to Freya and Hayley):  "Do I need to remind you that because of your beloved hero, Tristan is free, Rebekah is lost...This prophecy threatens to devour us still."

Freya (to Rebekah): "Aya's stake was cursed. It infected you. As this mark grows, you'll go mad."

Aurora (to Tristan): "We need to get back the Serratura and lock them all away in a pit of fire!"

Hayley: "I know you needed space, Jack... But I kind of eventually thought you would come home."
Jackson: "Right. To the apartment Elijah compelled somebody to rent us, and the bedroom that looks in on his library."

"You, Me And A Christmas Tree" – Elise Legrow

"Angels We Have Heard On High" – Bad Cactus Brass Band

The Originals Savior Trailer The CW

The Originals Savior Scene The CW

The Originals Inside Savior The CW-3 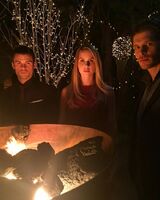 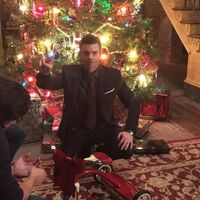 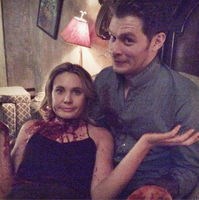 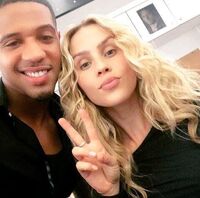 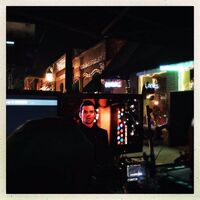 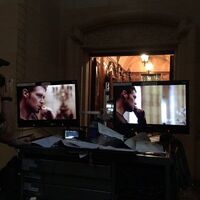 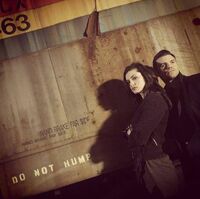 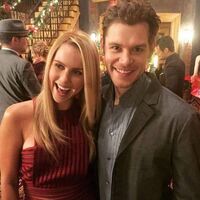 Retrieved from "https://vampirediaries.fandom.com/wiki/Savior?oldid=2785449"
Community content is available under CC-BY-SA unless otherwise noted.