Ex-Lovers, Former Allies; They were in love for over 2,000 years, They betrayed Qetsiyah (Silas' Ex-fiancée) together by stealing the immortality potion she created for themselves so that way they can live together forever.

Ex-Lovers, Former Allies; Separated (Silas was sent to hell before its destruction and Amara had found peace)

The relationship between the former Immortals, Silas and Amara.

Silas and Amara's tragic love story dates all the way back some time between 5th century B.C. and 1st century B.C., in the Ancient Greece. Silas was a young, powerful, and gifted witch, and also was a member of "The Travelers." Amara was a human poor girl who was a handmaiden for Qetsiyah, who was also a powerful witch, and a member of "The Travelers", alongside Silas. She was also Bonnie's very distant ancestor. Although Silas and Amara loved each other, their love was highly forbidden, as Silas was engaged to be married to Qetsiyah. Not only this, but their social statuses were strongly incompatible as Silas was a wealthy young man who was a noble and Amara was a poor girl who was a servant and a handmaiden. Due to the circumstances, the relationship between Silas and Amara was kept in secret.

Silas convinced her to create a potion, for them to drink on their wedding day. That way they could be immortal and live together, forever. Silas only pretended to be in love with her, so that he could get the potion for himself and his true love, Amara. On their wedding day, Silas didn't show up. Qetsiyah realized that something was wrong when the flower she was holding, died in her hands. After that, she knew the potion had already been consumed. She soon discovered that Silas and Amara were the guilty party. She went searching for them and spotted them in the woods.

Qetsiyah, then elaborated her own revenge. She created the Cure and lied to Silas, telling him that there were two of them, when, actually there was only one. She also claimed to have force-fed Amara one of them, turning her back into a mortal, so she could kill her. Then, Qetsiyah pulled out "Amara's heart". Silas, now mortified, heart broken and furious, thought it was true. Qetsiyah, overpowered him, and entombed him, hoping that he would take the Cure, die, and get stuck on the Other Side with her. The truth was, Qetsiyah didn't kill Amara, but made her the anchor to the Other Side. She was a something that would last forever, and something that Silas couldn't destroy.

In Handle with Care, Silas finds Amara after reading Qetsiyah's mind. The anchor was not an object, but instead was a person, with said person being Amara. It turns out that Qetsiyah had never killed Amara in the first place and instead, she just hid her away from Silas out of anger and revenge so that he could never be with her again. When Silas discovers Amara once again for the first time after 2,000 years. He is overwhelmed with both joy and shock. Silas uses one of the dead Travelers, that Damon had killed, and feeds the blood of the deceased Traveler to Amara, in order to revive her and break her desiccation, and quench her 2,000 years plus starvation. As Amara begins drinking the blood, the color in her on face appears, as she starts to gain her life back. After she has finished feeding, Amara's eyes open wide implying that she is alive and present again. Amara starts freaking out since she hasn't been alive for two thousand years, due to Qetsiyah starving her, and letting her turn to stone. Amara doesn't know where she is or who she's with. As she realizes it's Silas, she begins to whimper. They embrace each other, she says, "I love you, Silas... I'm sorry." She grabs a shard of glass and cuts it into his neck, letting his blood start to pour out. She bites into him, making it clear that she does not want to live another day. As she drinks his blood, she becomes human again.

In Death and the Maiden, a wounded Silas, picked up Damon's call and broke his promise to resurrect Bonnie. He had a new plan to kill Amara. As Amara became mortal and could be killed, the Other Side would no longer exist; therefore, Amara and him could spend eternity in the afterlife. When Silas knew Qetsiyah's scheme that she would make Bonnie as the replacement for Amara, Silas stopped the ritual and wounded Qetsiyah. Later, he received a call from his doppelgänger - Stefan that he captured Amara as the hostage. Stefan successfully lured him out. In the woods, Silas found Amara tied to a tree. Amara told him that she wanted to die and Silas understood her decision. As Silas was cutting Amara's throat, Stefan intervened and they had a fight and he dropped his knife. Stefan threw the knife into Silas' chest, killing him. Silas was trapped in the Other Side with Tessa, while Amara died as human & found eternal peace.

Silas and Amara's last moment together 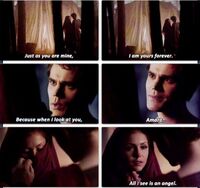 Retrieved from "https://vampirediaries.fandom.com/wiki/Silas_and_Amara?oldid=2778672"
Community content is available under CC-BY-SA unless otherwise noted.