Slater was a vampire who first appeared in the ninth episode of the second season of The Vampire Diaries. He was a friend of Rose and Trevor, as well as Alice's former boyfriend. Slater contacted someone, on craigslist, who contacted a few other people who knew Elijah.

Not much is known about Slater's life before he met Damon, but it is known that he was turned in 1974. Afterwards, he went on to studying for the next few decades, earning himself 18 degrees, 3 masters, and 4 PhDs. He also made it possible to learn as much information on vampirism which is why he was a useful resource candidate to Damon.

In Katerina, when Rose wanted to contact Klaus, she used him. When Damon "staked" Elijah, they didn't know another way to contact Klaus, so Damon and Rose looked him up. He ran a café that had large windows protected with a special UV filter that allowed vampires to stay safely behind them and not burn in the sun. Slater confirms to them that the Sun and Moon Curse supposedly placed on the Vampire and Werewolf races, respectively, can indeed by undone by unbinding the spell from the moonstone; with the only catch being whichever one of the two species succeeds at breaking their respective curse first, then their rival race would  be permanently stuck with theirs. This was presumably why Elijah is trying to unbind the Sun Curse, to keep the werewolves from turning at will. Elijah came by the outside of the restaurant and threw coins to smash the window, burning several vampires. Later, Elijah compelled Slater to call Rose and tell her that the curse can be lifted by using the moonstone before compelling Slater to stab himself, therefore, killing himself.

In The Sacrifice, a few days later, Elena, Rose and Slater's human girlfriend found his body. Rose checked out his computer and found that all of the data had been erased by Elijah, but Alice showed her that Slater kept a copy of all his files in another hard drive and they were able to find the name of Cody.

Slater had a friendly personality, unlike some other vampires. He also seemed to be very intelligent and had a vast knowledge of different topics, things some vampires his age were unaware of, making him a reliable source of information regarding the supernatural world. He also seemed to have a deep respect for humans as he had gone to college for the past few decades as well as having been dating a human, Alice.

Slater was an attractive vampire with short brown hair, blue eyes and some slight facial hair. He wore a red shirt with a dark colored hoodie with long sleeves.

Slater possessed all the standard powers and abilities of a non-Original vampire.

Slater had all the typical weaknesses of a non-Original vampire.

Slater: "Trevor was a good man. Helped me with my dissertation on sexual deviance in the Baroque period. I was going for my psych PhD."
Rose-Marie: "Slate's been in college since '74"
Slater: "When I was turned. I have 18 degrees, 3 masters and 4 PhD's."
Damon: "The point?"
Slater: "Exactly, I mean, what is the point? What should I be doing with my eternity? If you have an answer, please enlighten me." 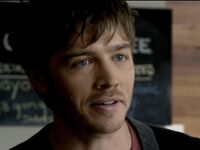