WELCOME BACK SENIORS — On the first day of their senior year, Elena, Caroline, Bonnie and Matt are still reeling from recent events, while Tyler seems to be enjoying everything a little too much. Damon is annoyed by a new house-guest, and everyone is surprised by the arrival of a new student in Alaric's history class. Matt asks Bonnie for help when he realizes he made a serious mistake. Meanwhile, Stefan continues to carry out his latest assignment from Klaus.

Elena's getting a lesson in vampire slaying from Alaric. Ric is confident that she'll learn the ropes. Then it's time for the first day of senior year. As she stands outside the school's entrance, Elena is tortured by memories of how she and Stefan met on the first day of school the previous year. And soon, she's antagonized by the Ripper himself. Stefan — who now spends his time compelling giggling girls to play games of Twister before feeding off of them — tells Elena that he'll be watching her on Klaus's orders, as she's Klaus human blood bag. To make matters even more complicated, Rebekah has enrolled at Mystic Falls High as well.

She's also living with the Salvatores now. Meanwhile, Vicki tells Matt that there may be a way for him to help bring her back, and he agrees to do what he can. Jeremy catches wind of this and brings news of it to Anna, who notes that if Vicki has a strong enough anchor in the world of the living, she might be able to cross over for good. Of course, there'd be a nasty price to pay for this. Bonnie gets angry when she discovers Jeremy has been talking to Anna rather than her about Vicki's plot.

Because Dana was brutally murdered by Stefan last episode, there's now an opening on the cheerleading squad — which is filled by Rebekah, who snidely informs Caroline that she's joining the team, then reveals that she has it in for the blonde vamp: she wants her spunk, her popularity, and maybe even her boyfriend. Tyler's been acting erratic ever since becoming a hybrid. When he decides he's had enough of football for one afternoon, he compels the coach to end practice early so he and his teammates can go "get drunk" at that night's back-to-school bonfire.

And then, after Caroline tells him he might want to be a little more subtle about his vampirism, he watches admiringly as Rebekah performs some stunning feats of gymnastics for an appreciative crowd. Elena heads to the gym, shaken by another encounter with Stefan on the school's track (he called her a "human blood bag"). Damon appears, as he always manages to do when Elena's alone, and she reveals to him that she has a new plan: lock Stefan up until Klaus's spell somehow breaks. Before the bonfire, Elena and everyone else discuss their latest plan. She's going to lure Stefan away so that Alaric can shoot him with tranquilizers. Damon will distract Rebekah with his manly charms. Caroline will prep the old Forbes jail cell so it's ready for Stefan.

All they need now is Tyler's mom's stash of vervain — but when they ask the newborn hybrid for his help, he balks, saying that incarcerating Stefan wouldn't be in Klaus's best interests. With that, Damon realizes that Tyler's been sired —meaning he has a strong loyalty to Klaus, his creator. As a bonfire burns in the woods, a large number of candles burn in Matt's room. He's performing the spell to anchor Vicki to the world of the living, which will also give her the ability to go places Matt isn't.

As luck would have it, the witchcraft works — but there's one hitch. Vicki has made a deal with the original witch: she can't stay in the real world unless she helps restore the world's balance. And the only way to do that is by killing Elena so that Klaus can't make any more hybrids with her blood. At the bonfire, Elena drinks and snarks at Stefan, while Damon walks over to a marshmallow-burning Rebekah and starts flirting. Elena watches stonily, and Stefan notes with delight that she's jealous. She assures him that she isn't and storms off to the bleachers; predictably, he follows her.

After they go, Rebekah coyly tells Damon she knows he's trying to distract her —then, after telling him no fight between the two of them could ever be fair, she stabs him right in the gut.

Stefan approaches Elena on the bleachers, telling her she's drunk and that he'll take her home. She responds by climbing over the railing and taunting him by pretending to fall back — until she actually does fall off the edge. Stefan rushes to the side of the structure, and she careens into his arms.

"I knew you'd catch me," she says. Then, just as he puts her down, Ric shoots Stefan several times in the back.

Elena and Alaric rush to get Stefan in Ric's car as a panicked Matt tells Bonnie that Vicki's out for blood. Vicki manages to use a cigarette to set a trail of gasoline on fire, a trail that leads straight to Ric's car. Elena and Stefan are trapped inside and despite Ric's best efforts, Elena can't manage to get out.

Vicki's ghost waits in the front seat as Elena struggles to escape the burning vehicle. She calls out Stefan's name, and he awakes and kicks the trunk's door clean off. And then Vicki finds herself rudely ripped from the car and back at Matt's side — Bonnie's done a spell to undo the one that made the ghost corporeal. Matt tells his sister he has to let her go and she disappears as the candles flash once more.

Elena manages to get out of the car, finally — but before it explodes, she implores Ric to go back for a still-woozy Stefan. They drag him out just in the nick of time.

Back at the Salvatore's, Damon tends to Elena's wounds. Ric arrives to take her home, but before they leave, Stefan reappears and congratulates them on almost getting the best of him. Then he notes that Elena needs him, because he'll "always protect [her]." Ric and Elena turn to go, but Stefan calls to his former love and asks him why she didn't let him die."Because I still have hope," she says. "I know who you really are. Better than anyone, Stefan. I'm not giving up." His answer is stinging: "Elena. Do you have any idea how pathetic that makes you?""No, Stefan —it makes me strong," she says, before stabbing him squarely in the stomach.

Bonnie isn't speaking to Jeremy because she's mad about his relationship with Anna. As it turns out, she has right to be angry — Jeremy's thinking about Anna nonstop, which results in her being with him almost all the time. His attachment to her is also making her corporeal… just like Vicki.

And while Caroline and Tyler kiss and make up after fighting about his allegiance to Klaus, the next morning Rebekah comes to the hybrid with a surprise — a girl, already bleeding from the neck. It doesn't take much prompting before Tyler's eagerly devouring her.

Katherine managed to awaken Mikael by sprinkling his lips for some human blood. But Mikael doesn't feed off the living, he tells her. "So what do you eat?" she asks right after removing his chains… and right before becoming Mikael's first meal in two decades. And just at the end, Mason appears at the Salvatore Boarding House, breaking vases and finally, attacks Damon.

Stefan: (to Alaric) "You're not gonna want to mess with me."

Elena: "This isn't a joke to me, Ric!"
Alaric: "You think I'm joking? Vampire will take whatever they want. They will hurt whoever they want. And they will do it without remorse. It's their nature."
Elena: "You don't have to use pronouns. You can say Stefan."
Alaric: "Look, I get why you're here. Stefan hurt you. You don't want it to happen again."
Elena: "But you think that I'm crazy to believe that I can protect myself from a vampire who's flipped the switch on his humanity."
Alaric: "I think you found a way to get out of bed this morning. And that makes you the strongest person that I know. I think you can do pretty much anything."

Damon: (to Elena) "No one's going to hurt you. Especially not my brother."

Elena: (to Stefan) "You think I'm going to let a blood addict tell me how to drink?"

Damon: (to Katherine about Mikael) "We need him to kill Klaus so I can de-ripper-fy Stefan before he destroys my house."

Vicki: "I'll be able to come and go as I please, when I want, where I want. I won't have to rely on you."
Matt: "But you'll still be a ghost, Vicki."
Vicki: "In a town full of vampires, werewolves and witches! I'll fit right in."

Caroline: (to Tyler) "Klaus is the bad guy, Tyler. Why are you acting like some freaky, hybrid slave-minion?"

Tyler: (to Caroline) "Everything I like about me is you."

Caroline: (about Tyler) "How do we fix him?"
Damon: "Get a new boyfriend."

Stefan: "Why didn't you let me die?"
Elena: "Because I still have hope. I know who you really are. Better than anyone, Stefan. I'm not giving up."
Stefan: "Elena. Do you have any idea how pathetic that makes you?"
(Elena stabs him in the stomach with the stake-shooter under her sleeve)
Elena: "No, Stefan, it makes me strong." 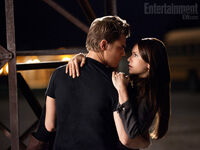 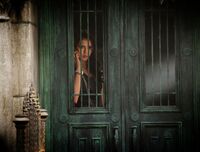 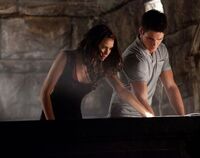 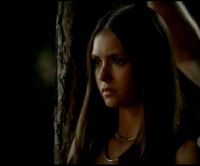 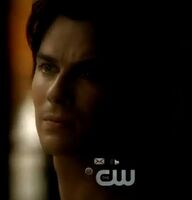 Claire and Candice-behind the scenes