Sophie Deveraux was a witch, and later an Elder, of the French Quarter Coven who was also a former antagonist and a former main character on The Originals. In the past, she was a light-hearted girl who enjoyed partying and didn't care much for witchcraft. However, eight months before the start of the series, she watched helplessly as her niece, Monique Deveraux, was sacrificed in the Harvest, a sacrificial ritual that strengthens the connection between the living witches of New Orleans and their ancestors, from whom they draw their magical power. Sophie had not believed in the power of the ritual, likening it to a Biblical story like Noah's Ark and generally regarding the ceremony as an act of barbaric violence.

However, after watching her niece be sacrificed during the proceedings, Sophie latched onto the hope that the Harvest was real and Monique could come back if the ritual was finally completed. With this goal in mind, Sophie finally began devoting herself to the cause, becoming more serious about her magic and plotting to finally capture the lone surviving Harvest witch, Davina Claire, so that she could complete the ritual and bring her niece back from the dead. Sophie made it clear that she would do whatever it took to reach her goal, which made her dangerous to have as an enemy.

In Après Moi, Le Déluge, Sophie became an Elder with the Mikaelsons' help and unknowingly performed the rest of the ritual, which, unbeknownst to anyone else, allowed Céleste Dubois to bring back three powerful dead witches to serve her own agenda. Each of the older witches resurrected by Céleste, including Céleste herself, took the place of the four Harvest witches who were intended to come back following the completion of the ritual, devastating Sophie and sending her on a self-destructive path of excessive alcohol consumption and meaningless sex to cope with having failed her mission.

In Crescent City, after the death of Papa Tunde caused Monique to finally return to life, Sophie was finally reunited with her niece for a brief amount of time. However, once Monique realized that Sophie still lacked faith in the coven and the ancestral magic that they practice, she killed Sophie with a death hex on the Ancestors orders.

Sophie was a member of the Deveraux Family.

Sophie had a strict upbringing and became an aunt to Monique while she was in grade school. Sophie left New Orleans to see the world when she was twenty-one. She eventually returned to work at Rousseau's as she wanted to become a chef, and began a casual relationship with Marcel. Sophie was told about the Harvest but was skeptical of its authenticity. She shared her doubts with Marcel, unaware that he already had an agenda to prevent the ritual. Sophie arrived late and attempted to stop the proceedings, but could only look on helplessly as her niece Monique was the third to be sacrificed. Sophie saw the fourth girl, Davina, receive the combined power of the three girls who had been sacrificed before her. She then witnessed Marcel taking Davina away from the ritual proceedings.

The result of Davina's alliance with Marcel gave him power over the witches, and he banned them all from using their magic by using Davina's ability to sense magic to enforce his rule. Sophie and Jane-Anne devised a plan to retrieve Davina from Marcel to complete the Harvest, under the belief that only then all four girls could be brought back to life.

At the beginning of The Originals timeline, Sophie met Hayley Marshall. Sophie quickly sensed that Hayley was pregnant with Hope, and she realized that Klaus is the father. Since Klaus has previously ruled over New Orleans for years, Sophie decided she could use his unborn child as her leverage to get him to help her. Klaus was lured back into the city, and Sophie's sister Jane-Anne was killed by Marcel when Klaus expressed interest in speaking with her. After the delayed completion of The Harvest, Sophie eventually got Monique back after a year of desperation. However, her niece did not forgive Sophie for losing her faith and initially doubting the power of The Harvest. In the end, Monique killed Sophie for her skepticism.

In The Originals, Sophie observes her sister, Jane-Anne, interacting with Hayley at the restaurant they both work at in New Orleans. Later, Jane-Anne and Sophie travel to a cemetery where Jane-Anne intends to perform a spell. Sophie is reluctant to allow her sister to do the spell, as Witches have been prohibited from using magic by Marcel, but Jane-Anne reassures her and they proceed. While Jane-Anne performs the spell in the cemetery that night, Sophie, and several others, capture Hayley.

She keeps Hayley for several days until Klaus and Elijah arrive in New Orleans , whence Sophie reveals, first to Elijah and then to Klaus, that she possesses the supernatural gift for detecting when a girl is pregnant, and that Hayley bears Klaus' child. She also reveals her plan for a witches' revolt against Marcel and the vampires that control the city. Klaus refuses to do as she says, but Sophie insists that because Jane-Anne sacrificed herself rather than reveal their plan to Marcel, Hayley and the child's fates rest with the witches. Once Elijah gets Klaus to agree, she explains that the first step is Marcel accepting Klaus into his inner circle.

She also gives Elijah further instructions: Klaus must do all he can to undermine Marcel's rule but above all else, he must keep him alive. She refuses to tell Elijah why because she doesn't trust him yet. She then agrees to release Hayley to Elijah but promises him that, if Klaus double-crosses them, she would kill her. Elijah also makes her a promise: that if anything happens to Hayley or her unborn child, Elijah will make sure the witches pay.

Sophie was described as a leader armed with a sharp tongue and confidence. She was a social force, planting the seeds of a revolution among her peers in the small French Quarter of New Orleans. Her sister Jane-Anne had great confidence in Sophie, stating that she was never wrong. Despite these leadership qualities, Sophie was shown to not be above lying to others to achieve her goals.

In spite of this, she will not hesitate to work with adversaries in order to achieve the greater good.

Sophie was a beautiful young woman in her mid 20s, she had a light complexion with dark brown eyes and hair to match, worn in several different styles; pulled up, curled or straight. She also has a side fringe. In The Originals, she was shown to have lighter brown tips in her hair. She had a slim figure, and looked much like her sister. She had a visible tattoo on her right shoulder, although it is unknown what its significance was or when she got it. Sophie seemed to wear more make-up compared to the other females; she wore black eye-makeup to match her dark eyes and eyebrows. She often wore jewelry such as necklaces, long pendants and a number of bracelets, large earrings and was usually seen wearing tank tops of different color and style, occasionally seen with cardigans or jackets accompanied by jeans and boots.

Despite barely any demonstrations of her power, it can be assumed Sophie was a powerful witch, as the rest of her coven was. She took the lead over the coven in critical times, giving further indication that she was a powerful witch. The first spell she performed on-screen was the one that linked her life to Hayley's, as well as confirming the father of Hayley's child is Klaus, together with her sister Jane-Anne. Despite her negative opinion about witchcraft in general, she did show a great amount of knowledge about it. She also knew a lot of methods related to both witchcraft and old medicine, proved as she always knew which herbs to use in specific situations. This was probably the only way to actually use something similar to magic and go around Marcel's prohibition of magic.

She was also good at performing numerous locating spells and could call upon the ancestors without the need to say a prayer at all, unlike Genevieve and Monique. Despite being a witch though, Sophie could never use her power for defense, due to the dangers of the prohibition of magic placed upon her coven. Instead, she used martial arts to defend herself when needed. She also had a special gift as a witch, the ability to feel if a woman is pregnant, which helped with Hayley's situation a lot. She also claimed, that, as a descendant of the witch who placed the curse on the werewolves, she could reverse it. Though, due to that ancestor being possessed by Celeste, it remains unknown if Sophie could actually reverse the curse. The possibility is that she could, considering despite her ancestor being possessed, they still shared the same blood, an important ingredient in determining a witch's power.

Her power increased even more when she became the only living elder at the time (in her coven), one of the most powerful witches in her coven, with the direct link to the ancestors, and access to all of the power filling the earth to which only elders have access to (though it was relatively weak at the time due to the delay of the harvest). What made her an elder of sorts was the fact that she consecrated one of the most powerful witches, Esther to the ground, was made an elder through channeling Esther's magic and added her powers to the ancestral fold. This allowed her to complete the Harvest, which finally released the ancestral power into the earth, however, it was soon hijacked by a powerful witch named Celeste. This, instead of empowering the community as it was supposed to, left them even weaker, bringing them closer to complete disempowerment.

Thus, due to the delay of the Harvest's last stage, the Reaping, (previously performed by Sophie only to be hijacked by Celeste), Sophie's power, despite being the only elder alive, with the rest of the witches weakened incredibly, demonstrated when Marcel, in desperate need of her help asked for a locating spell, yet there was so little power left in the earth, that Sophie could barely even channel it anymore, as it was previously jacked by Céleste. This proved to be her downfall as she wasn't able to defend herself from her niece, who returned as a powerful witch from the dead due to the harvest. Her most powerful feat so far, however, was the completion of the Harvest, a powerful spell that reestablished the connection between the living and the dead of the witch community and empowered hundreds of witches with ancestral magic. She had also performed the Reaping (the last stage of the Harvest in which the sacrificed are resurrected), however, it was manipulated into resurrecting 3 other witches instead of the Harvest Girls, much to Sophie's dismay, leaving her to believe that she had actually failed the ritual, without knowing that it was actually hijacked.

Sophie also possessed limited psychic abilities, having the gift of being able to detect a pregnancy, which is how she figured out Hayley was pregnant. Eva also mentioned that Sophie was the one who revealed her pregnancy to her through her gift.

Sophie had the typical weaknesses of a witch. 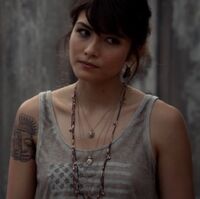 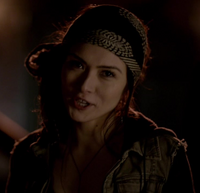 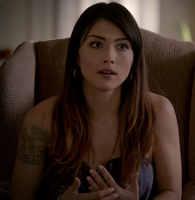 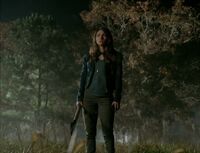 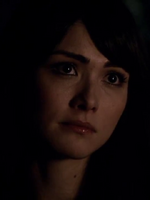 Retrieved from "https://vampirediaries.fandom.com/wiki/Sophie_Deveraux?oldid=2780966"
Community content is available under CC-BY-SA unless otherwise noted.