Former Best Friends, Frenemies, Old Friends, Former Allies, Former Enemies; They have known each other for almost a century, Stefan considered Klaus his closest friend back in 1920s, Klaus compelled Stefan to turn his humanity switch off and tried to kill his ex-girlfriend several times.

The relationship between the Original Hybrid, Niklaus Mikaelson and the cured Vampire/Doppelgänger, Stefan Salvatore.

The two first interacted with each other in Chicago at a speakeasy in 1922, while Stefan was in one of his Ripper periods. He met the only female Original Vampire, Rebekah Mikaelson, and they became smitten with each other. Rebekah told her older brother about Stefan and when they first met, Klaus knew about him and indicated that Stefan has funny hair. After Klaus learned that Stefan was a ripper, and since Klaus himself practically had no humanity at all, from the trauma of his father ruining his life in New Orleans a few years back, the two of them turned into good friends, a bond that was so strong that both Klaus and Stefan referred to each other as brothers at one point. Eventually, Mikael found Klaus and Rebekah and they had to flee, leaving Stefan behind. Klaus compelled Stefan to forget their time together. Ninety years later, they met again just before Klaus broke his curse, with Stefan unaware of their past. Later, to save Damon's life, Stefan had to leave Mystic Falls with Klaus. The two spent some time together but after Klaus discovered that Stefan lied to him the whole time, he compelled him to turn off his Humanity Switch. Stefan got his freedom back after Mikael's death and vowed to make Klaus' life a living hell and kill him. But after he failed so many times, and had to team up with Klaus due to the forced circumstances, Stefan eventually came to recognize Klaus as an ally.

They are known as "Klefan" by fans.

Klaus and Stefan first met in Chicago in 1922 when Stefan was a Ripper and dated Klaus' sister Rebekah. In the beginning Klaus did not like Stefan, but this changed when Klaus discovered that Stefan was a Ripper and they became good friends. When Stefan, Klaus, and Rebekah were attacked at a bar by Mikael, with wooden bullets, Klaus knew that they were not safe anymore so he compelled Stefan to forget him and Rebekah. Klaus thanked him for showing him what it was like to have a brother once again, leaving Stefan without any memory of him or his sister.

In Klaus, Stefan and Klaus met again when he was in Alaric Saltzman's body at the Gilbert house. As Stefan stops him from killing Jenna, Klaus tells him that it would be easy for him to take his revenge if Elena tries to stop him from breaking the curse. Stefan screams at Jenna to leave and gets his vampire face on before he beat Klaus unconscious.

In The Sun Also Rises, Stefan tried to change places with Jenna who was turned into a vampire, but Klaus kills her to break his curse and injures Stefan. Klaus tells Elena and Stefan that he doesn't want Stefan dead because he has other plans for him.

In As I Lay Dying, Stefan is looking for Klaus to heal Damon's werewolf bite. Klaus makes a deal with him, showing interest in Stefan. He says that he had heard of Stefan or at least the Stefan who had been a Ripper whenever he lost control of his urges. Wanting the 'talent' that came with being a ripper that Stefan posed, Klaus promised to give him the cure for the werewolf bite; his blood, the blood of a hybrid; if Stefan did everything he asked.

During the treatment, Klaus forces Stefan to drink human blood which caused him to lose control. Satisfied with Stefan's cooperation, Klaus had the cure delivered to Damon and told Stefan that they would be leaving town.

Before they left however, Klaus wanted to make sure that Stefan honored their deal and brought out a human girl whom he bit before letting her go. He also said that he hadn't compelled her to behave since a 'real ripper enjoys the hunt'. Stefan was unable to control himself and he killed the girl. A pleased Klaus then said that they could leave.

In The Devil Inside, Stefan makes fun of Caroline in order to make her feel better about her and Klaus, and so he said that he have no idea what Klaus saw in her, he asks her in humor what was Klaus thinking.

In Moonlight on the Bayou, they're reunited in St. James Infirmary with Stefan seeking safe haven from Rayna Cruz. They caught up with each other on recent events showing they been keep tabs on each other somewhat since they last saw each other. Klaus finds out Stefan is Rayna's latest prey fearful since he clearly recalls what how she nearly destroyed the French Quarter in the 20th century. Klaus sends Stefan out of the city, but changes his mind after a conversation with Caroline on Stefan's left behind cell phone. Klaus kills Rayna temporary and takes Stefan to Freya who Klaus assures him that she will help him.

In A Streetcar Named Desire, Klaus introduces Stefan to Freya, who is instructed to magically conceal Stefan from Rayna Cruz. Freya is shown to be suspicious of Stefan since he's one of Klaus' few "friends." Later, Stefan joins the rescue mission for Elijah & Klaus who were captured by The Strix. He lures Rayna to their headquarters where she kills the majority of the Strix. However he's de-linked from Klaus' sire-line. He leaves at the end of the episode telling Klaus to take care of himself.

Klaus: "Freya, this is Stefan Salvatore, an old friend. One of my trickle-down sirelings. Long story. Stefan, this is Freya, my brand-new older sister. Also a long story. Stefan needs a favor."
Freya: "You're an old friend, are you?"
Stefan: "Well, it kind of depends on your definition."
-- A Streetcar Named Desire 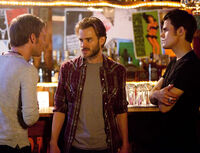 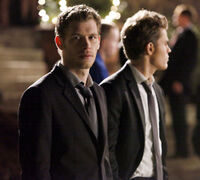 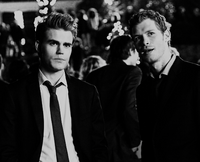 Stefan and Klaus in The Ties That Bind

Klaus and Stefan in Bringing Out The Dead

Dinner for three: Stefan, Rebekah and Klaus discuss The Five

Retrieved from "https://vampirediaries.fandom.com/wiki/Stefan_and_Klaus?oldid=2780978"
Community content is available under CC-BY-SA unless otherwise noted.