Steven Krueger is the American actor who portrays Josh Rosza on The CW's The Originals.

Steven Krueger was born in Appleton, Wisconsin, USA on May 25, 1989. After his parents' divorce, his mother, younger brother, and him moved to Sarasota, FL. Steven started acting while in his new high school. 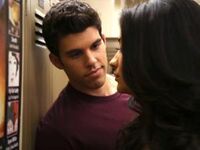 Retrieved from "https://vampirediaries.fandom.com/wiki/Steven_Krueger?oldid=2778686"
Community content is available under CC-BY-SA unless otherwise noted.