Template documentation (for the template shown above, sometimes hidden or invisible)

FA is the driving engine behind the automatic replacement of the Featured episode section of the main page. It looks for a sub-template of this one labelled by the number of the current week, then transcludes that template on the main page. For instance if its April (the fourth month), then this template looks for ,and places it wherever {{FA}} is placed — namely, the main page. 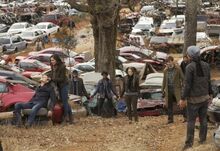 The Travelers are a mysterious millennia-old group of witches who have presumably been transmitting the knowledge of their spells from one generation to another since their emergence around the time of the Roman Empire, in modern Europe. Silas and Qetsiyah were said to be the most powerful members during their time. However, Silas became immortal, rendering him unable to practice magic, and Qetsiyah was later killed by the group for reasons that have yet to be explained. They also kept Amara's body hidden for thousands of years until Qetsiyah came back from The Other Side and located it with her magic.

This template is fully locked, because it is merely the conduit through which the actual Image text passes. To change the Image , you must change one of the following sub templates.

Visit Template:FA/doc to edit this text! (How does this work?)
Retrieved from "https://vampirediaries.fandom.com/wiki/Template:FA?oldid=1151029"
Community content is available under CC-BY-SA unless otherwise noted.
FandomShop Newsletter Join Fan Lab