Template documentation (for the template shown above, sometimes hidden or invisible)

FE is the driving engine behind the automatic replacement of the Featured EPISODE section of the main page. It looks for a sub-template of this one labelled by the number of the current week, then transcludes that template on the main page. For instance if its April (the fourth month), then this template looks for and places it wherever {{FE}} is placed — namely, the main page. 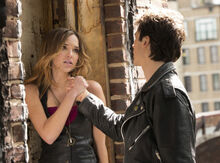 Because the Night is the 17th episode of fourth season. Realizing that Elena needs some time away from Mystic Falls, Damon takes her to New York City, where he lived and partied hard in the 1970s. When Rebekah also shows up in New York, she’s impressed with Elena’s secret agenda. Flashbacks reveal Damon’s hedonistic life in the underground club scene and a complicated encounter with Lexi. Meanwhile, Caroline and Stefan try to convince Klaus that it would be in his own best interest to help them track Silas down, and Bonnie struggles to keep her grasp on reality and doing the right thing for her and her friends in Mystic Falls.

Read more of this article

This template is fully locked, because it is merely the conduit through which the actual Image text passes. To change the Image , you must change one of the following sub templates.

Visit Template:FE/doc to edit this text! (How does this work?)
Retrieved from "https://vampirediaries.fandom.com/wiki/Template:FE?oldid=948941"
Community content is available under CC-BY-SA unless otherwise noted.
FandomShop Newsletter Join Fan Lab