MYSTIC FALLS CELEBRATES COMMONWEALTH DAY / RILEY VOELKEL STARS AS FREYA — When a truth-seeking monster arrives in Mystic Falls during Commonwealth Day, Hope and Lizzie fear that the secrets they've each been keeping have made them targets. Meanwhile, MG, Kaleb and Kym seek out an unlikely ally, who may have knowledge on how to take down the latest monster. Finally, Freya receives an unexpected visit from one of the Salvatore Students. Alaric and Josie also appear.[3]

In New Orleans, Josie sits in Rousseau's, before being approached by Freya, who asks how old she is pretending to be. She introduces herself, and Josie reveals that she's from the Salvatore School, to which Freya reveals that Keelin is looking at the school for their child. When Josie asks for help to reverse engineer a dark magic spell, Freya tells her to go home as those are not the spells she should be messing with. Josie, however, tells Freya that she knows she has forgotten someone, and the only way to remember them is to help her with the spell.

Meanwhile at the Salvatore School, Kaleb has finished giving Kym a tour and shows her the door, hoping that she will return to her hotel, however she asks to be shown the interesting things. Kaleb remarks that there is nothing interesting, however MG and Lizzie enter shortly after with the jogger from earlier, who has now been turned into a zombie-like creature. Lizzie sets him alight, however MG tells her that they need to trap the monster so Malivore doesn't send any more. With this, Kym makes a sarcastic remark that Kaleb wasn't telling the truth.

Alaric is preparing for the Commonwealth Day when Sheriff Mac approaches. He tries to talk with her about standing her up at the Mystic Tap previously, however she gets a call over the radio and has to leave. Also at the preparations are Hope and Ethan, who grow closer, eventually leading to Ethan telling Hope to ask him out if she wants to see him again. Lizzie prods Hope to join her under the table, which is directly over the Malivore portal. Lizzie asks why Hope has not been watching it, as a zombie had sneaked out. However, Hope rebukes her revealing that she has been watching all night and the zombie may not have come from Malivore. Lizzie tells Hope to finish up the preparations so that the two can hang out later, which surprises Hope, but Lizzie reveals that she fears she will blow Hope's secret if she spends any time with Josie. In the distance, Rafael notices that Hope and Lizzie are friends, fearing that Lizzie will tell Hope that the two had sex and perhaps will tarnish his reputation, hereby making it more difficult for him to make a move with Hope.

In New Orleans, Freya and Josie work on reverse-engineering the spell. Freya asks how she learned of the spell, and it is revealed that Lizzie wrote about her memories returning in her journal, inadvertently making this appear in Penelope's journal which is currently in Josie's possession. Freya leaves to take a call from Keelin, however when she returns, she finds Josie looking at a photograph of her and Hope. She questions how they have forgotten the same person, and who the girl is, however Josie blasts her back with dark magic instead of answering and leaves.

In the Woods, Sebastian approaches a hooded figure, intent on feeding on it, however they turn around and it is revealed to be Kym, who sprays Sebastian in the face with vervain before MG and Kaleb arrive, snapping his neck. Kaleb begs for Kym to return home, however she refuses, and MG tells the two that he will take Sebastian to Alaric's office until the Commonwealth Day is over; he reveals to Kym that he made Lizzie think she was going insane, and hasn't told her that Sebastian is actually real.

Outside of the Mystic Grill, the counselor is approached by a new monster from Malivore, who kills him and begins feeding on his body. The next day, Hope and Lizzie check out the murder, having been alerted by Alyssa Chang. They find out that the monster from Malivore is a croatoan, however they are at first confused by this. They bring this up with the rest of the Salvatore group, and Kym is able to offer insight into the background of croatoan's. They formulate a plan, but Kaleb questions why Hope — a Mystic Falls student — is giving them orders. Not wanting to reveal their secret, Lizzie reveals she is a witch. Meanwhile, Josie calls Caroline from a payphone, revealing she can restore everyone's memories, but this could also hurt people.

Having split into groups, Rafael tells Hope that it's nice to get away from the busy areas, and Hope remarks that it must be hard re-adjusting. With this, the two talk about whether Hope is currently seeing anyone, and she reveals she is not. Rafael tells her he isn't afraid of technicalities, however she ignores him, walking off.

Meanwhile, Lizzie lights a candle that keeps out supernatural creatures to protect Landon. Landon asks if Hope is single, which confuses Lizzie but he eventually reveals he is asking for Rafael. She tells Landon that he shouldn't be asking after having sex with Josie, however he reveals the two have not, which surprises Lizzie, but she is also glad and remarks that it changes everything. In order to not reveal Hope's secret, she asks Landon about Star Wars to keep him talking. Not long after, the croatoan enters the school and attacks Lizzie, they are able to fend him off, but it is revealed that actually, the creature is after Lizzie, not Landon.

The monster continues to try to attack Landon and Lizzie, whilst MG and Kym attempt to find out its history. Sebastian awakens and reveals that he knows the history. He gives them a brief run down, and MG relays this to Lizzie. He tells them that the croatoan was summoned by a witch, Cassandra, to find out who was killing the townspeople, therefore it seeks out those with secrets. This explains why it is going after Lizzie, who realizes that only the witch who summoned it can banish it — this poses a problem as she has been dead for over 500 years. The creature continues to follow Lizzie and Landon, with Landon suggesting that Lizzie reveal her secret therefore the monster will stop following them, however she refuses. They eventually manage to trap the monster and Lizzie is about to reveal her secret, however Hope appears, silencing Lizzie before she can speak a word. They run to the gym where Hope is upset with Lizzie for almost telling Landon everything but Lizzie reveals that Josie and Landon didn't have sex. There is still a chance for her and Landon, which surprises Hope, but they're quickly interrupted by the croatoan.

Sheriff Mac questions Alaric over the events that occurred at the Mystic Tap, asking why he was there. Alaric tells her that he was having a drink with Professor Vardemus, which she finds hard to believe. The Sheriff reveals that Alaric has a bad history, including the majority of his girlfriends meeting a sad end, to which Alaric remarks that her husband died too. Alaric provides her with Matt's card, stating that he has an alibi, but also revealing that Matt is the new Mayor of Mystic Falls.

Meanwhile, Sebastian cannot understand why he cannot remember more about Cassandra. He and MG get into an argument over a remark MG makes about feelings and secrets. Back at the Salvatore School, Lizzie and Hope begin revealing secrets to try and fend off the monster, however it doesn't work and Hope finally admits that she is back. At this moment, Josie arrives and casts the spell, returning everyone's memories of Hope. The rush causes them to all faint.

MG awakens, having remembered Hope. As does Sebastian, who has regained his memories. He reveals that Cassandra knew he was a vampire, therefore summoned the croatoan to seek out the truths of the counsel man who wanted Sebastian — although they didn't know he was the monster — gone. She gave Sebastian the necklace he was wearing to protect him from the croatoan, but when he tried to stop her, she desiccated him. He tells MG that he was forced to watch her be torn apart, unable to help her. He gives MG the necklace to save Lizzie, and MG speeds off to deliver it to Hope.

Meanwhile, the croatoan has captured Landon and begins to take him to the portal to Malivore, however they are interrupted by Hope. Landon asks why Hope didn't tell him, and she reveals that she thought he was happy but should talk about it later. MG arrives, handing the two the necklace and Hope is able to de-spell the croatoan, killing it. Hope then turns to talk to Landon but he walks away without saying a word leaving her visibly sadden.

Sheriff Mac returns and tells Alaric that his alibi checks out. The two talk, and Alaric reveals to her that supernatural creatures are real and Mystic Falls has a long history. He asks if she will be the one he can count on to turn a blind eye when need be, however she says she cannot. With this, Alaric has Kaleb compel away Sheriff Mac's memories of the supernatural world.

Meanwhile, Josie is upset that Lizzie kept the memory of Hope from her, but Lizzie is also angry that Josie kept things from her. Josie asks what Lizzie thinks Landon will do with his memories back, but she doesn't know but promises to always be there for her. However, she makes her promise not to keep secrets any more. Sebastian arrives shortly after, agreeing with them on this and Lizzie fears she is having another episode, however Josie says she can see him too. MG appears and tells them that everyone can as Sebastian is real and is about to tell Lizzie the truth.

At the Commonwealth Day celebrations, Rafael tells Hope that they can no longer be around each other as he confesses to her and states he needs to respect her past with Landon, This upsets her, and Rafael leaves. Hope is left saddened and alone until Freya arrives behind her and the two embrace.

Josie and Landon talk about the direction their relationship is heading with regards to Hope, however he says that he doesn't know but needs time.

That night, Ethan goes jogging in the Mystic Falls cemetery. Unbeknownst to him, he's about to be attacked by the zombie until it is grabbed by one of the red hooded figures. The figure then uses the zombie's blood to link the figure's cauldron to the severed eye left behind in the Salvatore school kitchen.

Lizzie Saltzman: "Ok squad, we have a problem."

Rafael Waithe: "I thought Malivore could only release one monster at a time?"
Hope Mikaelson: "Yeah, that's what we all thought."

Freya Mikaelson: "So tell me, how is it we both forgot the same person?"

Ethan: "Hey, I got to head to practice."
Hope Mikaelson: "But you're hurt."
Ethan: "I can still help the team win."
Hope Mikaelson: "Gotcha. See you after?"
Ethan: "Not unless you're coming to physical therapy with me. My life's a real party these days. You ever want to see me, you should probably just ask me out."

Hope Mikaelson: [gasps]
Lizzie Saltzman: "Don't "gah" me. Get your ass under here."

"The Street Of Broken Dreams" – George Grant and the Mighty Templars 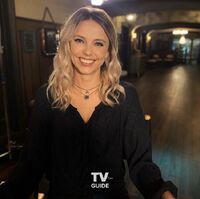 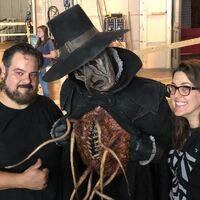 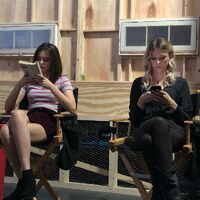 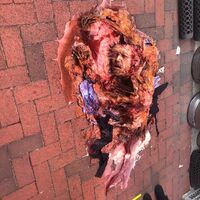 Retrieved from "https://vampirediaries.fandom.com/wiki/That%27s_Nothing_I_Had_to_Remember?oldid=2785542"
Community content is available under CC-BY-SA unless otherwise noted.