The Armory is an organization that specializes in supernatural knowledge and artifacts. It is located in Grove Hill, Virginia, seven miles from Mystic Falls.[1]

Sometime in the 19th century, Enzo's father founded the Armory.

In 1790, Beatrice Bennett trapped the sirens within the caves of the vault after they sirened Ethan Maxwell into ringing the corrupted Maxwell bell and destroyed her coven[2]. The vault inside the headquarters was officially founded by Dalton St. John in 1882. He and his team went inside the vault but Dalton came out a killer, stripped away of all compassion and humanity. In 2014, Virginia St. John forced a Bennett witch to seal the vault with a spell, while her sister Yvette was still inside. Alex, her other sister, needed Bonnie, who's the only known remaining witch of the Bennett bloodline, to open the vault and rescue her sister. Bonnie finally opened it in 2017, only for Alex to find out that Yvette is dead. Later, Bonnie used her magic to trap Alex and other Armory guards inside, alone with the darkness.

In Hold Me, Thrill Me, Kiss Me, Kill Me, Matt calls upon them to take Enzo away, hoping they would keep him locked up.

In Postcards from the Edge, Enzo is seen watching Rayna Cruz burst into flames in a room and she walks towards the door.

In This Woman's Work, Rayna is seen being held captive in the room and Enzo arrives with another person. She punches the door a few times while her knuckles get bloody and she then runs into the door, shattering it into glass.

In Moonlight on the Bayou, Enzo tells Bonnie and Damon about how he's been working with them for four months and how Alex has promised to relay something about his family. He reveals to them since the Phoenix Stone had turned up again, the Armory has been wanting to retrieve it and Rayna. It is also revealed that Tyler had come into contact with them while on one of his hunter trips and this also lead to Matt calling them about Enzo. Valerie relays to Damon that the Armory is a black hole of lies and that they will use Stefan as bait like what they did with Beau. The Armory also go to a store and capture both Mary Louise and Nora.

After reattaching his hand, Enzo confronts Alex and tells her he's done doing things for free. She then tells him that his father had founded the Armory and that they are family.

In I Would for You, Bonnie is introduced to Alex and she shows her the Eight Everlasting. Bonnie tells her that it should be two as the others have decayed. It is soon revealed by Enzo that Rayna's lives are connected to the shamans and that the last one will mean not only the end of Rayna, but the end of the vampires she has marked.

After Bonnie leaves, Alex asks where she went and she tells him that finding Rayna was part of it, but they need Bonnie now.

In One Way or Another, Virginia tells Bonnie that The Armory is built above a vault. The vault was sealed by a Bennett witch, that is the reason why the Armory is interested to find Bonnie. Virginia also shows that she doesn't want what is inside of the vault to get out.

In Somebody That I Used to Know, Alex's team is seen on the campus three years ago, looking for Bonnie on Alex's orders, however, Enzo saves her in time. In present, Alex and Enzo run into one another, with the former still looking for Bonnie and pleading with Enzo to give her over, while promising she'll do everything to save her if she unseals the vault in the Armory. Alex then reveals how her sister Virginia forced Lucy Bennett to seal the vault 4 years ago while their sister was still in the vault. She then killed Lucy.

In Kill 'Em All, Alex makes a deal with Damon and gives him her team which rapidly kills the remaining Phoenix vampires. However, in turn, Damon promises to bring Bonnie to her. Alex also brings in Caroline and Alaric in order to lure Bonnie. She arrives shortly and finally undoes the spell on the vault, opening it. Alex lets Bonnie go and goes into the vault with her team only to find her sister's corpse inside. Suddenly, an invisible force starts killing many members of the Armory and the remaining try to flee.

However, Bonnie then magically traps many of the Armory's members in the building with a boundary spell, in order to keep whatever she unleashed at bay. Later on, the Armory is shown with everyone in it dead except for one member repeatedly banging his head against the wall.

In Requiem for a Dream, Enzo comes up with a plan to infiltrate the Armory alongside Damon, in order to find the remaining shaman, who might be the solution to Bonnie's current state. As the two are having a conversation, images of the Armory are shown, where dozens of corpses can be seen, scattered across the entire building.

In Detoured On Some Random Backwoods Path to Hell, after realizing that the twins needed to be around magic, Caroline and Alaric took Lizzie and Josie to the Armory. While at the Armory, the Twins were confined to a holding cell in an attempt to limit their powers. However, they were still able to use their powers while in the cells to levitate crayons, but could not use them to interact with those outside the cells.

In I Was Feeling Epic, Bonnie casts a powerful spell, with the aid of the Bennett spirits to protect Mystic Falls from hellfire. In the process, the Armory is destroyed by the hellfire as it exits from the tunnels connecting to Mystic Falls. 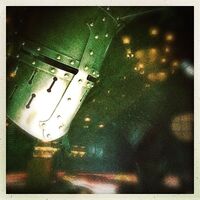 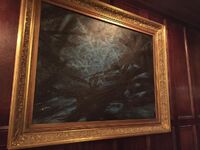