THE FEAST OF THE BLESSINGS - Genevieve asks Elijah to allow her coven to publicly celebrate a traditional feast day, where members of the community offer the witches gifts in return for blessings. Monique and Genevieve disagree over what the ancestors want from them, and Genevieve reveals her plan to build the witches' power. When Elijah focuses his attention on restoring their home to its former glory, Klaus accuses him of doing it only to impress Hayley. Next, Klaus sets a new plan in motion by finding Cary, a werewolf from his own line, and sending him off to find a missing piece of family history. Marcel lets Thierry in on his new plan to rebuild his power, but Diego has his own ideas about the future. At the Feast of the Blessings, Monique and Genevieve try to use the ceremony to teach Davina a lesson, but Klaus intervenes and gives Davina a surprisingly important gift. While Hayley struggles to decide where her loyalties should lie, the ceremony explodes into violence.

Klaus: "I see you've already avenged the little wolf. Judging by your look, you're still out for blood."
Elijah: "If the definition for insanity is doing the same thing repeatedly and expecting different results, then surely my quest for your salvation ranks me as one of the maddest men."
Klaus: "Alright then, what horrible deed has the bastard done this time?"
Elijah: "You know, in the past, I actually appreciated the methods to your manipulations. However, now here we are, poised on the brink of a new era-- which you have brought not only into your home, but to your child-- and, you go behind my back to conspire with the wolves."
Klaus: "'Conspire' is hardly he word I would use for a family council. And let's not forget, Elijah, they are my family as much as any Mikaelson - a name, in truth, I cannot even call my own."
Elijah: "How casually you disavow a thousand years of allegiance towards your family."
Klaus: "And now that I have found the remnants of my other family, am I to ignore their plight? I would have thought you'd support my desire to help them, when in doing so I help Hayley and the child."
Elijah: "Do not question my allegiance towards that child!"
Klaus: "Oh, I suppose your affection for Hayley has nothing to do with your tireless dedication? Yes, you see, I saw how you cared for her tonight, called her name in the dark. The zeal with which you'd destroy those who would harm her."
Elijah: "I have denied every single impulse I have ever had for that woman out of some misbegotten respect for intentions that you don't even have!"
Klaus: "I'm warning you--"
Elijah: "I'm warning you! I've forgiven you, I've stood by you, I have forsaken every single one of my desires in the name of your ridiculous redemption. No more. If I want something, I'll take it. And nothing-- nothing-- will stand in my way."

Klaus: "Enough with all the racket!"
Elijah: "Is there a problem, brother? Gentlemen, please."
Klaus: "I agreed to a general sprucing up, not a bloody three-ring circus."
Elijah: "Marcel and his minions abused our home for a better part of a century. Now, you may be content to live in squalor. I'm not."
Genevieve: "I agree with your brother. It's a new era in the French Quarter, this place could use a makeover."
Klaus: "Be careful, Elijah. When this one agrees with you, it's a sure sign she wants something."
Genevieve: "Actually, I do have a request. I'm told our coven hasn't been able to celebrate feast days since Marcel restricted the use of magic. Now, with the new peace, I'd like that to change."

Thierry: "Exiled from the quarter. Elijah even smells you coming and you're dead."
Marcel: "You don't know them like I do. They have turned against each other already. A thousand years of family drama. Pride, guilt, envy, all built up like a powder keg. All you have to do is light a match."
Thierry: "Then where do we buy matches? Look around Marcel, we have nothing!"
Marcel: "We started with nothing. Hell, things didn't get rolling until I turned you! You, and your music, and the whole city for the taking. Those were the days, T. Let's go get them back!"

"Under The Earth" – Yeah Yeah Yeahs 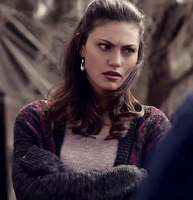 Retrieved from "https://vampirediaries.fandom.com/wiki/The_Big_Uneasy?oldid=2786976"
Community content is available under CC-BY-SA unless otherwise noted.