THE SECRET HERO — Determined to protect his sister, Jeremy makes a decision that will change everything. In the harsh reality of the present situation, Elena longs for the simpler times in her life when her parents Grayson and Miranda and Aunt Jenna were still alive and her biggest concern was her relationship with Matt. Stefan and Damon leave Mystic Falls together on a mission, but soon split up when Elena needs one of them. Caroline and Tyler are forced to make a life-changing decision. Finally, Bonnie makes a secret deal that has heartbreaking consequences.

The episode starts with a flashback, a dream from which Elena wakes up in the hospital. Meredith tells Jeremy it's just a concussion, but Jeremy calls Stefan and Damon anyway, who get mad she's in the hospital because they feel the remaining originals (Rebekah, Kol, Elijah) will be trying to kill her to kill Alaric. Elijah shows up at Elena's house and she makes a deal with him to give him Klaus' body as long as he and his siblings don't harm her or her family in the near future. Jeremy, who was plotting with Matt to get everyone else out of the house so Matt could take Elena out of town, tries to lead Alaric into a trap. But Alaric has other sources, and ends up at the storage facility where Damon hid Klaus' body.

Alaric stakes Klaus' body with the magically reinforced White Oak Stake, leaving everyone to believe Klaus died. Thus, everyone gets all worried they are going to die too because Klaus told Damon and Stefan he created their bloodline. Meanwhile, Damon calls Stefan, convinced that they are about to make their 'epic goodbye'. Stefan expresses regret that Damon can't reach Mystic Falls, so he can say goodbye to Elena. At that moment Jeremy reveals his plan to ferry his sister away, which is met by surprised looks. Matt, who has driven Elena a little bit out of town says he can keep driving her to Damon or turn back and bring her to Stefan. She calls Damon and tells him she's going back, not just for Stefan, but also for Caroline and Tyler. Damon asks if it was just between him and Stefan, who would get the goodbye. Elena tells him: "I love him, Damon. He came into my life at a time when I needed someone and I fell for him instantly. No matter what I feel for you, I never unfell for him." Heartbroken, Damon says goodbye, as Alaric returns.

The enhanced Original beats his former friend badly, and taunts him with not fighting back. Damon replies that he's kind of invincible, and Alaric denies their friendship. For a second, Damon passes out, and his mind flashbacks to a time when he met Elena, for the first time, before Stefan. Coming back to reality, Alaric prepares to kill Damon, once and for all. But charged by his love for Elena, miraculously, Damon manages to hold back the stake Ric tries to slam down into his heart, and throws him off. They start engaging in a vicious battle.

Caroline, meanwhile, rushes to Tyler, whom we know is of Klaus' bloodline. They kiss, embrace, then Tyler tells her to leave; he doesn't want her to watch him die. Caroline resists so Tyler starts to turn in to a werewolf and she runs. Rebekah and Elijah are talking, amazed that Stefan, Damon and Caroline are alive. They said they weren't the ones, nor was Kol to create their bloodline; they were sure it was Klaus. And that's possibly  true. Klaus is still alive.

Bonnie did a spell that has him living in Tyler's body. It's unclear what this means for Tyler, but it's assumed that he's still alive somehow too because Bonnie wouldn't knowingly kill him. Bonnie said she saved Klaus to save her friends and her mom.

Since she believes Klaus is dead, Rebekah tells Stefan that the deal is off; she's tired of running. Rebekah wants to kill Elena so Alaric dies.

Rebekah brings her plan to a head, by standing in front of Matt's car as he's driving Elena back into town. He swerves and the car goes over the bridge into the water, the same accident that played out with Elena's parents.

The scene flashes back to Damon, who has managed to gain the upperhand over Alaric. The Original tries to bring the White Oak stake down, but Damon disarms him and then Alaric suddenly starts collapsing. Real fear showing, Ric grasps Damon and dies in his arms as Elena drowns.

Damon, thinking Elena has been admitted to the hospital, rushes there and Meredith confesses she cheated by giving Elena vampire blood to save her life in the previous episode because she was bleeding from the brain. Meredith did not tell Jeremy this when they earlier discussed Elena's condition. Thus meaning Elena has died with vampire blood in her system and she now awakens in her transition.

Matt: "So, Stefan?"
Elena: "He saved my life, you know. I never told you that. The night that my parents' car went off the bridge, Stefan was the one that saved me."
Matt: "So then, what's the problem?"
Elena: "The problem's Damon. When I'm with him, he just consumes me. And I know that I can't love them both. I know that it's wrong. But, I... When I choose one, then I'll lose the other. And I don't want to lose anyone else. I – I just – I wish that I had my mom here to give me some advice."

Damon: "If it was just down to him and me and you had to make a choice who got the goodbye, who would it be?"
Elena: "I love him, Damon. He came into my life at a time when I needed someone and I fell for him instantly. No matter what I feel for you, I – I never un-fell for him."
Damon: "Yeah, I get it. Stefan, it's always gonna be Stefan."
Elena: " I can't think about always. All I can think about is right now. And I care about you, Damon, which is why I have to let you go. I mean, maybe if you and I had met first..."
Damon Salvatore: "Yeah. Maybe."

Rebekah: "He's gone, Elijah. There was nothing I could do to stop it."

Elijah: (about the Mystic Falls Gang's sireline) "It wasn't me, it wasn't Kol."
Rebekah: "It wasn't me, Elijah. It was Niklaus, I'm sure of it."
Elijah: "Then how are they still alive?"

Elena: "I don't know what I want."
Damon: "Well, that's not true. You want what everybody wants."
Elena: "So, Damon, tell me. What is it that I want?"
Damon: "You want a love that consumes you. You want passion, an adventure, and even a little danger."

Meredith: "You need to know-- when Jeremy brought Elena in here earlier tonight, her injuries were worse than I let on. It wasn't a concussion, it was a cerebral hemorrhage. Bleeding on the brain."
Damon: "What are you saying?"
Meredith: "He was so worried, I didn't wanna tell him but I... I helped her. She needed my help."
Damon: (horrified) "You what?"

Elena looking at her father 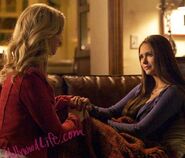 Who could he be talking to?

Elena in her cheerleader dress

Nina, during the rehearsal of the underwater scene of "The Departed." 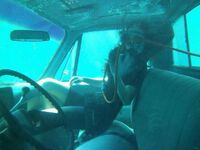 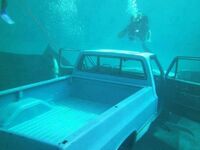 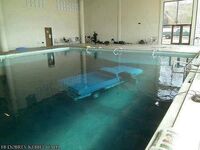 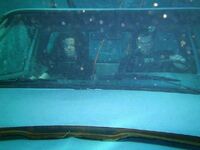 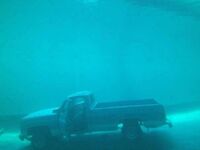 Retrieved from "https://vampirediaries.fandom.com/wiki/The_Departed?oldid=2785670"
Community content is available under CC-BY-SA unless otherwise noted.