STEFAN TELLS ELENA ABOUT HIS DARKEST DAYS - Stefan tells Elena about a dark time in his history and the surprising person whose influence changed everything, and how he's a "ripper." After getting the truth out of Luka, Jonas makes his feelings clear to Bonnie and Jeremy. Trying to catch Elijah off-guard, Damon arranges a dinner party for him with Jenna, Alaric, and Andie, but last-minute information throws Damon's plan into chaos.

Still at her family cabin, Elena reads Johnathan Gilbert's old journals about vampires. Stefan explains that when he first became a vampire, he was out of control from guilt and fear, leading him to turn off his emotions and to behave recklessly.

Elena discovers that Stefan almost killed one of her ancestors, Johnathan Gilbert. She also finds out that Stefan killed two of Johnathan's close friends and family while Damon tried to be the voice of reason. After the tomb vampires are captured, Stefan met Lexi, who calls him stupid and explains that he shouldn't live with his emotions shut off. She says that feelings are amplified for vampires, and although guilt is unbearable, being able to feel will also allow him to love intensely. Stefan explains that Lexi is the one who made him humane again; and Lexi also tried to stop Damon from leaving Mystic Falls, with him asking her to help Stefan.

Back in present time, Damon goes to visit Katherine's tomb. Katherine reveals that it is possible to kill an Original, but begs Damon to not kill Elijah until she figures out a way to get out of the tomb. She explains that if Elijah dies, she'll be compelled to stay in the tomb forever. Damon feels no sympathy for Katherine and plans to kill Elijah at a dinner party.

Stefan goes to warn Alaric. At the party, Alaric stops Damon just in time and surprises everyone by stabbing Elijah. Elijah appears dead, and they put his body in the cellar before Jenna comes back. Unfortunately, Elena discovers that the dagger must stay in the body for the Original to stay dead. When Damon goes back to check on Elijah, he finds that the body is gone.

Elijah flees to the Martin household. Jonas learns that Bonnie knows about Luka's sister. Jonas heads over to the Gilbert's where Bonnie and Jeremy are practicing spells. Jonas threatens them both and strips Bonnie of her powers.

Elijah shows up at the lake house and tells Elena that their deal is off, demanding that Elena comes with him. Elena threatens to turn herself into a vampire, but Elijah calls her bluff. She stabs herself and Elijah realizes that she'll either die or turn into a vampire if Stefan heals her with his blood. Elijah begs her to let him heal her; as Elena moves towards him, she stabs him with the white oak dagger. Elena turns to Damon and Stefan and demand that they tell her everything from now on, and that she's decided to fight, rather than sacrifice herself.

Back at the Salvatore's, Damon sees someone in the shower and assumes it's Andie; however, Katherine steps out from the shower, smugly explaining that when an Original dies, the compulsion wears off. She tells Damon that she wants to help Elena and the brothers.

Elena:  "I'd like to see you lure Klaus into Mystic Falls after the doppelgänger bleeds to death."
Elijah:  "Stefan won't let you die."
Elena:  "No, he won't. He'll feed me his blood to heal me, then I'll kill myself and become a vampire just like Katherine did. So, unless you want that to happen again, promise me the same as before. Promise me that you won't harm anyone that I love, even if they've harmed you."
Elijah:  "I`m sorry, Elena. I`m going to have to call your bluff."
(Elena stabs herself with a knife)
Elijah:  "NO!"
(Elijah vamp-speeds toward the door, but he can't come in because he hasn't been invited)
Elijah:  "Yes, yes you can have your deal. Let me heal you."
Elena:  "Give me your word."
Elijah:  "I give you my word."
(Elena exits the house and heads to Elijah. He hugs her, but she daggers him.)

Lexi:  "Because once you can hurt, you can love. Love, Stefan. That's the point."

Elijah:  "Alaric Saltzman. So, you're one of those people on Elena's list of loved ones to protect?"
Alaric:  "So is Jenna."
Elijah:  "You don't have to be jealous. I don't really pursue younger women. (Alaric gives him a worried look) It's a joke, Ric, lighten up."
Alaric:  "Right."

Damon: "There's no such thing as a bad idea. Only poorly executed awesome ones."

Elena: "He described you as a monster."
Stefan: "That's what I was."

Stefan: "Elena, you've agreed to sacrifice yourself to Klaus. To say that we have a difference of opinion is the understatement of the century."
Elena: "You would know."

Jenna,Alaric and Elijah near Fell property

Elijah and Alaric talking about Jenna

Alaric and Damon talking about their friendship 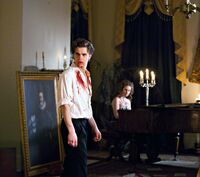 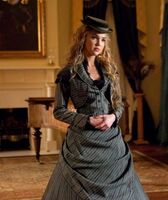 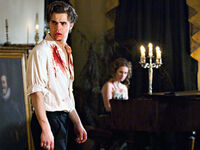