The Hand of Glory

The Hand of Glory

The Hand of Glory is a Dark Object created and cursed by an unknown witches at some point in history. By appearance, it resembles a large dark red or black candle held by a hand-shaped candelabra. Each candle was magically imbued to open supernatural windows, even to that of the New Orleans Afterlife. It was one of the Dark Objects that the Sisters owned. To date, there have been three known to be in existence.

The Hand of Glory may be a severed forearm of a mummified human. Once lit, the candle opens a supernatural window and enables interaction with the Ghosts world; this until the wax burns. Once the candle is consumed, the connection with the afterlife is ended.

In Heart Shaped Box, Aya gives Davina an Hand of Glory preserved in an old trunk at the Sisters Coven's headquarter, so that the young witch can use it to contact the spirit of her beloved Kol and the dead witch could help Davina to complete the spell that will release the sirelines from the Mikaelsons. Davina activates the candle and is able to open a window and see Kol, however, in order to save Hayley Marshall-Kenner, Kol channels the magic of the candle and shortens its use. The candle burns out sometime later and the window is shut.

In Where Nothing Stays Buried, Freya performed a ritual channeling both the power of the Hand of Glory and that of her brother Elijah in order to bring back Davina's spirit from the Ancestral Plane to prevent the young witch from being hounded by the Ancestors who wanted to destroy her, sealing her spirit inside a circle made with an unknown black powder.

In One Wrong Turn On Bourbon, Roman finds a Hand of Glory in a case when he is looking around the Abattoir. 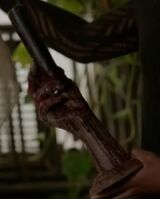