THE NEW ORDER — Klaus puts a plan in motion that will give him even more power, but even with the unwilling participation of Werewolf Ray Sutton, things don't go exactly as Klaus had planned. Damon and Alaric reluctantly go along with Elena's new strategy to find Stefan, leading Damon into a dangerous fight with an unexpected enemy. Jeremy turns to Matt for help as he continues to try to understand what the Ghost's from his past want from him. Unaware that Caroline is in need of his help, Tyler faces an emotional confrontation with his mother.

Damon sees a news report about the death of Andie Star — Stefan's latest victim. Elena tells him Stefan called her. Sheriff Forbes traced the call to Tennessee. Damon thinks Stefan is gone. "And I don't mean geographically," he says and burns papers in his fireplace.

Alaric wakes up with a wicked hangover to loud pounding on his door. Elena asks what he knows about Stefan and Tennessee. She refuses to give up on him. Alaric tells her Klaus and Stefan have been tracking werewolves.

Smoky Mountains, Tennessee. Stefan carries Ray's body through the woods with Klaus. He's not happy about it. With a body on his shoulders, Stefan and Klaus wander into a werewolf pack. Stefan tosses down the body and then Klaus introduces himself and they quickly recognize him as "The Hybrid".

At her house, Carol pours herself a stiff drink. She dumps vervain into the coffee and then feeds it to her son. She busts him for having a girl over. He didn't know she snuck out. He takes a drink of coffee, but doesn't react. She's relieved. She calls someone named Bill. "I've gotten myself into a bit of a vampire situation," she tells him.

At work, Jeremy tells Matt he saw Vicki again. He wants to try contacting her. At first Matt doesn't want to contact Vicki, but agrees to help when Jeremy says she said "Help me." At the Grill, Tyler gives Elena information about where a local pack shifts on a full moon, she then gets Alaric to go on the hunt when her.

Back at the camp, Ray wakes up needing human blood to complete his transition to become a vampire. If he doesn't get it, he'll die. Klaus sniffs a man out and bites into him to get things started. They feed him to Ray while Klaus feeds another werewolf his blood. "Okay, who's next?" he asks the group.

Back at the Grill, Tyler asks Matt if he's seen Caroline. Matt's about to blow him off, when he realizes tonight's the full moon. Caroline usually helps him. Tyler tries the coffee and notices it's off, too. He says something. Matt tells him the sheriff makes him put a little in the coffee. Tyler realizes it's what he had at home.

Back at his house, Carol lets Bill in. She tells him about Caroline. She hasn't told the council yet. "I can't get my hands dirty here for a lot of reasons," she tells him. Alaric leads Elena to a ridge in the woods. He brought all matter of vampire and werewolf weapon. He gives her a wolf's bane grenade. She lends him John Gilbert's ring. It won't work on her because she's a doppelgänger.

Elena is standing by a pond when suddenly she's shoved through the air into it, mid-sentence. It's Damon. Alaric told him they were going. Klaus continues to keep the human alive and compels him to stay put. Everyone else is dead. He wakes for Ray to turn so he'll have "comrades" in a war. They notice Ray is bleeding from his eyes, which isn't supposed to be happening. Damon tries to convince Elena to bail, since Klaus thinks she's dead. They have a moment standing in the lake together. He finally relents.

Back with Ray, he's not doing well. Klaus is about to feed him more human blood. Ray gets up and runs off. Klaus sends Stefan after him. Ray bites Stefan and runs off. Stefan hears Elena and Damon in the woods.

Klaus can heal Stefan with his blood. He refuses to until Stefan finds Ray. Meanwhile, all the werewolves are coming to and bleed from their eyes, transforming. Tyler comes home and confronts his mom about the vervain. She admits she was testing him because of Caroline. She says he can't be with Caroline because she's a monster. "You don't know about me, do you?" he asks.

Damon, Alaric and Elena run into Ray walking through the woods. He rushes Damon and has the upper hand. They try vervain darts, but they do nothing. Elena tosses Damon the wolf's bane bomb and that scalds him. They realize he's a hybrid.

Matt and Jeremy go through Vicki's things to find a personal item to help contact her. Looking at a picture of her, Matt is overwhelmed and tells Jeremy he can't. As he's standing there, he hears a noise and feels a shadow. When he looks back, the picture has moved. Alaric, Elena and Damon tie Ray to a tree with everything they have. It's broad daylight, but he wakes up and starts to turn. They run.

Back in the werewolf camp, the half dead werewolves are moving like zombies, but they're angry. They start to circle Klaus. Night has fallen and Alaric, Damon and Elena run through the woods when she trips. Suddenly, there's a snarling wolf in front of her. Damon calls for it and runs off to make it chase him. Elena wants to go after him. Alaric insists they keep moving.

Tyler marches his mom down to the cellar and chains himself to the floor. "You think Caroline's the monster, I'm the monster, Mom." he says. He locks her in the dungeon and tells her he and Mason got the family curse. He starts to turn. Carol screams in horror. Damon creeps through the dark woods in the moonlight. Ray runs up on him in a frenzy and swings at him. Ray's stronger and faster than him. He grabs hold of him and is trying to bite down when suddenly Ray goes limp. Stefan stands there holding Ray's heart.

Stefan tells Damon not to follow him and says he's never coming back. Back at the car, Elena is frustrated to have left Damon in the woods. Alaric wants to keep her safe. She uses it as an opportunity to give him a pep talk on being there for each other since everyone else is gone. "I'm keeping the ring, then," he says.

Damon walks up to the car. Stefan watches them go. Elena looks up in the woods and thinks, for a moment, she sees him. Matt knocks on Jeremy's door with a six pack. He went through all Vicki's things. He appreciates Jeremy got her. He brought a bag of her stuff. Jeremy tells Matt they took away his memory of her dying. Suddenly, Jeremy sees her in the room. He asks how he can help. She tells him she can come back and wants his help. Then she crashes through the glass door. Suddenly, Jeremy hears another voice. It's Anna. She tells him not to trust Vicki.

Stefan brings Ray's body back to camp, again. Klaus tells him the others went rabid. They're all dead. He's angry and screams at the moon. "I did everything I was told! I killed a werewolf, I killed a vampire, I killed the Doppelgänger. It should have worked."

Klaus drains some of his blood for Stefan. "We're leaving," Klaus says. "It appears you're the only comrade I have left." Elena comes into her bedroom to find Damon. He says he saw Stefan. He was wrong about him being gone. She asks if he's okay. Damon says he's not and is "an insufferable martyr and he needs his a--kicked, but he can be saved."

He changed his mind because even in his darkest place, Stefan couldn't let Damon die. He says he'll help her. Damon asks Elena what changed her mind about leaving the mountain. He badgers her into admitting she was worried about him. She asks why he needs to hear it. "Because when I drag my brother back from the edge and deliver him to you, I want you to remember the things you felt while he was gone," he says, looking deep into her eyes. Alaric sees Damon leave and looks at Elena. "Know what you're doing there?" he asks. "No, I don't," she says.

Tyler wakes up, naked and chained to the floor. His mom is crying in the cell. She promises to make sure nothing will happen to Caroline. Carol calls Bill, wanting to back out. He wants to go forward. Caroline is seen in a cellar chained to a chair. Bill comes in. "Daddy?" she says.

Elena: "How do you feel about a little hike through the Smoky Mountains?"
Alaric: "You wanna hunt down a pack of werewolves on a full moon?"
Elena: "We'll be out of there before the moon is full. If you don't come with me, I'm going by myself. What? You're the one who told me that I could handle things on my own now."
Alaric: "Yeah, I meant like frozen dinners and SATs. A-all right fine. Let's just... Let's just go. But, uh, you're driving."

Elena: "You're better at it than you think, you know?"
Alaric: "Oh, boy, are you a sucker for a lost cause or what?"
Elena: "You're not a lost cause, Ric. You're just lost. But so is Jeremy, and so am I. Our family is gone. We don't have anybody. I'm sorry, but you don't have anybody either, so... We're kind of good for each other."
Alaric: "I'm keeping the ring, then."

Elena: "Are you okay? Did you...?"
Damon: "Fine, bite-free. Get back in the car, please."
Elena: "Can you just give me a minute to appreciate that you're not dead?"
Damon: "I'll give you ten seconds. Nine, eight..." (He catches her and pushes her toward the car) "Hey, Ric, did you happen to see where I parked my car?" 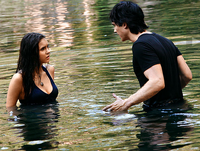