THE HUNTER'S MARK — Stefan and Klaus form an uneasy alliance to try and contain the danger that Connor has unleashed on the town. When Connor takes Jeremy, Matt and April hostage at the Mystic Grill, Stefan and Damon have a serious disagreement about the best course of action, and Elena is again caught between the two brothers. The situation quickly turns violent when Klaus sends one of his Hybrids, Dean to stand up to Connor but is killed during the attempt. Caroline is surprised to find Hayley, Tyler's friend, at the Lockwood Mansion. Meanwhile, Professor Shane works with Bonnie to help her get past her fear and guilt.

The episode starts with Connor as he entered his trailer with the head of Nate which is wrapped up in white linen and he placed Nate's head on the counter top, next to an empty glass bottle. Then we see Connor, as he extracted venom from the head of Nate with a syringe before he filled a bag full of weapons.

Connor walked across towards the Mystic Grill with his bag of weapons in tow. We see Jeremy at work in The Mystic Grill and was bringing things into the store cupboard at the back of the establishment, as he entered the storeroom he heard a sound and then he is quickly ambushed, confronted and threatened by Connor, insisting that they talk about Vampires.

Elena awoke and wrote in her diary and began to lament for her human life and express dislike for the person she had become, in another split scene Stefan is shown writing in his diary about Elena. Stefan gets a text message from Klaus telling him that they have a problem. He rang Klaus who was in Italy. Klaus told him that Connor has escaped and that he had undoubtedly procured Werewolf Toxin from the head of Nate, Klaus was hard at work in Brienno digging up Alexander's body in order to get to The Hunter's Sword. Klaus ordered Stefan not to tell anyone else about the Cure, to keep Connor alive and to keep Damon in check. Klaus gave Stefan an ultimatum and told him that he must keep quiet or Klaus will throw The Sword into the sea and therefore take away any chance of Elena ever being Human again.

Matt is setting tables at the grill and April walks in asking for Rebekah. Connor walks in with Jeremy. We see Damon walk in while Elena is in her room, he demands Elena's phone to call Stefan because he thinks he's avoiding him. Damon's surprised when it goes straight to voice mail.

Connor then tells April and Jeremy they've been compelled, then he textes Damon, Stefan, and Tyler. Elena, Damon and Stefan and Caroline are making a plan to kill Connor.

Damon: "So we each take a different entrance and hit him at the same time."
Elena: (Stefan enters and Elena goes to hug him) "Stefan."
Damon: "Where the hell have you been?"
Stefan: "Coming up with a plan." (Elena hugs Stefan)
Damon: "Yeah? We have a plan. Plan is I'm going to rip Connor's heart out and feed it to him."
Stefan: "That's not a plan. We need to be careful. Connor has Jeremy and who knows how many other hostages."
Damon: "Hence the open-heart surgery."
Elena: "Damon's right. Connor is strong but he's not going to be able take all of us at once."
Tyler: "I called they hybrids. They are up, too." (Caroline walks in)
Caroline: "My mom put squad cars blocking the streets. They're saying it's a faulty gas main. We're good to go."
Damon: "Good. Great. No cops, no witnesses, no reason to wait around."
Stefan: "Alright, hold on. We are not all going."
Tyler: "He shot me like nine times. If we are killing him, I want in."
Elena: "He's got Jeremy. I'm going."
Stefan: "Listen, nobody is going anywhere until I figure out what we're walking into."
Damon: "Until you figure it out? Is that you've been all morning? Out buying bossy pants?"
Stefan: "This guy is known for setting traps, alright? We'll be pretty dumb to walk into him especially if has werewolf venom."
Elena: "Does he?"
Stefan: (turns to Elena, looking flustered and guilty): "He's had it before."
Damon: "Fine. Fine. You want to take some time to do recon? You get one hour. But, we need some extra help. So, where the hell is the Wicked Witch of the West?"
Caroline: "She can't do magic."
Damon: "Really? Call her. Tell her Jeremy's life is in danger. Maybe that'll bring her out of retirement."

Elena: (Damon enters Elena's bedroom abruptly as she opens the door) "Oh. Excuse me. What are you doing?"
Damon: (walks past Elena and turns to face her) "Where's Stefan?"
Elena: "Okay, uh, good morning to you too."
Damon: "Well, he's not answering his phone, and he's not here, which, you know, big deal-- we've only got a killer vampire hunter on the loose."
Elena: "I haven't talked to him yet today."
Damon: (walks toward Elena) "Mmmmm. Gimme your phone. Maybe he's dodging me."
Elena: "Why would he be dodging you?"
Damon: "Ooooooh, I don't know, maybe the hot, sweaty, dance party business. I figured you spilled your guilty little guts the minute I left last night." (He watches as Elena rummages through her purse for her phone, looking flustered) "Ooooooooh, you didn't tell him, did you?"
Elena: (hands Damon the phone) "No, I didn't tell him that I got high on blood like some crackhead and then dirty-danced with you. It was a mistake, okay? I wasn't... myself. And besides, he has enough on his plate with trying to get me through this vampire stuff."
Damon: "Oh, I see, this is classic shame-spiral."
Elena: "I'm not in a shame-spiral."
Damon: "Oh, you so are. Newbie vampire remorse. Woooof, it's worse than a hangover."
Elena: "I'm not in a shame-spiral, Damon."

(Elena and Stefan are both writing in their journals)
Elena: "Dear Diary, I know it's been a while. A long while. I haven't needed... I haven't wanted to write this stuff down. But I don't wanna say it out loud either. The thing is, I'm a vampire. And I hate it."
Stefan: "She's been spiraling since her transition. There are times I barely recognize her. But now, for the first time in a while, there's hope."
Elena: "I feel hopeless, depressed, angry. But most of all, I'm scared."
Stefan: "Somewhere in the world, there's a cure for vampirism. If I can get it, Elena can be human again. I can give her back her life."
Elena: "Part of me just wants to end it. But then I think of Jeremy. I'm all that he has left. So, I need to find a way through this. No matter what it takes."
Stefan: "So, that's what I need to do. No matter what Klaus asks, no matter what lies I have to tell or secrets I have to keep, I'll do it. No matter what it takes."

He explains to her there are several ways to skin a cat.

Tyler is not buying it.

May I suggest an option that does not involve killing? Or is this the wrong crowd?

I'll just rip his heart and serve it to him on a plate!

Seriously, you can't do that! Klaus would kill me! Literally!

Mom has just isolated the area with a lame excuse about a gas leak.

Seriously? Do you want me to believe that????

Hello and who the hell are you?

Don' mind me, I have been living here for a few days...

I sure hope the insurance covers the damage to the Grill or we are both out of jobs...

Elena fights for her life.

Not to self: Ripping their hearts out DOES kill them, as I suspected... 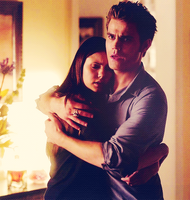 Connor heads to the Mystic Grill - not for coffee...

Connor's secret cache of weapons under the floor

Extracting werewolf venom - from the gums?????

So? Killed enough vampires yet?

Why did you send me to that vampire infested town????

Which of your vampire friends I should call first?

Seriously Nate, you don't have to blindly obey Klaus!

You have been warned, Nate! 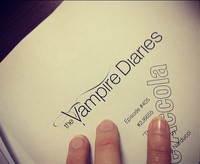 Retrieved from "https://vampirediaries.fandom.com/wiki/The_Killer?oldid=2785672"
Community content is available under CC-BY-SA unless otherwise noted.