KLAUS RETURNS TO HIS PAST IN NEW ORLEANS - Acting on a mysterious tip that a plot is brewing against him in New Orleans, Klaus makes a trip to the town he and his family helped build. Klaus’ questions lead him to a reunion with his former protégé, Marcel, a charismatic vampire who has total control over the human and supernatural inhabitants of New Orleans. Determined to help his brother find redemption, Elijah follows Klaus and soon learns that Hayley has also come to the French Quarter searching for clues to her family history, and has fallen into the hands of a powerful witch named Sophie. Meanwhile, in Mystic Falls, Damon and Stefan continue with their plan for Elena, while Katherine reveals a surprising vulnerability to Rebekah and asks her to deliver a message.

Katherine: "Klaus is gone."
Stefan: "Wait, what do you mean Klaus is gone?"
Tour Guide: "Welcome to the dark side of New Orleans, where the living are easily lost and the dead stick around to play."
Marcel: "Niklaus Mikaelson; my mentor, my savior, my sire."
Klaus: "Marcel has got everything I ever wanted. Power, loyalty, family. I want what he has. I want it back. I want to be king."

Rebekah: "New Orleans? What the bloody hell is he doing there?"
Elijah: "Evidently there are witches conspiring against him. So, knowing our brother, this was a mission to silence and slaughter."
Rebekah: "Well the French Quarter witches are not a lot to be trifled with. You don’t suppose they found a way to kill him once and for all, do you?"
Elijah: "Rebekah, in the name of our family, you might try to dial down your glee."
Rebekah: "What family? We are three distrustful acquaintances who happen to share a bloodline. I, for one, hope they found a way to make that traitorous bastard rot."

(Elena is gasping for breath after having been locked in the cellar of the Salvatore boarding house without blood for some time)
Damon: "That's the calmest desiccating vampire I've ever seen. I remember when you starved me down there for three days-- I would've wept at your feet for an orange peel."
Stefan: "Look, she's not going to beg for blood. Begging means desperation, emotion; she's still in no humanity zone."
Damon: "How hungry does she have to be before we can torture some feelings back into her?"
Stefan: "A lot hungrier than she is now, apparently."
Damon: "So, what are we supposed to do in the meantime?"
Katherine: "Maybe I can provide a little excitement."
Stefan: "Katherine?"
Katherine: "The one and only... sort of."

Elijah: "You want to know what the witches have in store for you? Follow me."
Sophie: (to Klaus) "I'm going to stop him, and you're going to help me."
Marcel: (to Klaus) "What's mine is yours, but it is mine!"
Marcel: "I'm the king!"
Katherine: "Klaus won't be able to walk away from this."

Klaus: "No. It's impossible. Vampires cannot procreate."
Sophie: "But werewolves can. Magic made you a vampire, but you were born a werewolf. You're the Original Hybrid, the first of your kind, and this pregnancy is one of nature's loopholes."
Klaus: (to Hayley) "You've been with someone else, admit it!"
Hayley: "Hey, I've spent days held captive in a freaking alligator bayou because they think that I'm carrying some magical miracle baby. Don't you think I would've fessed up if it wasn't yours?"
Sophie: "My sister gave her life to perform the spell she needed to confirm this pregnancy. Because of Jane-Anne's sacrifice, the lives of this girl and her baby are now controlled by us. If you don't help us take down Marcel, so help me, Hayley won't live long enough to see her first maternity dress."

Klaus: "For a thousand years, I lived in fear. Any time I settled anywhere, our father would hunt me down and... chase me off. He made me feel powerless, and I hated it. This town was my home once, and in my absence, Marcel has gotten everything that I ever wanted. Power, loyalty, family. I made him in my image and he has bettered me. I want what he has. I want to be king."
Elijah: "And what of Hayley and the baby?"
Klaus: "Every king needs an heir." 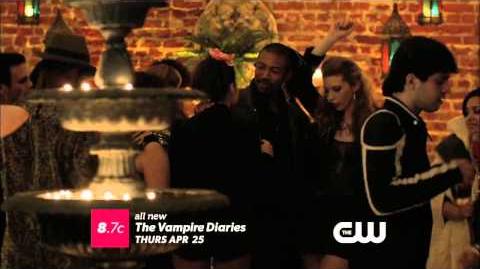 Retrieved from "https://vampirediaries.fandom.com/wiki/The_Originals_(Episode)?oldid=2720449"
Community content is available under CC-BY-SA unless otherwise noted.