A SENIOR PRANK NIGHT TO DIE FOR — Despite all that has happened, Caroline is determined to see that Elena, Bonnie, Matt and Tyler all enjoy the traditional Senior Prank Night before the school year begins at Mystic Falls High School. However, when uninvited guests show up, it doesn't take long for the evening to take a deadly turn. Damon convinces Jeremy that he can use his new connection to the other side to help find a way to defeat Klaus. Finally, Klaus deepens his hold on Stefan and uses him for an increasingly violent and dangerous purpose.

Things pick up quickly from where they left off as the seniors of Mystic Falls High prepare for the first day of their final school year by setting up pranks around the school in a time honored tradition. Klaus and Rebekah turn up unexpected at the school. After capturing Elena, Klaus proceeds to feed his blood and temporarily kill werewolf Tyler and tasks Bonnie with finding out why this act hasn't turned other werewolves into hybrids yet.

Knowing there is only limited time before Tyler will die, Bonnie races off with Matt to find Jeremy whom she believes can help her make contact with an elder witch in the afterlife who might have some answers. Stefan eventually shows up at the high school gym where all of this is going down and tries to pledge his loyalty to Klaus once again by killing two hapless teens. This works for a second, until Rebekah figures out that Elena used to be in possession of her magic necklace. Elena admits that Katherine has it now, but they don't believe her and therefore, set a time limit for the necklace to show up. If it doesn't arrive, Klaus compels Stefan to feed on Elena.

Meanwhile, Bonnie and Matt search around for Jeremy, but can't find him. Turns out he's in the trunk of a car being driven far away by Damon and Katherine. He is along for the ride only so they can use him to communicate with his dead girlfriend Anna who happens to have information about Mikael, who is a vampire that hunts vampires, who was most recently hunting Klaus and Rebekah. They get some info about where this Mikael is entombed (by torturing Jeremy), but then Damon gets frantic texts from Bonnie about what's going on, so he dashes off to the rescue despite Katherine's urgings not to.

At this point, Bonnie and Matt still can't find Jeremy so Matt decides to take one for the team by drowning himself and hopefully communicate with his dead sister Vicky, who has been haunting him recently. His plan works and after Bonnie does CPR, he is able to give info directly from Vicky that Klaus's transformations aren't working because Elena isn't dead. Back in the gym, time runs out and Stefan tries not to drink Elena's blood, but Klaus compels him to turn off his feelings, so Stefan has to drink Elena's blood.

Klaus feeds some of Elena's blood to Tyler and it stops him from potentially dying by turning him into a werewolf-vampire hybrid like Klaus. But instead of being grumpy about it, Tyler actually ends up being the happiest we've ever seen him. All of this means though that rather than let Stefan kill Elena, Klaus is just going to keep her around as his personal little blood bank to continue turning werewolves into hybrids. He apparently reached this conclusion on a whim. Too bad his plan is foiled when Damon shows up, mentions that Mikael is coming and sends him running for cover.

Then Stefan arrives as the new house guest for Damon. Jeremy and Katherine arrive at a tomb that presumably is the one Mikael lies in. Katherine flings the gates open and pushes the cover off of the crypt, revealing the body of Mikael, wrapped in chains. The episode ends with the shot of Mikael opening his eyes.

Bonnie: "Listen to me, I know you wanna help and I know you miss your sister, but what you did was reckless and stupid."
Matt: "I know, Bonnie. I know. But it worked. It was worth it."
Bonnie: "You don't want to be part of all this, Matt. You're the only one of us who actually gets to live their life like a normal person, no matter how lost you feel. Don't forget that."

Elena: "Where were you, Damon?"
Damon: "I shouldn't have left. I promise you, I will never leave you again."

Rebekah: (to Stefan) "You took a beating. My brother's been breaking your neck all afternoon. Quite the temper."

Klaus: "Attention, seniors! You have officially been busted. Prank night is over. Head on home."

Klaus: "Fascinating, I've never seen this before. The only thing stronger than your craving for blood is your love for this one girl... Why don't you turn it off?"

Damon: (to Katherine after making out with her) "Thought I'd give it a shot. Truth is, you just don't do it for me anymore."

Caroline: "Do you think Matt's gonna be okay?"
Tyler: "I'm kissing you and you're wondering about your ex-boyfriend."

Matt: "Do you realize that just last summer, you and I were lifeguards at the pool?"
Bonnie: "Hmm."
Matt: "And the only two problems I had in my life were that Elena was breaking up with me and I sucked at CPR."
Bonnie: "Everything was so different then."
Matt: "Yeah, I know. Elena's dating a vampire, you're a witch, my sister's a ghost, and I'm just a guy who's wondering how life got so screwed up."

Klaus: "I assume you're the reason Elena's still walking around alive."
Bonnie: "That's right. If you wanna blame someone, blame me."
Klaus: "Oh, there's no need for blame, love. Just your witchy interference seems to have caused some undesirable side effects. And, since you caused the problem, I'm gonna have you find the fix."

Klaus: "Every time I attempt to turn a werewolf into a vampire hybrid, they die during the transition. It's quite horrible, actually."
(Klaus feeds Tyler his blood)
Klaus: "I need you to find a way to save my hybrids, Bonnie. And for Tyler's sake, you' better hurry."
(Klaus snaps Tyler's neck)

Matt: (about Tyler) "He killed him."
Elena: "He's not dead. Klaus' blood will turn him into a vampire."
Klaus: "And if Bonnie's successful, he'll live through his transition. (to Bonnie) Go on, then. Go and fetch your grimoires and enchantments and whatnot. I'll hold on to Elena for safekeeping."

Bonnie: "I can't contact the dead, but Jeremy can."

Katherine: "What if I told you there was a way to kill Klaus? And not dagger dead. Dead-dead."
Damon: "I'd say you were desperate and lying. Or drunk. Or a desperate, lying drunk."

Klaus: (to Stefan) "All I wanted was your allegiance. Now I'll have to take it."

Katherine: (to Damon) "My advice: If you want to make an omelet you have to break a few legs."

Rebekah: "Why is that doppelgänger bitch wearing my necklace?"

Matt: "You don't need magic, Bonnie. You just have to be better than I was at CPR."

Stefan: (to Elena) "The more blood I get, the more I want. And if I get so much as near yours, you are dead."

Klaus: (to Stefan) "Come on. Your humanity is killing you!"

Klaus: "You know how much the Original witch hated me. Do you honestly think I would do anything other than the opposite of what she says?"
Rebekah: "One thousand years in the grave, and she's still screwing with you."

Stefan: "I've done everything Klaus has asked me to."
Rebekah: "No, you just failed to mention that the doppelgänger's still alive."
Stefan: "Where is Klaus now?"
Rebekah: "With any luck, ripping that cow's bloody head off."
(Stefan leaps at Rebekah)
Stefan: "Where is she!?"
Rebekah: "You really do love her, don't you?"
(Rebekah hits Stefan with a crowbar)
Rebekah: "Consider me jealous."
(Rebekah stabs him through the chest with the crowbar)

Stefan: (to Elena) "I owe you everything. Because through all of this, you are the one thing that kept me from giving up, from turning it all off."

Tyler: "This is going to be an amazing year."

Klaus: "There's my girl."
Elena: "Klaus."
Klaus: "You are supposed to be dead. What are we gonna do about that?"

Klaus: "I'd like you all to meet my sister, Rebekah. A word of warning, she can be quite mean."
Rebekah: "Don't be an ass." 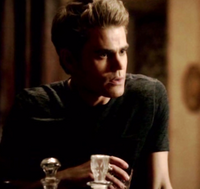 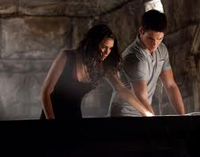 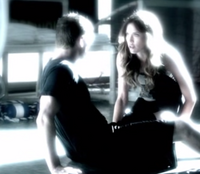 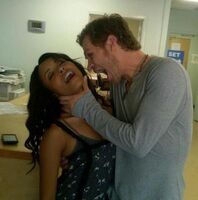