The Sword of Alexander is a sword used by Alexander, one of the original members of the Brotherhood of the Five, the order of vampire hunters. The sword was used against many vampires and had a symbol on it used to decode the tattoo on each member's body, which was a map that led to the Island where Silas was buried with the Cure for immortality.

The original members of the Five each received swords from the dying witch who turned them into supernaturally-enhanced hunters, and each sword bore the symbol. Rebekah Mikaelson was in a relationship with Alexander in the 1100s before he and his order daggered all of the Mikaelson siblings. Since Klaus, who had werewolf heritage, was unaffected by the white oak ash daggers the hunters used, he killed all five of the men in outrage and un-daggered three of his four siblings. Despite the fact that Alexander had betrayed her and her family, Rebekah was still heartbroken, and she buried Alexander's sword with his body in the church they had chosen for their wedding, San Vittore in Brienno, Italy. Klaus later excavated and found the sword in the Season Four episode The Killer, as it was revealed that the sword could be used to decrypt a Hunter's Mark that would lead him and the Mystic Falls Gang to a cure for immortality.

After discovering in O Come, All Ye Faithful that the sword can be used to decrypt a map to the cure, Stefan Salvatore attempted to steal it from Klaus' safe, not knowing that Klaus had already moved it to a new location. That night, after Hayley Marshall told Klaus of Tyler Lockwood's plans with to have Klaus' former pack neutralize him, he used the sword to kill his twelve remaining hybrids. This turned out to be part of a secret plan by Atticus Shane (who had manipulated Hayley into helping him) to have twelve hybrids killed by Klaus to fulfill the second point of the Expression Triangle.

In Down the Rabbit Hole, while Klaus was trapped in the Gilbert House, Tyler and Caroline Forbes found the sword where Klaus had hidden it and discovered the cryptex under its hilt. With Klaus' help, he translated the ancient text on both the Hunter's Mark and the inscription on the sword's hilt to learn what was necessary to find the cure:

"Requires a powerful witch and a hunter in full bloom. Silas rests on the far side, the means of his destruction at hand. The top of the hilt reveals the key to a nautical map."

The sword is excavated in Italy 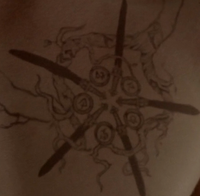 The exposed hilt of the sword

Retrieved from "https://vampirediaries.fandom.com/wiki/The_Sword_of_Alexander?oldid=2767688"
Community content is available under CC-BY-SA unless otherwise noted.