They’re back – and they’re not alone. The seductive characters of The Vampire Diaries return for a stunning 5-Disc 22-Episode Season Two. This time Elena, Stefan, Damon and the other residents of Mystic Falls are joined by sinister new blood. Released from the tomb, Katherine unleashes her personal brand of evil in a diabolical plot. The Originals – the world’s oldest and most dangerous vampires – hunt for Elena, who discovers she has a terrifying connection to their world. And now bloodsuckers aren’t the only monsters in town. On moonlit nights, werewolves roam in search of victims…including vampires, who succumb to a single werewolf bite. The Vampire Diaries: unending suspense, undying romance. 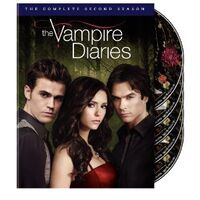 Retrieved from "https://vampirediaries.fandom.com/wiki/The_Vampire_Diaries:_The_Complete_Second_Season_(DVD)?oldid=2767531"
Community content is available under CC-BY-SA unless otherwise noted.