SOMETHING WICKED — As Graduation Day approaches, Caroline tries to distract Elena by focusing on simple tasks like sending out announcements, but Elena won't be swayed from her new obsession. Sheriff Forbes calls Damon and Stefan to the hospital, where someone has been attacking patients. Still trying to force Katherine to help her, Bonnie refuses to give up on her plan to defeat Silas. As a violent wind storm causes a power outage in Mystic Falls, ghosts suddenly appear – some with good intentions while others are bent on revenge.

Bonnie has a meeting with Katherine and promises her an invincibility spell in exchange for Bonnie's ancestor's tombstone, and that she will get the invincibility spell in a meeting with Qetsiyah after she manages to get the veil to the Other Side down with the tombstone and the two travel to every part of the Expression Triangle. Accessing its power causes a power failure in the whole town. Bonnie tells Katherine to give her Qetsiyah's tombstone.

Meanwhile, Bonnie holds Qetsiyah's tombstone and blood starts to flow out of the stone's cracks. Then the torches nearby ignite and Bonnie opens her eyes saying its done and that the veil's down. Damon tells Elena that he will not let her go any further because she is only after Katherine. Frustrated, Elena injects Damon with vervain and goes deeper into the school. Bonnie is trying to call on Qetsiyah, but Katherine hears someone coming and asks Bonnie to break the link that Bonnie had created between the two of them earlier so she can go distract the vampire that is coming. Bonnie angrily tells her to go and Katherine walks out of the cave where the spell is being done.  Katherine looks for the person who is attacking and is jumped by Elena. Elena attacks her and says that Katherine has ruined her happiness and before she can kill Katherine, Stefan stops her quickly. Stefan tells Katherine to get out and tells Elena that she would've killed her best friend had she killed Katherine, she would've killed Bonnie because of the link.

Rebekah witnesses her deceased brother Kol walk into the bar and is stunned. He wants to know where Elena is without much success, so in his fury, he stabs Matt right beneath the shoulder and leaves. Matt and Rebekah grow closer when she helps remove the glass used by Kol to pierce his shoulder. She asks him why he won't let her help him with her vampire blood and he tells her that it has nothing to do with her and that people have a bad habit of turning into vampires in their town and that he wants to stay human. Rebekah is looking for some ice to help Matt's pain when she finds Caroline slashing her wrists with a knife and she keeps musing that Silas wants her to keep cutting - implying that it is Silas and not Caroline who is at the school.

Caroline/Silas enters the room where Bonnie is and tells her to unlink her spell to Katherine as she feels the pain that Katherine is feeling when being killed by Elena. Bonnie unlinks herself and Katherine and Silas reveals himself and that he has been in her mind all along and that she never cast him out and that the monster was what he wanted her to see. He then says he is more powerful than she can imagine and comments that he defeated the Hunters' Curse in minutes. Silas then makes Bonnie believe that she is suffocating and disappears. Elena goes to Jeremy's grave and apologizes for not being able to kill Katherine for him in tears. Elena is then attacked by Kol and she says that he should kill her, he'd be doing her a favor and he says with pleasure before being attacked by a revived Jeremy who asks how many times he needs to kill him before Kol's neck is snapped by Stefan. Meanwhile, Bonnie is told by her revived Grams that she must feel the air in her lungs and she breaks Silas' illusion. Bonnie hugs her and tells her she is sorry. Sheila tells her that Expression is an extension of who she already is and that the power was there and she doesn't need Qetsiyah's help to take Silas down, the magic she has is strong enough, she just has to will it deep enough and it will happen.

Damon finds Alaric who is actually Silas in disguise and Damon can tell, punching him and then putting a chain around his neck and suffocating him as he continues to try to convince him that he is Alaric. Bonnie comes just in time to unleash her potential as a Bennett Witch and an Expression user, doing the spell that Qetsiyah did to Silas thousands of years ago, clotting and freezing the blood-flow in his veins and she comments that she will turn him to stone.

Bonnie destroys his psychic protection and defenses and he begins turning into his true face. Silas, instead of fleeing, rather doesn't want to reveal who he is and he covers his face with with his hands and Bonnie says, "I guess we'll never know", as an answer to Damon's question of who Silas really is. Silas is now a sculpture of stone covering his face.

A little later, Elena is hugging Jeremy, and Bonnie tells them that she will give them as much time as possible, but she is going to re-erect the walls to the Other Side. But when she arrives, her Grams asks her what she is doing and she says she wants to bring Jeremy back. Sheila warns her that Nature's power is too strong and that it cannot be challenged, but Bonnie tells her that Nature has only one form, but Bonnie has done all magic known by the supernatural world. She tells Sheila that "I have every Magic!" "I have Expression," then two pyres behind her ignite, "I have the Spirits," Bonnie says and the candles ignite, "I have the Darkness," she ends and the darkness beyond enters her veins slowly and fills her whole body. Sheila disappears and Bonnie doesn't care, she challenges Nature's Power, fighting Nature and continues to do the spell, "Phesmatos Ravenus on animum." Bonnie then gets consumes by the magic and falls to the earth. Elsewhere, Matt and Rebekah are going out of the bar and see a handsome man in ancient clothes. Rebekah tells Matt that that is her ex-boyfriend Alexander and she attempts to escape, but her path is blocked by other hunters, Connor and Vaughn.

Bonnie wakes up and Sheila is next to her and tells her that the magic was too much for her and that she lost in the battle against Nature. Bonnie sees her body laying down on the floor and is horrified, "Oh my God, I'm dead."

Liz: "There are four other victims, each one of them almost completely drained of their blood. Do you think it's Silas?"
Stefan: "He's fueling up for something big."
Bonnie: "Silas can be anyone."
Stefan: "Silas."
Bonnie: "It's time to drop the veil."
Katherine: "And by 'drop the veil' you mean unleash all hell on earth?"
Damon: "We need to stop Bonnie from doing the spell."
Silas: "You have no idea who I am."
Kol: "Greetings from the dead."

Stefan: "Hey, here you are. Any luck?
Caroline: "I searched the whole school. She should be here. (A strange sound is heard behind Caroline) What was that?"
Stefan: "Hmm. Ice is melting."
Caroline: "This doesn't make any sense. This is the center of the triangle. If she's gonna do the spell, she has to do it here. This is where they should be."
Stefan: "Actually, I think we're in the right place, just in the wrong elevation."

Caroline: "Stamp, please... Thank you."
Elena: "You don't have to pretend to be nice to me, Caroline. I know this is a ploy to keep me distracted."
Caroline: "You're done? I'm only on my second batch."
Elena: "We have family friends in Denver... other than that, nobody cares that I'm graduating. And to be honest, neither do I."
Caroline: "I know that's how you feel now, but once you get through this hating Katherine phase-"
Elena: "Wait. Do you know where Katherine is?"
Caroline: "No. Why would I know where she is?"
Elena: "Yeah, but Caroline, if you did, you would tell me, right?"
Caroline: "Elena, you're obsessing."
Elena: (grabs Caroline's arm) "Caroline, listen to me, if you know where Katherine is, you have to tell me."
Caroline: "I don't, Elena. Chill."

Elena: "You don't think I can kill Katherine?"
Stefan: "I don't think you really want to."
Elena: "Maybe you're right. Maybe I just want to feel the warmth of her chest cavity as I rip out her heart and watch her face as she realizes I took it from her. Nah, I just want to kill her. It's that simple. I'm gonna go shower."

Damon: (to Matt over the phone) "Do you have any good news for me, Donovan?"

Bonnie: "There's only been one person that's been able to put Silas down, two thousand years ago, and that was Qetsiyah, so I need to go ask her for some advice."

"Lean on Me" – Telekinesis

"Things We Lost in the Fire" – Bastille 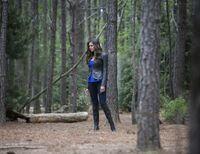 Katherine in the woods. 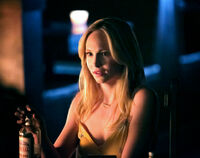 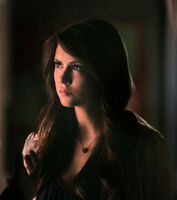 Bonnie and the tombstone 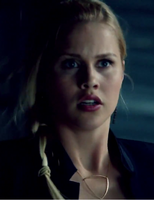 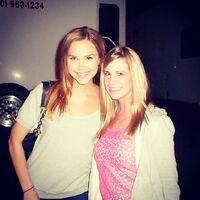 Retrieved from "https://vampirediaries.fandom.com/wiki/The_Walking_Dead?oldid=2787269"
Community content is available under CC-BY-SA unless otherwise noted.