Things We Lost in the Fire

MICHAEL TREVINO RETURNS TO MYSTIC FALLS IN THIS EPISODE DIRECTED BY PAUL WESLEY — With the traumatic effects of the Phoenix Stone taking a toll on his brother, Stefan attempts to help Damon regain his grip on reality, while secretly struggling with his own experience in the stone. Elsewhere, Matt and Bonnie deal with the fallout after Julian and his men take over Mystic Falls, leading Matt to spiral out of control and into trouble with an officer named Penny. Meanwhile, Tyler returns to town for Alaric's baby shower and Caroline makes an upsetting discovery involving Alaric and his future plan for the babies.

When Damon realizes that this time he came back to real life and that he has attacked them for real, he immediately feeds Bonnie and Matt his blood to revive them. Caroline injects him with vervain. He wakes up with his hands tied in chains. Meanwhile Stefan dreams about him drowning, Damon's calling him wakes him up. Stefan explains to Damon that this was to make sure that he calms down, and that what happened wasn't his fault because he came out of the stone and thought that he was still inside. Damon asks for a bro hug but Stefan denies by saying, "Hell messes with you, but post hell is much worse."

Then Tyler shows up for Caroline's baby shower, but he was unaware of Mystic Falls' evacuation due to the Heretics, it is then revealed that Damon had been in the Phoenix stone for weeks, and in that time Julian had taken over Mystic Falls. Bonnie and Matt set up trap for Julian's men, when a dating site matchasingle.com matches them. Bonnie advices Matt to show his softer side. Two cars of Julian's men came towards them and Matt killed them with Bonnie's help saying that he has lost his soft side.

Damon and Stefan argue about Stefan allowing Matt and Bonnie to patrol the streets. Stefan tells Damon about what he had to go through when Damon was in the stone. A flashback of after Stefan came out of the stone is shown where Caroline and Stefan are on a date where he hallucinates the waiter as Damon trying to hurt Caroline with a knife and attacks him. Damon promises to Stefan that he won't have a psychotic break. Stefan says that he will unchain Damon on the condition that he won't leave Stefan's side until he is convinced that Damon is okay. Stefan then leaves to get the keys for Damon's chains. Soon after he leaves Damon starts hallucinating Henry's ghost.

Damon: "I'm a hundred percent okay."
Henry: "Peak-A-Boo."
Caroline: "Something happened in that hell world! Something that you won't admit!"
Stefan: "If wanted to survive. I had to go on without him. So I let him go."

Stefan: "Hell messes with you. Post hell is much worse."
Damon: "I'm a hundred percent okay."
Henry: "Peak-A-Boo."
Caroline (to Stefan):"Something happened in that hell world!"
Damon (to Henry): "Can't you find someone else to haunt!?"
Caroline (to Stefan):"Something that you won't admit!"
Stefan: "If wanted to survive. I had to go on without him. So I let him go."
Caroline: "Hey. How did you do that?"
Alaric: "Well it's a diaper, not a bomb. Though I could dismantle a bomb blindfolded if I needed to."
Caroline: "Ha. Ha. There's nothing funnier than newborns and C4."
Alaric: "So I shouldn't store my explosives in the nursery? I think I read that one in the 20 parenting magazines you left in my office."
Caroline: "Okay. Okay, I get it. I'm the overprotective no-fun surrogate."
Alaric: "No. No. Actually, you are...and incredibly generous friend who I will forever be indebted to."
Caroline: "Well it's not about debt. As long as you understand. Once these babies are born, I will not be on call 24/7 to burp and bathe and feed and diaper...."
Alaric: "I get it, Caroline. I don't expect that to be your problem."
Caroline: "Well it's not a problem. It's just that there's...Ooph! Baby A just kicked!"
Alaric: "What she did? Really? Oh damn! My daughter's in it!"
Caroline: "Oh yeah. There goes Baby B."
Alaric: "What you can tell them apart?"
Caroline: "Of course!"
Alaric: "Oh..."
Damon: "No vervain this time? Are we switching up the menu?"
Stefan: "I just wanted to make sure you had a chance to calm down."
Damon: "Oh I'm calm. No. No. No. You're going to say to me, you're going to say that I screwed up so bad and nearly killed all of our friends because I thought I was stuck in that...fake hell world."
Stefan: "You don't have to explain. It wasn't your fault."
Damon: "Huh?"
Stefan: "It was a honest mistake. You're getting a pass."
Damon: "Wait...You skipped a bunch of stuff. First I say that I see the error of my ways and then you tell me that that's not good enough then you judge me harder and I say something mean but true. Totally throws you off balance."
Stefan: "You came out of the Phoenix Stone but you thought you were still inside of it. Everybody understands."
Damon: "Huh. That's pretty generous considering I just....stabbed your pregnant girlfriend in the chest."
Stefan: "Yeah, well....Hell does a number on you."
Damon: "Yeah..Yeah it does. Well I'm here...and it's real. Ready for my bro hug. I wouldn't until you unchain me brother."
Stefan: "Here's the thing Damon....Um...Hell messes with you. Post hell is much worse."
Damon: "Huh."
Damon: "None of this is real!"
Caroline: "Damon! Don't--!"

Caroline :"Something else happened in that hell world! Something that you won't admit! You can't keep hiding like this Stefan! You can't!"

"After Dark" – The Hot Damns

"I Feel Love (Every Million Miles)" – The Dead Weather

The Vampire Diaries - Inside Things We Lost in the Fire HD 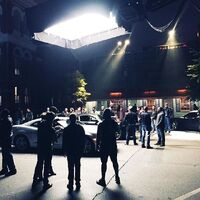 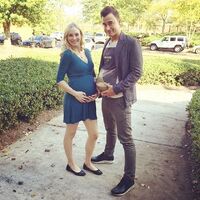 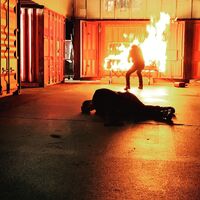 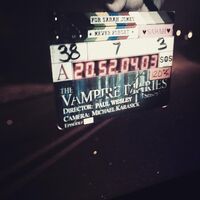 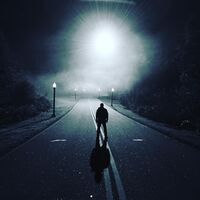 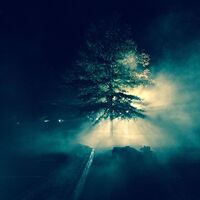 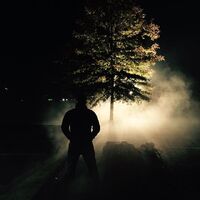 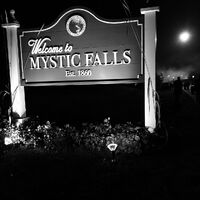 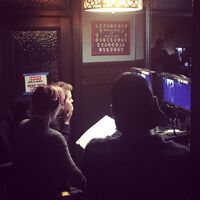 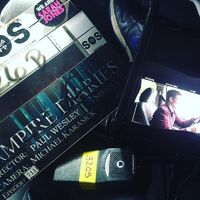 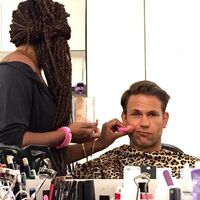 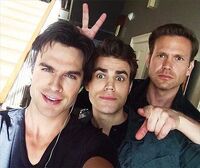 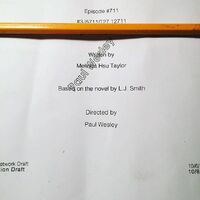