IT'S CHRISTMAS IN MYSTIC FALLS — Hope joins forces with an unlikely ally to take down a Christmas monster, who's using holiday cheer to infiltrate the Salvatore School. Elsewhere, Landon surprises Rafael with news about his family lineage, and Sebastian accompanies Lizzie on her latest mission. Josie and Alaric also appear.[3]

Following on from the previous night, Hope uses Clarke's ring and a spell to disguise Simulandon as Clarke. He begs her to reconsider the situation before tossing him into the Malivore pit; however she declines. This makes him visibly angry and worried about his impending death.

Meanwhile, the Salvatore School begins celebrating when it begins snowing in Mystic Falls. Hope finds this absurd, as does Alaric. Alaric visits the Salvatore School, telling Dorian that he came as quickly as possible when he saw the snow fall, given the message left by the sphinx. Dorian tells Alaric to calm down, and gives him a cup of hot chocolate, which instantly changes his mood, turning him merry like the other students. Hope finds this absurd when she bumps into him in the hallway.

Hope goes to seek Lizzie's help, who is her usual self, joking that Hope can disappear again now that everyone knows she is back. Hope asks Lizzie to go on a trip to find Landon, which confuses Lizzie, who is under the impression that the monsters are no longer after him. Nevertheless, Lizzie obliges when Josie enters acting just as strange as the rest of the students.

On a bus in an unknown location, Landon hands Rafael a birthday card. Rafael remarks that they don't even know when his birthday is, just that it is that month. Inside is a map, and Landon reveals that he had Josie do a lineage spell, which reveals his parents are still alive. Rafael is confused to find that the people who raised him were not his parents.

In the library, Hope is attempting to narrow down the possible monsters responsible for the snow, and cheer, in Mystic Falls. Kaleb jokes about getting on Santa's nice list, however Hope does not appreciate the joke, but remarks that she wishes there was someone around the school as miserable as her. With this, she asks for Clarke's help, although he is reluctant to offer at first. Hope reveals that she doesn't like Christmas as she has nothing to be thankful for given her family situation. Clarke offers his help so long as Hope allows him to enjoy the Christmas spirit for the day.

Meanwhile, Rafael questions why Landon is set on reuniting him with his parents, given his track record in reuniting people with their parents. Landon tells Rafael that he remembers his mother and their meeting and wants to give Rafael the same experience. The two try to leave but are stopped by a man with a shotgun.

At the Salvatore School, Ryan offers advice that the monster they are looking for is the Krampus, someone who seeks out hatred and anger — the complete opposite of Santa. Clarke tosses a wish into the Salvatore fire, remarking that he found a loophole. This angers Hope, who spells him within the library and demands to know what he wished for; however Clarke is reluctant to tell. He eventually reveals that he wished for a savior.

Lizzie and Sebastian are on the road to track Landon. Sebastian is in awe of modern technology, whilst Lizzie tells him that the only reason he is with her is because he keeps her sane. He tells Lizzie that he is hungry and they should stop for snacks, however she tells him that he should've eaten before they left. With this, she tells him there is a deer outside, and when he leaves the car she drives off, leaving him stranded in the middle of the highway.

Meanwhile at the Salvatore School, Hope tries to get everyone's attention to reveal the situation regarding the Krampus. She is unable to talk over the festivities, so resorts to using magic to shock everyone back into reality. This works, and Alaric tells everyone that they need to gather weapons and do their research in preparation for the Krampus' attack.

The man — who is revealed to be Rafael's father — reveals that he knows Rafael is a werewolf. He explains about Rafael's mother, and how she too was a werewolf and also a soldier in the military. Rafael is shocked, but the man eventually asks what Rafael is doing on his property.

Clarke watches as the Krampus arrives at the Salvatore School, pulling a scythe from his bag. Clarke is angry and tells the Krampus that it is not what he asked for, but another trident. The Krampus slashes him, however, before strangling him. Hope saves Clarke and fights back the Krampus. The two team up to fight the Krampus, however he disappears up the chimney. Clarke tells Hope that Malivore knows he is trying to betray him, and that Hope should let him go and he can make it to the portal before he is killed. Hope doesn't believe him, citing that she isn't a fool.

Rafael explains to his father about the anger issues he is facing, and Walt agrees that sometimes running away can seem like the only option sometimes. Landon leaves to get some air, but is stopped in his tracks by Lizzie, who tells him to get in the car.

The Krampus returns back to the Salvatore School, but is greeted by a hoard of students with weapons. Kaleb ties him up, and Alaric shoots him with an arrow, killing the Krampus. Hope questions why Dorian and Alaric are still merry if the Krampus is dead, however Santa emerges from the Krampus' sack, much to everyone's surprise. Santa reveals that he was trapped by Krampus and thanks the students for returning him, however the Krampus is revealed to be alive. The two fight, and with help from Hope, Santa is eventually able to kill the Krampus by heart extraction.

Lizzie confronts Landon over ditching Hope and Josie, and now his attempt to ditch Rafael. Landon tells Lizzie that he is just trying to make sure nobody gets hurt because of him. Lizzie begs him to come back to the school and get help, however before he can comment, Sebastian snaps his neck. Sebastian attempts to change the tire on the car, and questions Lizzie over trying to abandon him. She reveals that nobody — including Lizzie and Hope — like Sebastian. Lizzie tries to convince herself that she doesn't have feelings for Sebastian, however the two end up having sex.

Sebastian explains to Lizzie that he wishes to stay at the school. Not because of her, but because he has nowhere else to go and the school is kind and gives him a reason to live. Lizzie smiles, graciously accepting Sebastian's position at the school.

Alaric holds a present given from Santa as he enters the library. Josie tells him that it is a perfect present for him, and when he opens it, it is a plaque with "Dr. Alaric Saltzman. Headmaster" written on it — making this an official welcome back into his position as headmaster of the Salvatore School. Meanwhile, Santa gives Kaleb his dream car, something he eagerly accepts.

Landon arrives back at the school, much to Hope's surprise, but happiness. The two are about to talk, but Landon asks her to wait, as he needs to have another conversation first. Landon talks with Josie, thanking her for the time they spent together. She begins to cry, realizing that he is about to choose Hope over her. He agrees, but tells Josie that he doesn't regret the time they spent together. Landon leaves Josie alone in her room crying, and goes to talk with Hope. He tells Hope that leaving was wrong, and admits that he loves her, and perhaps always will. She returns the statement, and the two kiss under the mistletoe.

At the Malivore portal, Clarke attempts to jump, but is decapitated by the hooded figure, who is revealed to be the Necromancer. The Necromancer throws his head into the portal, closing it.

Lizzie: "What is happening?"

Ryan: "The krampus. It seeks out hatred and anger."

Santa Claus: "It's the most wonderful time of the year."
Hope: "Santa?"

Carol Singers: [sing]
Hope: "I'm trying to work so if you don't fa la la la leave, I'm gonna' give you all another piercing."
Kaleb: "Whoa whoa whoa sounds like someone could use a little help getting in the spirit."
Hope: "You wanna' help? Find me an axe."
Kaleb: "So that's a neg' on the nog?"
Hope: "I need to figure out what monsters making everyone so freaking merry then kill it."
Kaleb: "Whoa that's naughty as hell, ho. I gotta' do all I can to make it onto Santa's nice list because I've been asking for this one thing every Christmas and I, uh, never got it but I'm hoping this is the year. [drinks] Oh hell yeah, you sure you don't wanna' hit this?"
Hope: "If I started hitting stuff now, I might never stop."

"We Wish You A Merry Christmas" – The Hohohos!

"Move Together (The Dark of The Morning Version)" – James Bay 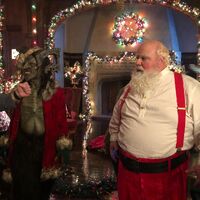 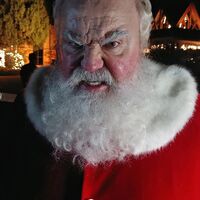 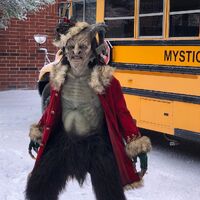 Retrieved from "https://vampirediaries.fandom.com/wiki/This_Christmas_Was_Surprisingly_Violent?oldid=2786273"
Community content is available under CC-BY-SA unless otherwise noted.